About a month ago, I got on a bus to what felt like the middle of nowhere. I was taken about twenty minutes out of central Copenhagen to the industrial area, and then to the mysterious final stop, Refshaleøen Island, that looked a lot more like a set for an episode of The Killing than the venue location for the Eurovision Song Contest. After fifteen minutes of attempting to find the rehearsal space among the abandoned looking shacks, Anders, Ice Cream Cathedral‘s unexpectedly chatty drummer, let me in to a building with multiple soundproofed booths and a familiar weedy odour. The band are crammed into half a booth with notably messier neighbours, and a coffee stand and kettle in the corner. No pot in sight. 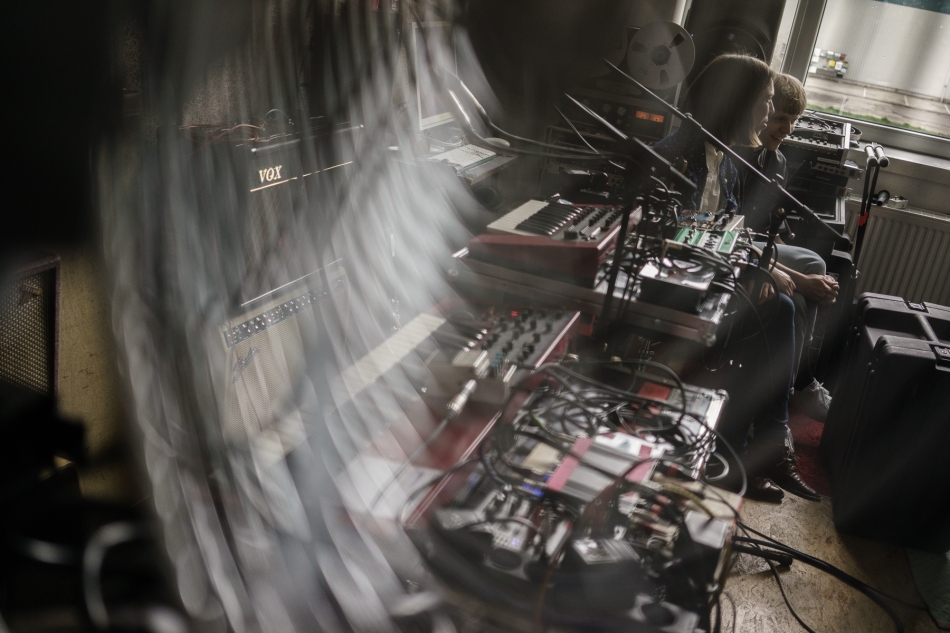 This seems a pretty appropriate set up for the band. They’re focused, concise and at least appear to be pretty clean living. They’re also really, really nice. They sit forward as though they’re slightly nervous, but super eager to tell me all about their band and their new musical direction. Despite being one of Roskilde Rising’s most successful acts last year, and a recent US tour that involved playing SXSW, they are still tangibly humbled by the attention they receive, but they have a clear sense of self belief in their brand of airy dreampop.

Yesterday (12th May) saw the release of their second album, Sudden Anatomy, the follow up to 2013’s The Drowsy Kingdom. Arguably the biggest challenge in an artist’s career, the dreaded sophomore album can make or break you, label you as a one off, or mark you as a band that’s just warming up. But this Danish dreampop trio is young and ambitious, and are moving forward with their musical instincts. “I think we’re all really eager to explore and not stand still in a creative manner,” says Anders. “It really shines through on this new album because we’re experimenting a lot with the concept of Ice Cream Cathedral. The first album really went song by song. We were focused on the melody and a more accessible way of thinking. With the new album we wanted to keep that stuff melodically, but we wanted to do some more with textures and rhythmics. We were kind of experimenting with our own concept. When you do that, naturally you get some kind of reference to yourself. It’s a self referential album.” 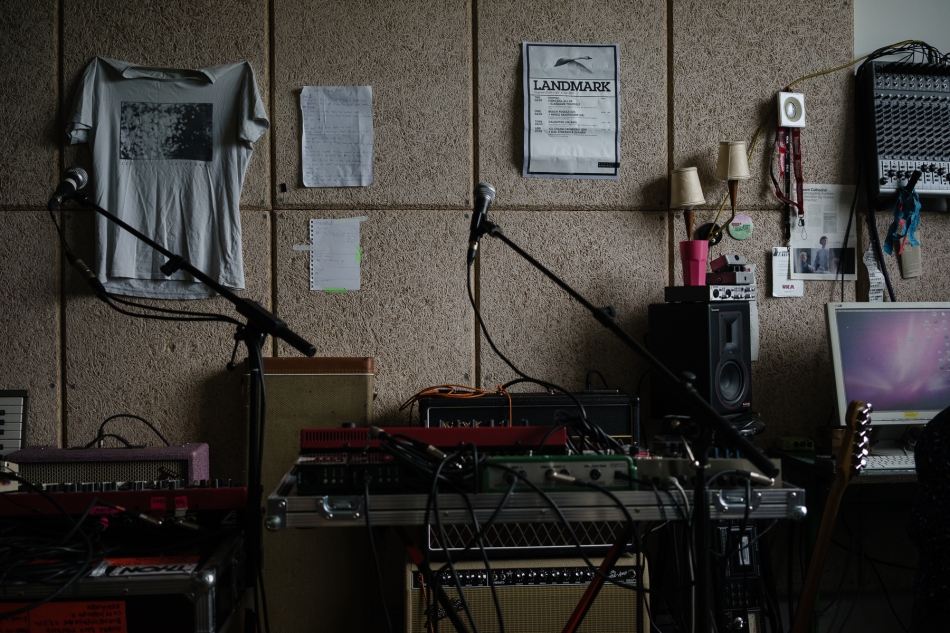 The more I talk to the band, the clearer it becomes that Sudden Anatomy is about reaction to the old form, and has a clear goal of development in mind. Anders is the first to answer when I ask about the beginnings of the new album. “The first album was written like a layer cake and recorded in the same way. It was recorded to a specific grid and template that was pre-determined electronically. The experience of transferring that rigid material made us want to transcend the feeling of the grid and play the songs more like a traditional rock band would do. That triggered the feeling of wanting to transfer back to the compositional phase. That was pretty interesting to experience; from the beginning of our gigs we said we didn’t want to play with pre-recorded stuff playing from a computer. We didn’t want a backtrack. We wanted to play live, even though we have a lot of electronics. Then from playing that way live we realised it was also fun to write that way, to have that much freedom. Even though from gig to gig things would fuck up.” Anja, the band’s vocal lead, adds: “We would’ve been quite doomed if we had used backtrack. It’s only because we didn’t that we had that possibility. It felt strange that the new way we wanted to write in was suddenly up against what we did on the old album. That was pretty hard to get around.”

Kristian, the guitarist/keys, tells me about the first ideas. “We knew that we wanted to do something different to The Drowsy Kingdom, but we didn’t exactly know what to do. We had a serious headache about what to do in the beginning. We just knew that we wanted to be more energetic. We recorded some really funny stuff in the beginning.” Anders chimes in “it really sucked,” to the nods and laughs of the others. 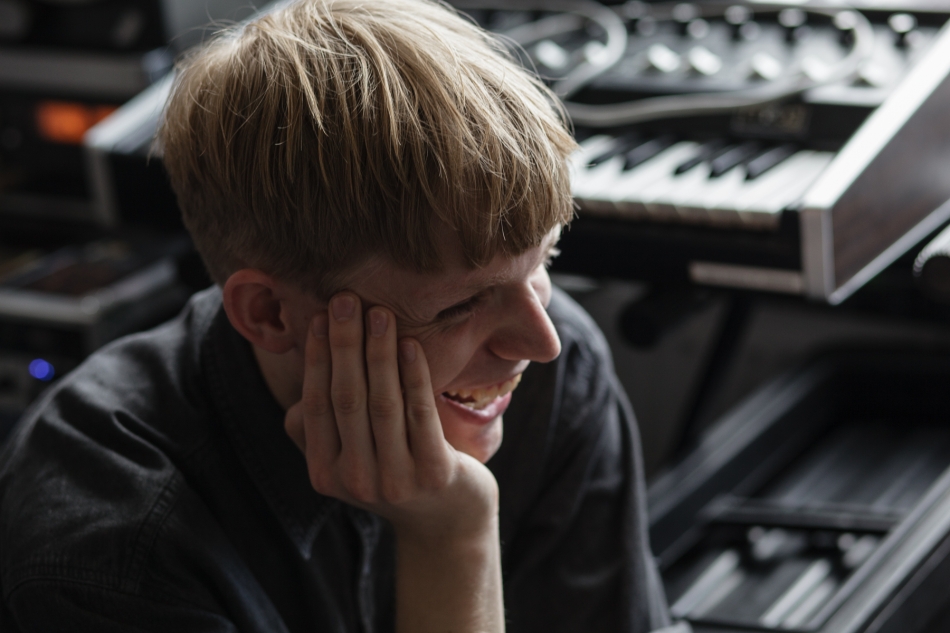 And they haven’t just developed sonically either. Anja is keen to stress the changes to the lyrics that have taken place. “There’s definitely more storytelling on the new album. I’ve been experimenting more on this one; I’ve been reading about historical stuff and really concrete subjects. The last album was more abstract in a way; it had abstract universes… At the time that we started to write for the new album we were still at school in the conservatory, and I took a lot of classes in lyrics writing. I talked to a lot of poets and found inspiration for that kind of songwriting.” Anders says “The new lyrics are more in your face, whereas the old lyrics were more veiled. I don’t know if it’s more political than the old album… there’s definitely more social stuff there.” Anja nods. “Yeah you could say that. A social consciousness.” 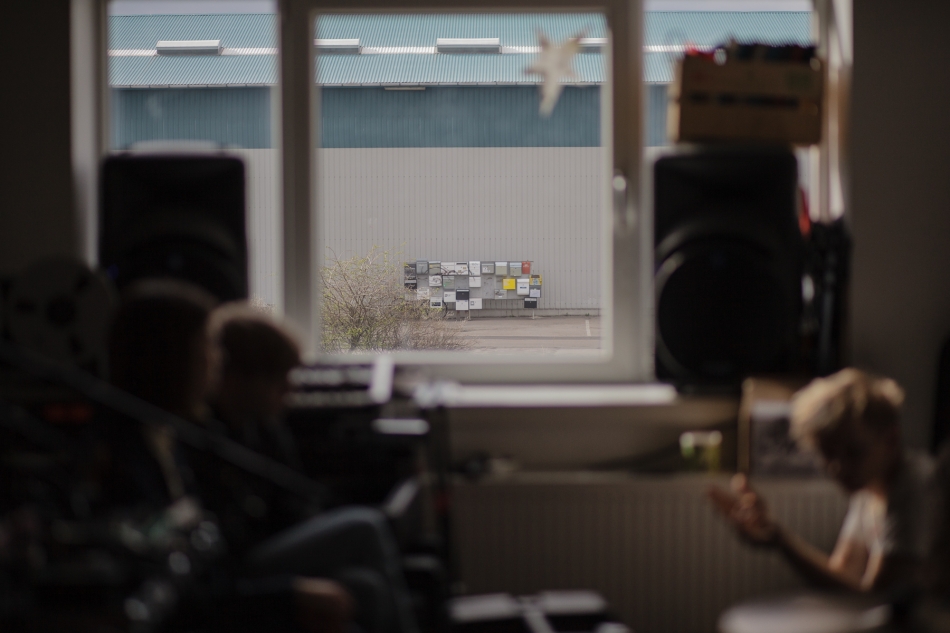 The new album has also seen the band’s first large scale music video release and on screen debut, for the seven minute long debut single, ‘The Swans’. Set on a spaceship, it takes the concept of “space pop” to a tongue-in-cheek level. “I think it’s very related to our old material, where we included a lot of space influences, and the visuals of the old material as well. But Carl [Marott, the Danish director of the video] really wanted to take the idea far out,” says Kristian. The video sees the band play on synthesisers and soundboards rather than a control panel. For Kristian, this made him feel at home: “You really felt in your element with the synthesisers and stuff. We had a whole day in the location with the pictures outside, and that was the main acting part. That was quite funny.”

Anders takes a more critical eye to his acting prospects. “The hardest part about acting for a camera is the facial expressions. For me, I really felt as a first timer in front of the camera that my facial expressions had to include some kind of apathy. You should look like you don’t care. If I had to show any feelings or emotions it would have sucked.” Anja is practical. “It was really cold inside the spaceship, which made the apathy thing really hard.” 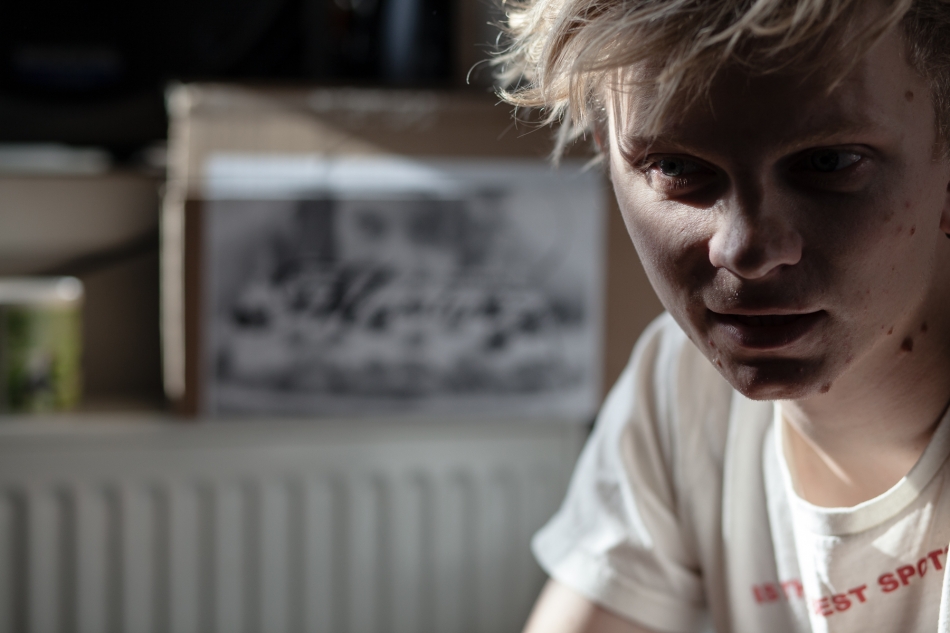 The band are all in agreement when I ask if dreampop has a naturally cinematic quality as a genre. As his bandmates nod, Anders says “it’s in the music. Dreampop tends to be dramatic in a way. If you listen to real dreampop bands like Beach House, it’s really all about the cinematic total music effect. It gets this scored, written down feeling. It has this organic feel like it’s a whole. In a lot of dreampop music, there isn’t one element standing out. It’s more like a sausage of sound.” That has got to be the best dream pop analogy I’ve heard. “I think our music is kind of a mixture; there’s a lot of things standing out sonically, but it has this cinematic feel to it because the vocal plays as big a role as the drums.”

I finish by asking the band whether the genre will be as timeless as rock and roll. The music students are quick to dissect the question to find the answer. Kristian starts. “Maybe it’s not actually a genre in itself. Maybe it is just rock music. I know what you mean, but I think the genre has developed into other things.” Anders turns the question. “It depends how you define timeless, and the definition of how music moves in time. That’s the beauty of music. It’s bounded by time, metrically and sound-wise, so I guess that if timeless is a metre of reference, as in, ‘will people still listen to Ice Cream Cathedral in twenty years’, then I would definitely say yes. Some people will. But if it’s asking whether there will be some kind of revolutionary vibe surrounding dreampop as there is around rockabilly, then I would say no, because it is in itself a hybrid of milestone genres like rock and pop, that have had their moments.” 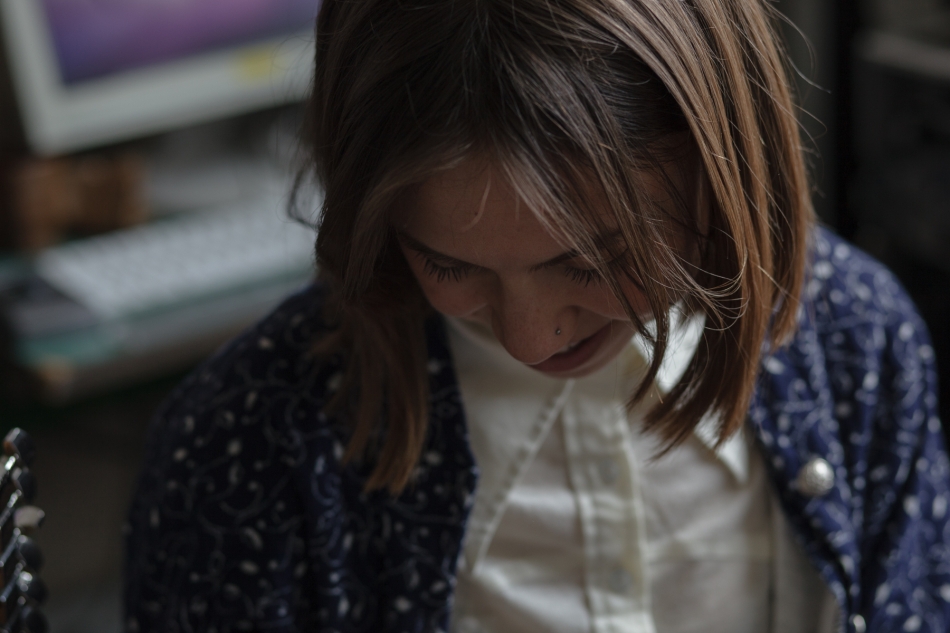 “I remember we said in another interview that the time of idols was over. I remember saying that I really missed Whitney Houston and Michael Jackson; social figures like that. But it’s not the time for that right now, because of the market and the way people regard music. It’s become a thing for every man, because of X Factor etc. It’s become ordinary, and that destroys the glow. That destroys everything that’s special about the people onstage. If I go to a show I don’t want to see someone like myself, or someone I can relate to. I want to see someone who I can look at and think comes from a different planet. That part of music is timeless. I hope some people see that in the stuff we do. I don’t want people to think ‘I can totally relate to the way the drummer moves’. I would really like for people to say ‘I really get inspired by the way he performs’, or the way Anja sings is like nothing else. When Kristian plays guitar it’s like nothing I’ve ever heard before.’ Everything we play is bounded by time, and bounded by tradition. I guess the timelessness develops itself in the moment where you release yourself from the way society regards music today. I think the way society regards music today is destroying music. I really wish that some alien would land on the planet and do some fucked up stuff that people could understand, but not relate to.” 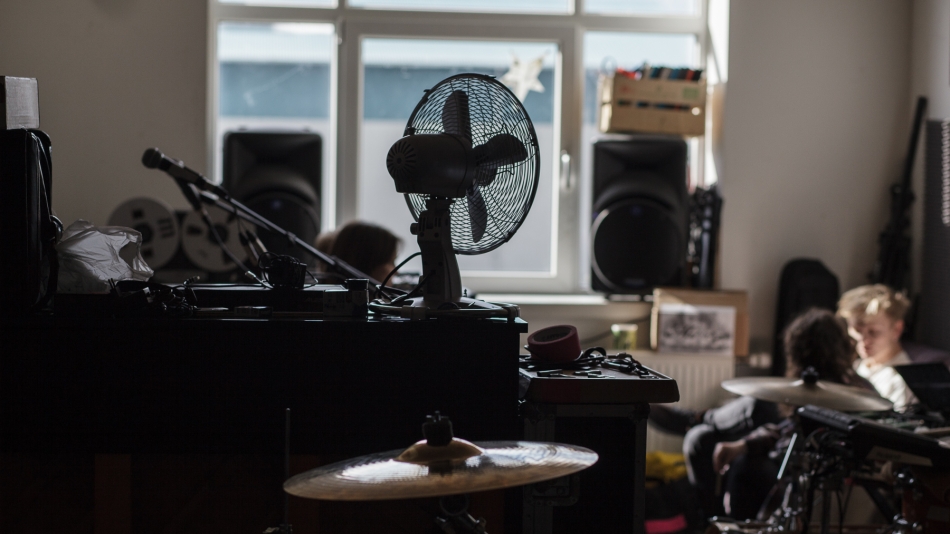 It’s a slightly morbid note on which to end, but Anders makes a convincing argument, even when I ask whether Lady Gaga might be an alien (for the record, in Ice Cream Cathedral’s view at least, she’s not). In this small rehearsal space in industrial Copenhagen, I wonder about music and revolution, and whether the two go hand in hand, as this band so desperately hopes it does, even if now isn’t the best time to prove it. The band seem eager to spread something with their music, to inspire others as they’ve been inspired, and see a wealth of possibility with the power of their performance. They’re smart, driven and positive. Revolution doesn’t need to be taking to the streets or making your controversial lyrics hit the Top 40. Maybe it’s about something smaller; the desire to be inspiring. This band’s got it in heaps.