The creation of Reptile Youth’s second album, Rivers That Run for a Sea That is Gone,  was surprisingly undramatic considering the changes that took place for the band. They decided to leave their record label, Sony, in itself a fraught decision for any band, and decided to partner with Mercedes-Benz instead of another label.

“I think a lot of people who do collaborations with bigger corporate companies feel a little bit insecure about it. It can be a taboo: art and commercial stuff,” says singer Mads Damsgaard Kristiansen. “We decided to leave our record company; that made us have a gap of a lot of money that we needed if we wanted to work with this record in the way that we wanted to work with it. Then we got in contact with Mercedes, who saw some kind of potential in us.” 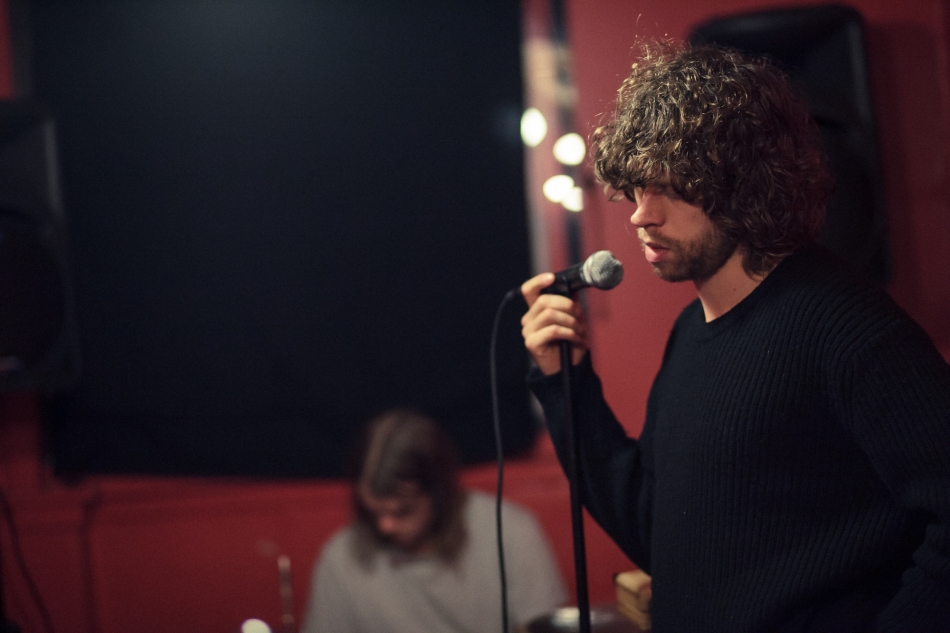 Because Mercedes does not function the way a record label does, Reptile Youth have certain freedoms atypical of a traditional band-label relationship.

“We own all of the rights ourselves. We have the master tapes. We have the rights to do whatever we want to,” says Kristiansen. “If you have a record label, sometimes they’ll be like, “No, we don’t want release that video because it’s too sexual.” or “We don’t want to give away this track to this magazine because we don’t think it’s a good idea,” even though we’re like, “Yeah! Let’s do it!” It’s really nice to have full control about the build up and what you want to do with it.” 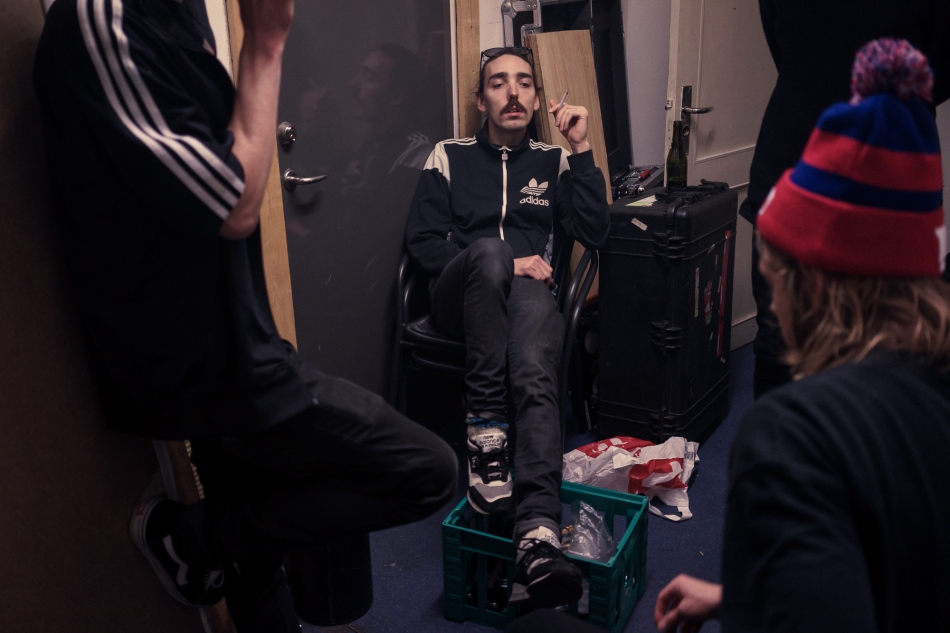 Part of the build up involves Reptile Youth introducing a new, gruffer sound that fans may be familiar with.

“We wanted it to be rougher. We recorded it all on tape, so a vision for the record was to make electronic music played by hand, played on tape, because we liked the sound of something being old but being done in a fresh way with new machines and new ways of thinking about music,” says Kristiansen. “The new record is also darker than the first record. It’s probably not as pop-oriented. Something attracted us to the dark both songwriting-wise, but also standing on a stage, we found out that we really liked to perform those darker songs. We liked the energy there. That felt more natural somehow.” 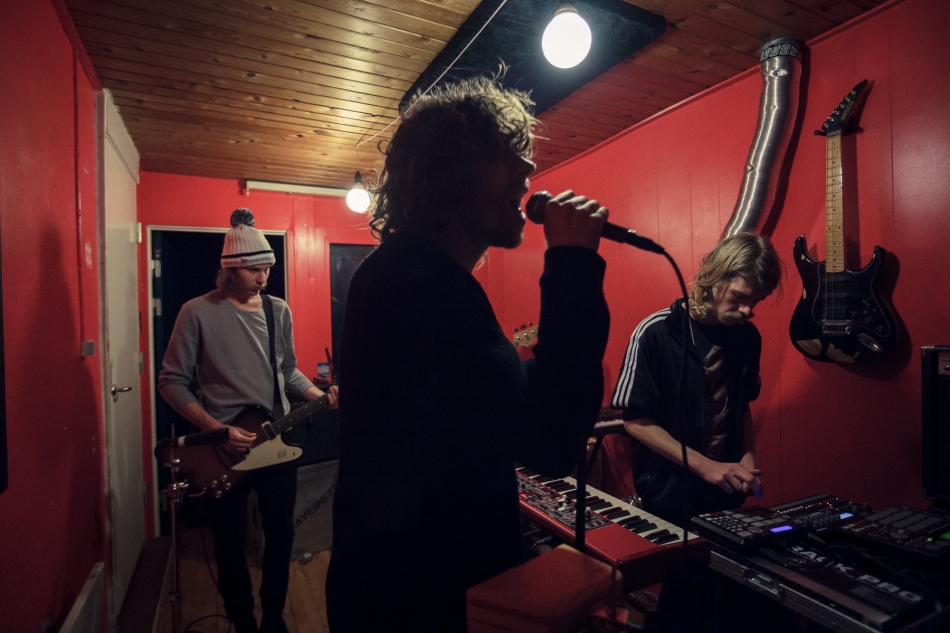 Rivers That Run for a Sea That is Gone also sees Reptile Youth expanding, more or less officially, from its founding duo of Kristiansen and bassist Esben Valløe to include guitarist Mads Berglland, drummer Rasmus Littaur, and synth player and producer Simon Littaur. The new line up quickly produced more work in two years than many bands do across two albums.

“We made 40 full demoes, and we recorded 13,” says Kristiansen. “It was kind of hard to have full demoes that sounded kind of like something that we liked, me and Esben, and then the three others came in and said, ‘This is nice. We want to take this out. We hate this.’  So in that sense it was a challenge to put through that process.

“It was really nice to have fresh eyes on the songs that we did,” he continues. “It was very democratic, maybe border-lining to being too democratic. There were no leaders, really. We hadn’t been in that constellation of creating stuff before.” 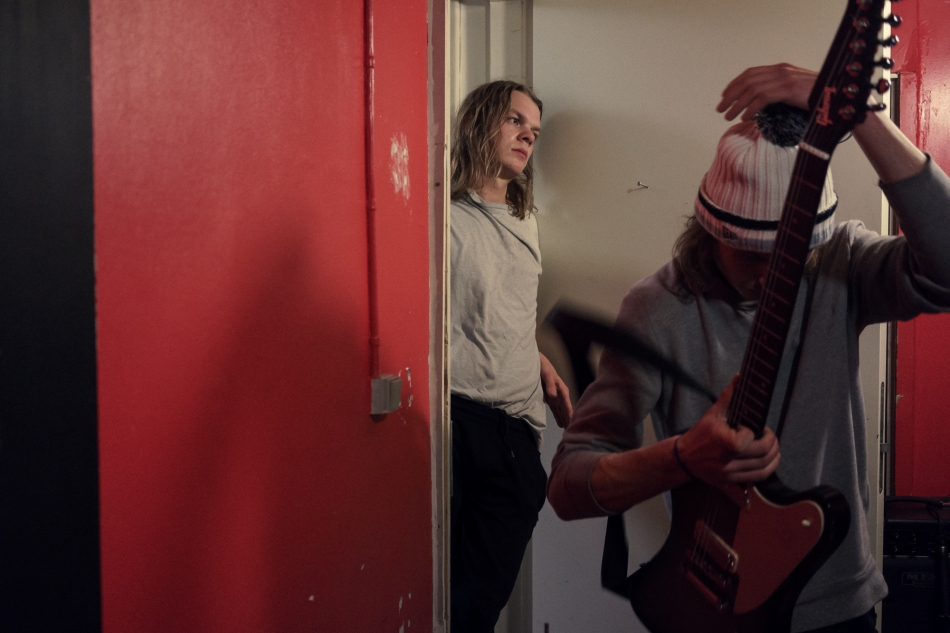 Kristiansen began working on Rivers That Run for a Sea That is Gone immediately after their self-titled debut was finished. The new album came together quickly considering the various changes the band faced.

“I started writing songs just after the first album was recorded, which was half a year before it was released,” he says. “I kind of exploded in songs and wrote 15-20. Then the rest of the 40 just came dropping in while we were on tour or in the period just before we had to go into the studio. It was like, ‘okay, now we have like two months, let’s get everything out.’” 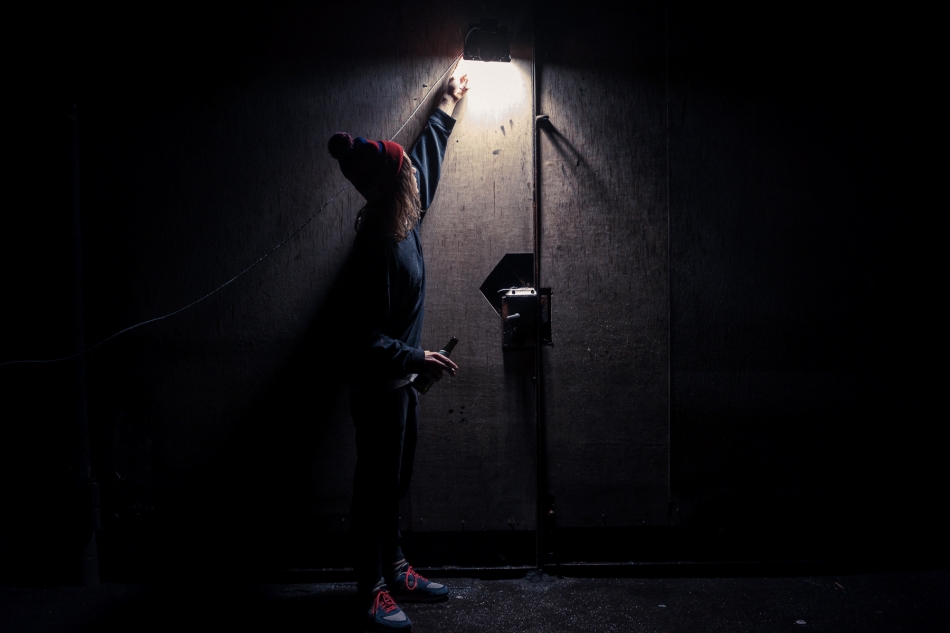 Rivers That Run for a Sea That is Gone was recorded in their soon-to-be former Nørrebro space with Simon Littaur and in Valby, Jens Benz, who is better known for his work with punk bands such as Iceage.

The album was recorded between June and September of last year, Kristiansen says,  “We were touring intensely in the same period, so it was playing festivals Thursday, Friday, Saturday, sleeping all Sunday because we were so tired, and then being in the studio Monday, Tuesday, Wednesday.” 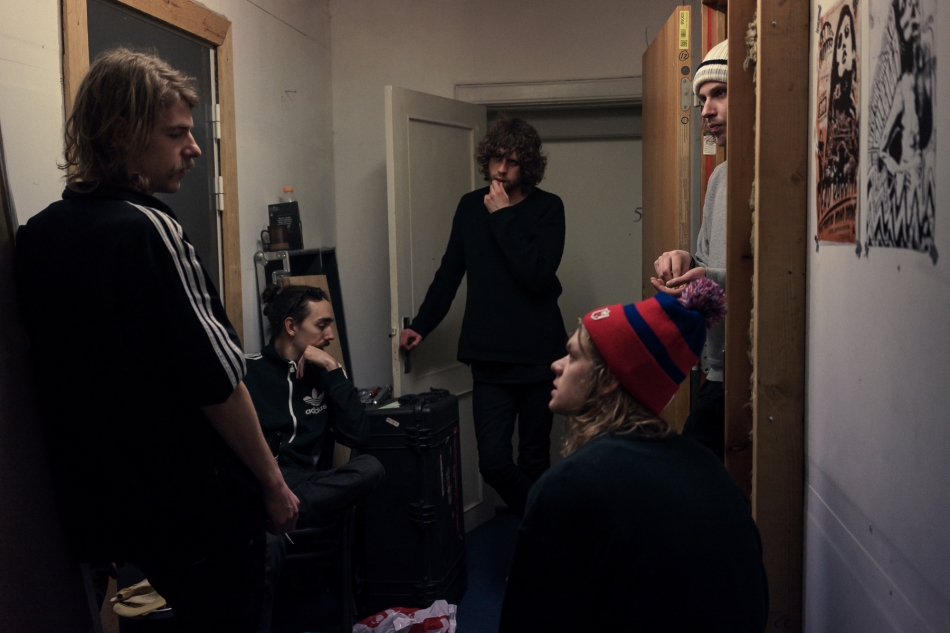 This exhausting schedule had some benefits. “It was very much back and forth. Which was nice, because then we came out and were standing in front of 2,000 people and remembering, okay this is why I sit there and feel like an idiot for 12 hours some days,” says Kristiansen. “If we don’t go forward, but you’re still doing it, and then you come out and, okay, okay, it makes sense now.

“But it was also a little bit stressful,” he continues, “because it was all of us being together 24/7 for four months in intense situations both playing live but also making decisions and agreeing on stuff.” 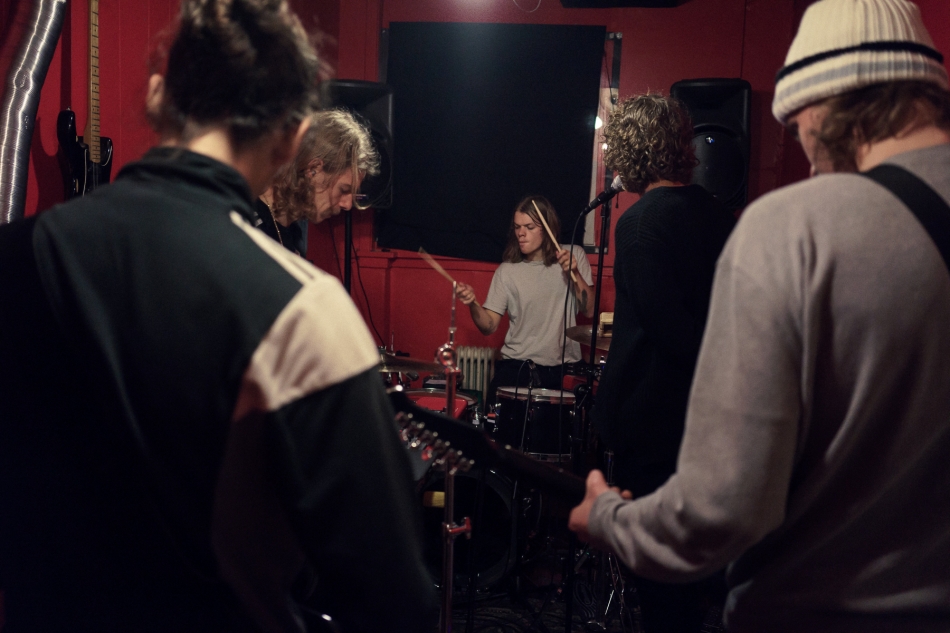 Handing control of the logistics of packaging and distribution over to their manager allowed Reptile Youth to limit their decision making to how the album itself would take shape, in much the same way their deal with Mercedes allows them to focus on the art.

“I think that’s kind of the future of art, commercial brand relationship, is the commercial brand supporting the art in the direction the art wants to go. Because that’s the only real, the only authentic way to connect.” 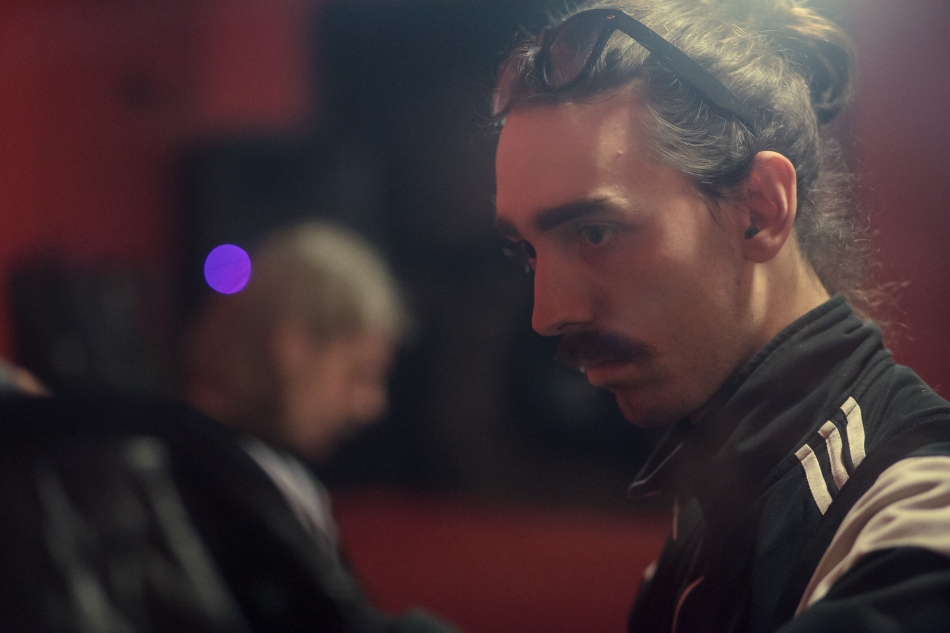 Kristiansen feels very positively about the band’s new arrangement, but he has no illusions about why Mercedes wants to bankroll them.

“I’m aware of the fact that they do it because they want to take some of our brand and put into their brand,” he says. “Of course they’re not just a rich uncle that’s just like, ‘Here’s all this money, do whatever you want to, I don’t want to have anything to do with it.’ Of course there’s a corporate thought behind it. But I think in that sense it’s okay, because it makes me able to work exactly how I want to with my art. Having a record label would also be working with a corporate company. There’s no difference. Sony Music is just as much the devil as Mercedes is in my eyes.”

Rivers That Run for a Sea That is Gone is released worldwide today (March 10th).