Gazelle Twin’s second LP, Unflesh, with its viscerally minimalist approach to electronic music and singular conceptual vision, has received a good amount of critical acclaim over the last few months, allowing the formerly Brighton-based composer Elizabeth Bernholz to tour widely across the US and Europe. This week, on the occasion of her concert at Vega’s Ideal Bar, accompanied by her husband, visual artist and musician Jez Bernholz, we caught up with the pair.

Gazelle Twin and Bernholz, Elizabeth and Jez, have much to teach the world in terms of touring on a budget. The couple manage to carry all their gear (one sampler and one keyboard) in a single suitcase, travelling from gig to gig across Europe by train. I get the impression that, for all its practicality, it is the romanticism of train journeys that fires up Jez. His own brand of electronica pulsates with a passionate earnestness, typified in tracks like “Austerity Boy”, which complements the more sparse and aggressive compositions of his partner.

It is difficult in retrospect to reconcile the energy and terrifying blanked face of the character prowling the stage in a blue hoodie with the soft-spoken and charming woman I interviewed only a couple of hours before the gig. Backed by glitchy and hard drum and bass lines, this embodiment of teenage violence whispers, breathes and chants, half thug, half shaman. The imagery evoked in her words can be clearly guessed by glancing at the titles—“Unflesh”, “Exorcise”, “Anti Body”, “Guts”—eviscerating and tortured, innards and fluids sprayed on a backdrop of cold, artificial sounds. Hidden within that alienation, though, are traces of some kind of reserved humanism. Where “Belly of the Beast” uses the sounds of supermarkets to evoke ideas of parasitic consumption, the haunting “Premonition” reaches towards a more pastoral mode. The human voice, altered or dry, singing or just breathing heavily, stands above all else on the record.

Though many have already pointed towards some fairly obvious influences on Gazelle Twin—The Knife and Björk perhaps mentioned most often—there is clearly something quite unique and personal about Elizabeth Bernholz’s music which merits close listening. So on Wednesday evening, over dinner at a Thai restaurant on Istedgade, I am keen to find out what lurks behind the character and music of Unflesh. 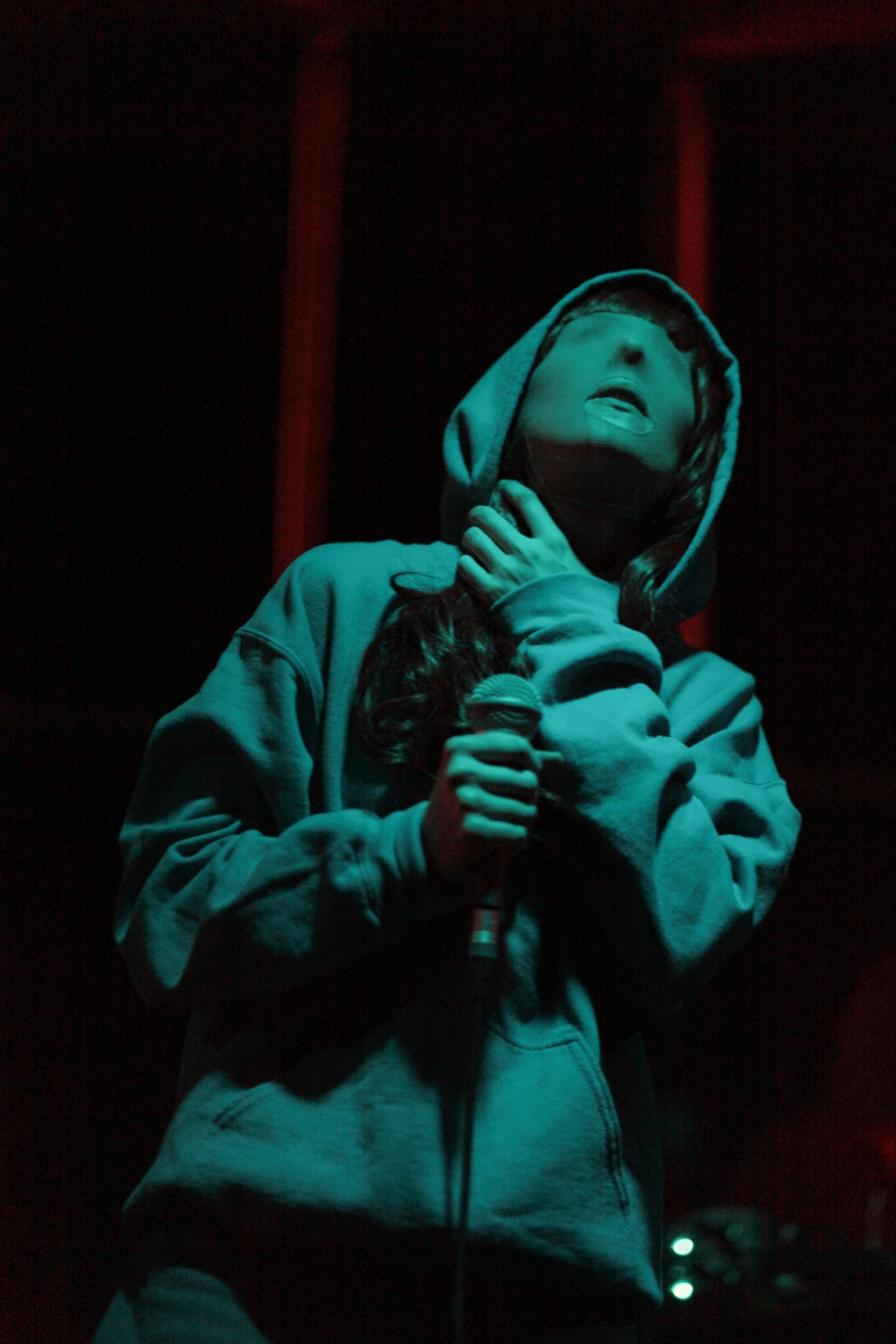 What has it been like to transition from recording to performing this record live?

For this record it has been almost seamless. It’s quite easy to perform live because it’s so minimal, and there was that intention to strip things away, half thinking that I wanted to be able to perform it really dry, with a solid sound, and not to have to rely on any effects.

Was it more difficult with your debut album, The Entire City?

With the previous record, which I didn’t perform that much, it was much more difficult, because I didn’t write it with that intent. It was very sweeping, you needed a visual part to it. I never felt that satisfied performing it.

But now you perform live with Jez, what is that like?

Jez and I are married, and he kindly offered to perform with me. I used to perform with two guys who had their own projects, and it was always very hard to organise that part of it, to get everyone available. But also I’m just very anxious, and performing is quite a lot to get through for someone who is very sensitive, so it’s actually been very helpful having you [turning to Jez] just to have some security. Performing this way allows me to be more aggressive and play a role.

Does your approach to the songs change as your perform them more and more?

I haven’t felt the need to change much in the songs. I think we’ve to go a point now where we’ve done close to fifteen sets in this tour, when we’re starting to think it needs something else, something in the same vein, probably not a new song but a cover. In the past I’ve covered Joy Division, which is a bit audacious. “The Eternal”, which fitted into my older stuff. The most recent one is a Wire cover, “Heartbeat”. Credit goes to Jez for that. I always try to cover stuff that’s as different to me as possible, usually songs by men, rather than female-written ones. Prince is one.

“Premonition” has a very different mood to the rest of the record. Almost pastoral.

It’s just that one melody [sings it]. It has that medieval feel, it’s in lots of music, especially choral music—the bedrock of all my music—and then transitioned into folk music. But it’s not really anywhere else on the record.

Are you ever surprised by your work?

I never thought I’d be doing spoken word—or “rapping”, if you want to call it that. If you’d told me that two years ago I’d have cringed. But I try to do it as naturally as I can.

Is being natural important?

I like artificial sounds. I wanted the elements of this record to be very distinct from one another other: bass, drums, vocal, a background of choral vocals or synthesisers. I didn’t want too much synthesiser on this, or if I did I wanted it to sound like a human voice, and most of them actually are. I like the way I can affect my own voice. There’s an earnestness to the dry, natural voice, but I wanted to get away from that completely.

All the videos and promotional material for this album feature you with a pixellated face and blue hoodie. Where does this character come from?

It just comes from lots of childhood experiences, lots of memories that I unconsciously started to think about in the process of wanting to make music that was really aggressive. It’s all about school, displacement, being a young girl, really. There’s adult anger in there as well, but mainly it’s a teenage expression of anxiety. I just wanted to scream a little bit, which I never did at the time. But it’s not all meant to be deadly serious, there’s a cockiness to it, playful aspects which I hope come across.

Originally I’d wanted it to be a P.E. kit, but that would have been a bit weird, dressed as a child. There’s more room to disguise myself this way, and I’d had a blue thing going through my previous costumes. Blue is a bit of a school colour, a sporty colour.

As for the tights over my face, obviously there is this association with crime, this really masculine image. I always found that hilarious, butch guys with shear tights on their head. But it was just a way to blank my face out. I wanted to look pixellated. And it has this doll-head effect at the same time, so hard and soft.

Is it difficult to perform with that get-up?

There’s so much breathing that sometimes the hair of my wig goes down my throat. Really horrible experience, but I have ways of getting around that.

Do you plan on keeping the character for future projects?

The more I’ve externalised the character, the more I’ve thought “that’s it, there’s nothing more to say.” But I think there are still other routes to take it. My ultimate plan would be to stop touring the album and work the character into a graphic novel, so that the girl is a stand-alone character, existing beyond the music. I’m not sure the music is the fullest expression of that persona. I’d like there to be something that lasts and has a different kind of existence.

So which comes first, character or music?

The character came after I’d written most of the music. The music was just my experiences. It’s hard to remember, really, because so much is visual when I’m writing. I collect a lot of images and film, and sometimes I will just write down words and pick a word I want to write a song about. It always starts with a musical loop, or I’ll pick a word and imagine how it will sound. Or an image might give me a feeling for something to express. It’s a whole jumble, I’m completely all over the place when I’m making stuff. I just gather things, hoard things, just live with them for a while.

It reminds me of the kids I was scared of in middle school.

I wanted to look like one of those Cronenberg kids from The Brood. The P.E. kit was my version of that child. 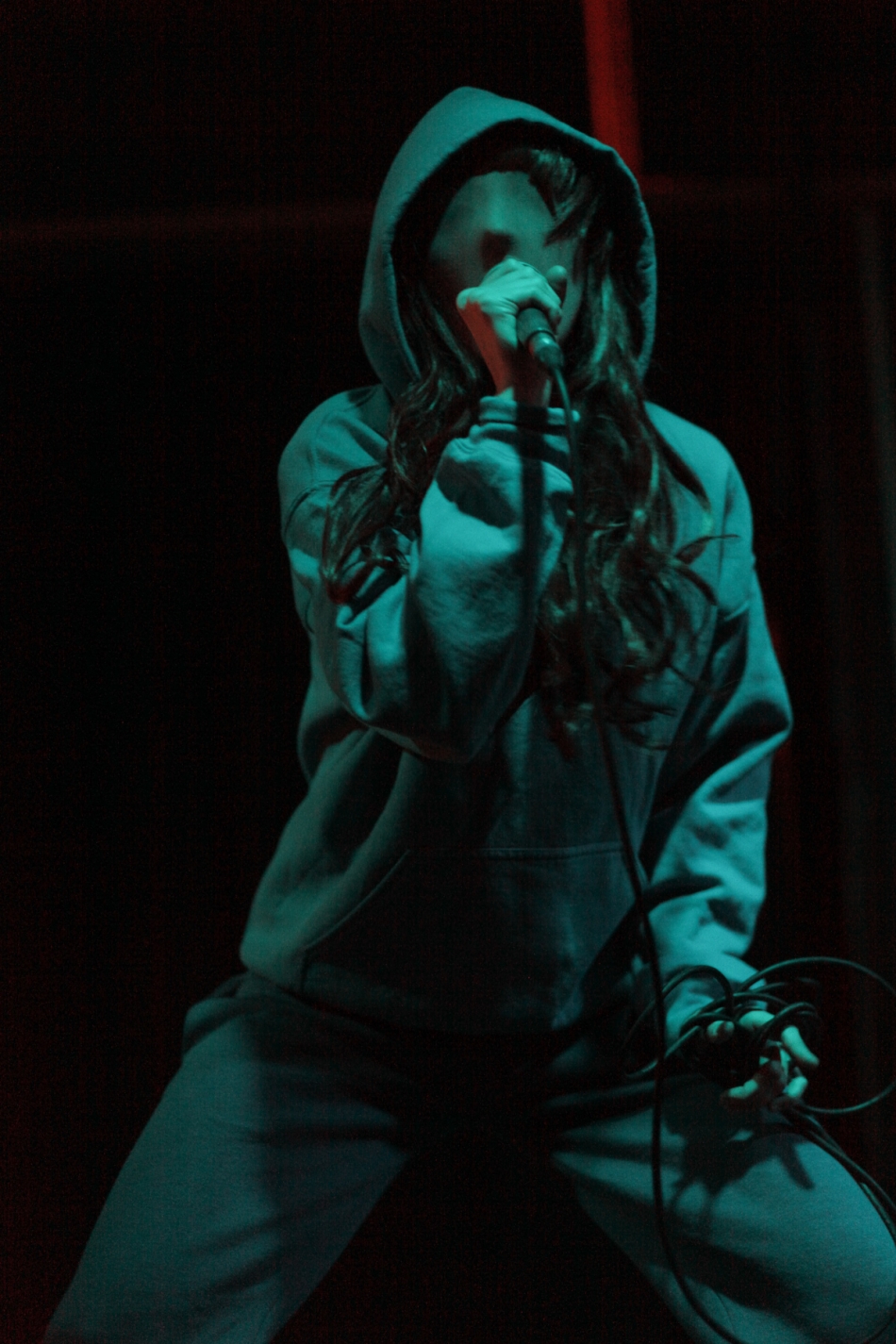