Brooklyn’s A Place to Bury Strangers have built a reputation based on their intense live shows and blistering volume. I’ll vouch for that reputation; this is a band I’ve seen more times than I can count on one hand. I’ve seen them in different venues with differently proportioned stages and different qualities of sound systems. I’ve seen them enough that people ask why I would go see them yet again.

It’s a fair question. When you’ve seen a band play enough, there’s a certain amount of predictability, even if that amounts to expecting something wild to happen. In addition to noise, there’s a fair amount of flailing and some acts of violence against musical instruments to be expected from this band.

In the case of APTBS’s show at Loppen, the unpredictability began innocuously enough, with them opening with “I Lived My Life to Stand in the Shadow of Your Heart,” a song that in previous years would be used to blast the audience apart at the end of their set. If that’s how you’re starting things, how on earth do you follow from there, never mind end them? 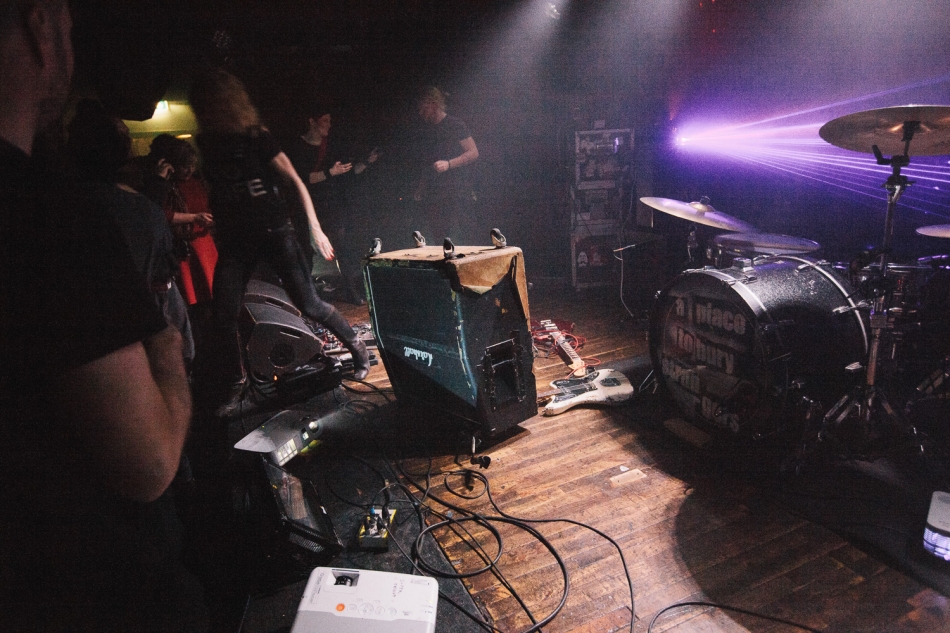 What follows is some fog from the smoke machine, a budget light show stitched together with strobes and projectors by a roadie constantly having to switch and reposition them (it’s impressive for what it is), and yes, plenty of noise. There’s a little instrument swapping, but not so much that it slows the pace of a show representing a good span of the band’s catalogue.

Halfway through the set, the stage grows completely dark. Drummer Robi Gonzalez leaves the stage, then bassist Dion Lunadon, leaving frontman Oliver Ackermann alone, barely visible in the faint light and smoke, producing a sound from his guitar similar to a thunderstorm. It soon transpires that they’ve set up on the floor a few feet away from the stage, surrounding gear that can’t be distinguished in between flashes of a strobe light, which proves dangerous when the neck of Lunation’s bass nearly makes contact with my face. It’s an unexpected diversion from the glimpses of thrashing bodies through strobe lights.

In answer to an earlier question, they end things with as much feedback as possible — Ackermann first setting his mic against an amp and when that doesn’t work throwing his guitar on the stage and flipping the amp over on top of it. Antics were anticipated, and delivered on, but not exactly as expected. And for that reason, I’ll be there the next time they’re in town.

Tags: A Place To Bury StrangersfeaturedLoppen