A Sunday night in Huset, remarkably sold-out, is a slightly surreal affair. The weight of the upcoming week, added to severe lack of sleep and some very cheap ear plugs, give the effect of viewing a gig through a fishbowl. This might not be the best set of circumstances, but they find their match in the acoustic psychedelia of Amen Dunes. Damon McMahon’s “anti-love songs” work well as anti-lullabies from the Land of Reverb, aided by a drummer and ambient guitarist/keyboard player.

Love, Amen Dune’s latest release, is a little sweeter and more lush than the noisy negativity of Through Donkey Jaw, but Damon’s onstage presence shows that dark irony lingering just behind the surface of his otherwise laid-back attitude. He does the very singer-songwriter-y thing of introducing several songs, but these are welcome forays into his approach to his music, rather than indulgent ramblings. This evening he reveals the origin of “Ethio Song”, claiming it to be a cover of a piece of unknown Ethiopian music coming through the walls from his neighbour’s apartment. Tonight’s version of the song sounds very un-Ethiopian, with none of the trebly guitar lines from the record, but this is but one instance of a general impression: Love, more than previous efforts, is the closest thing to what Amen Dunes sound like in the flesh. 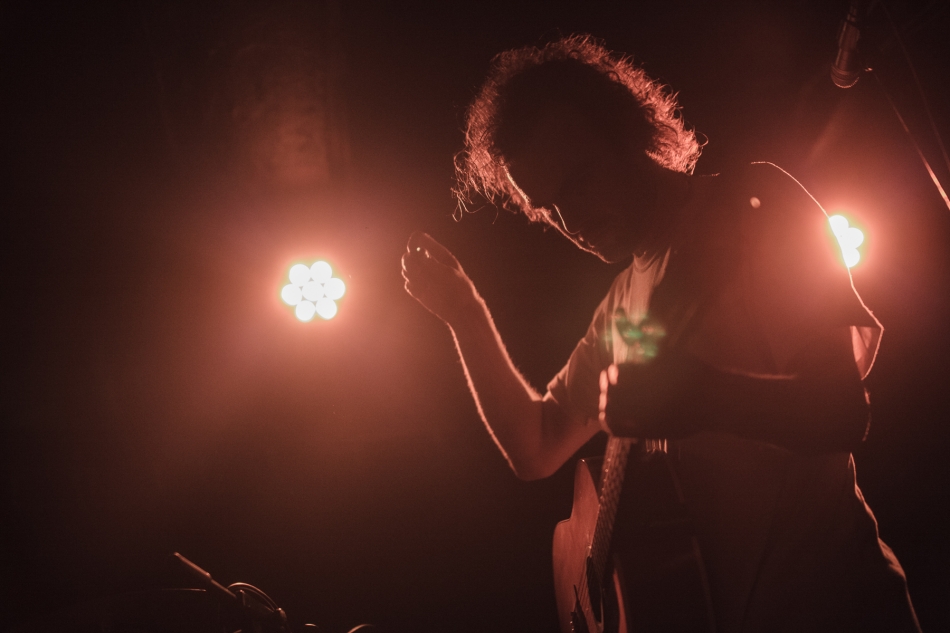 Standing right in front of Damon allows the audience to the clean acoustic sound of the guitar behind all the effects, adding some meat to the live sound. The vocals are incredibly high in the mix, cutting through everything else with ease, as if to confirm that Damon’s freak-folk tinged vibrato is the sine qua non around which everything else revolves. There are, of course, exceptions: “Rocket Flair”‘s picking style and low-key, driving drums, is the closest Amen Dunes get to 60s psychedelia as most would recognize it.

Throughout the evening, it is revealing to observe Damon McMahon offstage. Is commitment to music, not just his own, is clear in the intent look on his face as he quibbles with the sound engineer during the opening act, Xander Duell (ah yes, nepotism’s black tentacles reach far into the music industry). He nods along to the second act, Hand of Dust, and leaps to the merch booth the second the Amen Dunes set ends. It’s been a long evening, but a musician’s job never stops. Fortunately, that is not the case for a music reviewer.