Once known for drilling holes through the floors of venues with their power tools/instruments, it is at first an odd notion to encounter Einstürzende Neubauten in the wood-panelled pomp of DR’s Koncerthuset. Yet the acoustical properties boasted by the venue, as well as the circular seating plan, make it the perfect place to experience the performance of a piece as singular and theatrical as Lament.

During the first year of the centenary of the First World War we all witnessed various attempts to commemorate events that remain baffling despite their continued influence throughout history. Last year saw two Flemish towns commission ambitious musical pieces from left-field bands. The In Flanders Fields Museum in Ypres sought Tindersticks to create a brooding string piece pockmarked with dolorous bells. With Ypres the band evoked the huge, blank austerity of memory, a musical equivalent to architectural pieces like the Cenotaph in London. The town of Diksmuide, on the other hand, decided upon a very different course, opting for these German industrial heroes, Neubauten (it bares reminding that their name translates to “Collapsing New Buildings”, though perhaps on this occasion Old Buildings might be more appropriate).

The resulting performance piece, which was then recorded as an album, draws heavily both on historical research and the band’s own musical influences in the 20th century avant-garde. The stage of Koncerthuset is dominated by large sheets of metal, piping and chains. A barbed-wire harp lurks in the back. Backstage are instruments made out of empty artillery shells and period crutches. The orchestra is penned in the middle of the stage, as if to say: “there is a space for conventional pathos, but only when confronted with something more alien.”

The opening piece, “Kriegsmaschinerie”, lives up to its title, a drawn out wail of metal scraping against metal, chains falling and drills boring into sheets of steel. Frontman Blixa Bargeld stands in the centre, conveying his lyrics not in song but with the means of large placards: “War does not break out. It waits/For a singular but thousandfold:/Hurrah.” This is at once the absolute essence of Neubauten, the punk musique concrète they are famous for, but also a clear reference to one of the defining artistic movements during that war, Futurism. The ad-hoc instruments evoke Luigi Russolo’s “Intonarumori” sonic sculptures, whereas the placards evoke the tone, if not exactly the content, of the belligerent poems of F.T. Marinetti. But even with eyes closed the cacophony is startling, dramatic, strangely pleasurable. The apex of metal screeching, accompanied by the rising wails of strings, is less oppressive than invigorating, a reminder that to some war embodied the possibility of sublime aesthetic overload (they would, to paraphrase Ezra Pound, learn later).

As a whole Lament succeeds as a piece that uses the First World War not only for its subject but for its materials. Its methods are those of Dada, Futurism, artistic currents born precisely in those years. The second piece, “Hymnen” exemplifies this: the melody is that of the British Anthem, which, it turns out, was the same used for the anthem of the German Empire, “Heil dir im Siegerkranz”, while the text is a mashup of the two anthems, interspersed with satirical lyrics by Heinrich Hoffman. One often hears in documentaries about how before WWI Britain and Germany thought of themselves as similar, but here this becomes immediately, absurdly, apparent.

In spite of such bleak subject matter, there is a subversive humour to Neubaten’s work that manages to appeal both to the senses and intellect of its audience. “The Willy – Nicky Telegrams” sees bassist Alex Hacke impersonate Tzar Nicholas of Russia, with Bargeld playing the part of Kaiser Wilhelm, singing (with autotune) the telegrams between the two cousin-monarchs. The autotune lends a further ridiculousness to their nicknames for one another, a sense of farce that two such people should be in charge of nations, and a note of insincerity in their professions of affection. Announcing the beginning of “Der 1.Weltkrieg (Percussion Version)”, Bargeld explains that every beat in the piece represents one day of the war. A hushed silence of anticipation is then broken when he remarks “You should be thankful we didn’t write this about the 30 Years’ War.” It’s a funny aside, but it also reveals the depth to which Bargeld and his bandmates have steeped themselves in research, to remind us that although the conflict of 1914-18 might have been the first of the World Wars, it was just one of many enormous European wars. 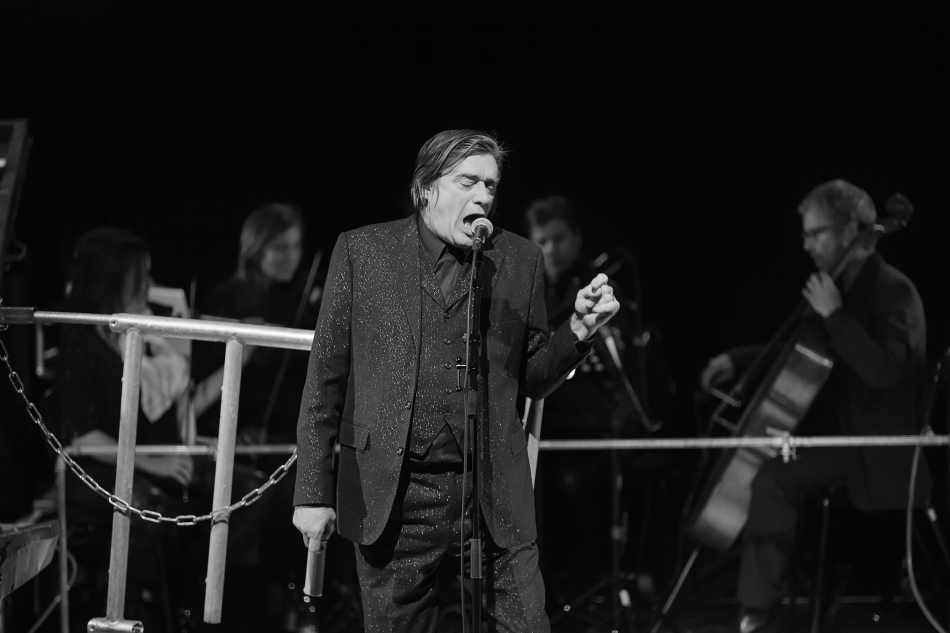 In the introduction to his unparalleled prose-poem on the First World War, In Parenthesis, David Jones speaks of his work as an attempt to “make a shape in words, using as data the complex of sights, sounds, fears, hopes, apprehensions, smells, things exterior and interior, the landscape and paraphernalia of that singular time and of those particular men.” That text itself is a collage of the trench songs, jokes, army drills and ancient Welsh epics, that manage to capture the pity, absurdity, boredom and even the strange and terrible beauty of the experience of war. “At no other time,” Jones claims, “did one so much live with a consciousness of the past, both superficially and more subtly.”

Neubauten do not presume to adopt the point of view of experience, but they do employ many of the techniques and concerns of a writer like Jones, one of the very few British Modernists to have taken active part in the war. In an effort to convey the diversity of the belligerents, Lament’s texts are in German, English, Flemish (“In de Loopgraf”), and though their music might evoke the real sounds of war, their perspective is one of detachment, looking at WWI in the context of past and future events. A piece like “Der 1.Weltkrieg” illustrates how distance can evoke a different kind of pathos, making us experience the time-scale of the war, as a endless list of painful days, whereas the cover of “Sag mir wo die Blumen sind”, the German version of Pete Seeger’s “Where Have All the Flowers Gone”, references both the symbol of the soldier as flower and the continuum between First and Second World Wars in the figure of Marlene Dietrich. 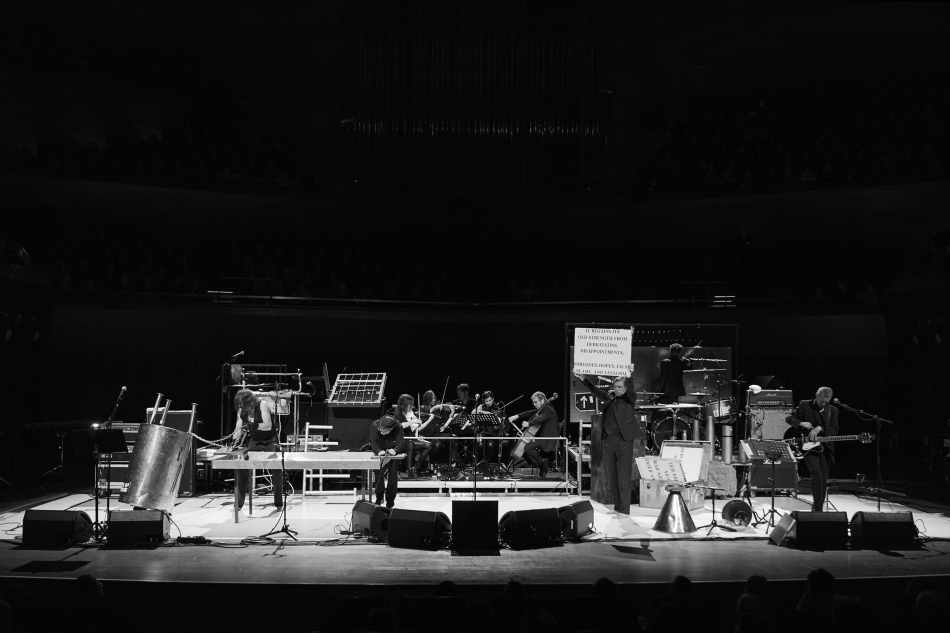 The most interesting covers, however, are to be found in the middle and end of Lament. “On Patrol in No Man’s Land” and “All of No Man’s Land Is Ours” by the The Harlem Hellfighters—a black US regiment forced to serve under the French because of racial segregation—are perfectly chosen examples of some of the great ironies and oddities of the First World War. Originally written and performed by the soldiers whose deeds they catalogue, the humour of these songs is both biting and a testament to their incomprehensible strength. The tracks are stripped back, with none of the swing of the originals, and replace the chanted booms and bangs with actual ones. Bassist Hacke sings the first with a bravado that gives a good sense of the original, whereas Bargeld’s performance of the second lends a sad irony to the words “at last I’m home”, conveying the relief of escaping the war interspersed with the sadness of returning to segregation.

The evening ends with a couple of recent Neubauten songs, the haunting “Ich Gehe Jeztz” and the bombastic “Let’s Do It A Dada”. The latter, with its references to Dada and the apocryphal story of the chess game in Zurich between Lenin and the poet Tristran Tzara, stands as proof that despite Bargeld’s protestations of not having thought about the First World War before composing Lament, the war has always been a part of the band, if only in the figures of the artists that survived and reacted to it.