If there is one predictable thing about Genesis Breyer P-Orridge, it is the crowd s/he attracts: the goths, punks, noise connoisseurs, art musos, drag queens, crusties and techno-obsessives. Each one these stands for a moment in the career that transmuted little Neil Megson into the Pandrogyne h/erself. And although some of the elements of tonight borrow from the past, most notably Psychic TV’s “This is the Final War”, it is not to the industrial of Throbbing Gristle that we look to, nor Psychic TV’s mix of psychedelia and acid house, but to capital-N Noise.

With one of the genre’s masters, Aaron Dilloway, on stage with Genesis, and local Puce Mary giving providing the initial pummelling, this is not a night for just smugly basking among a hip underground. In the first minutes of the opening act, no sooner have I perfected my “arms folded, head tilted, thoughtfully appreciating abstract music” pose that the monitor begins to emit a frequency that makes the lighting rig tremble and my stomach tie itself into a Windsor knot. 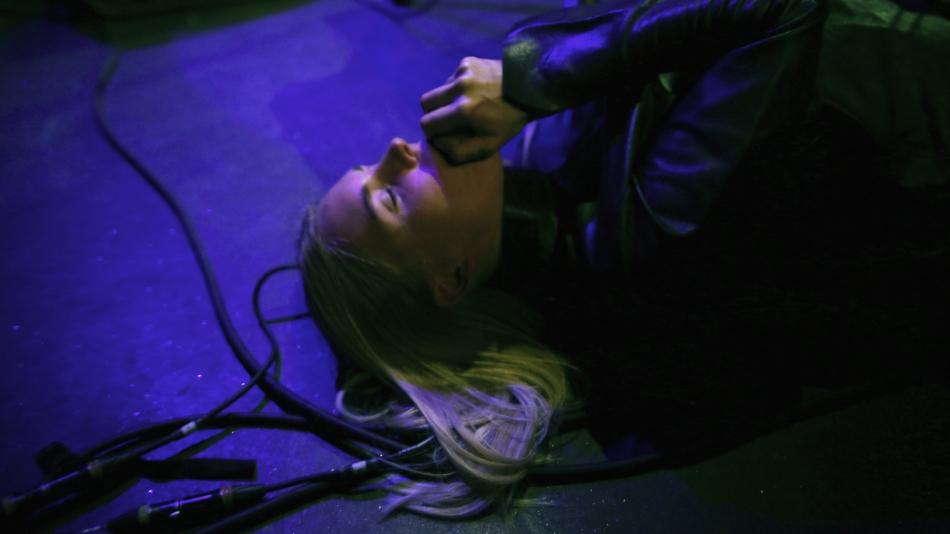 Genesis and Aaron Dilloway switch the direct savagery of Puce Mary for a more diversified approach: Genesis providing the spoken–or, more precisely, incantatory–word, Dilloway the uncanny sonic abstractions, and a screen doings its best to out-freak the other two.

Two people sat down at tables with some equipment doesn’t sound very visually exciting, but between Genesis’s wizard staff and golden trainers, a screen full of dayglo skulls melting into Psychick crosses, and, all the way to the right, Aaron Dilloway convulsion at his desk with what appear to be contact mics shoved into his mouth, there is arguably too much to look at.

Although Genesis P-Orridge’s sometimes lilting, sometimes declamatory voice is the anchor that propels the evening forward, it is Dilloway that really steals the show. Compared to some, his setup is minimal, little more than a few tape loops, a drum and some microphones, but out of these he is able to conjure what sound like rough field recordings in Soviet-occupied Dantean hell. Or something like that.