It’s fair to say that Julia Holter has become something of a contemporary cult figure for the Here Today staff. In fact, checking the side bar on Spotify, I can see that at the moment of writing at least three friends are listening to her. But what is it that hooks us? From the insular minimalism of Ekstasis, via the disquieting swirls of Loud City Song, and finally to the harpsichord-dominated psych-pop of her latest album, Have You In My Wilderness, the L.A. singer-songwriter is hard to pin down to anything other than her voracious and sparkling personality.*

If you have only accessed Holter through her records, her live presence will come as a surprise. No mystery, no ominous lighting, just a cheery young woman with a mass of thick hair and a laid-back band. For this tour Holter is joined by a bassist, a violist and a wise-cracking drummer. The use of strings lends quite a different effect from last time I saw her, when she was accompanied by a small but brash brass section (making the song “Horns Surrounding Me” almost literal). Which is not to say that the set is all airy-fairy sweetness, but rather that this evening discord is sown slowly and suggestively, rather than forcefully. 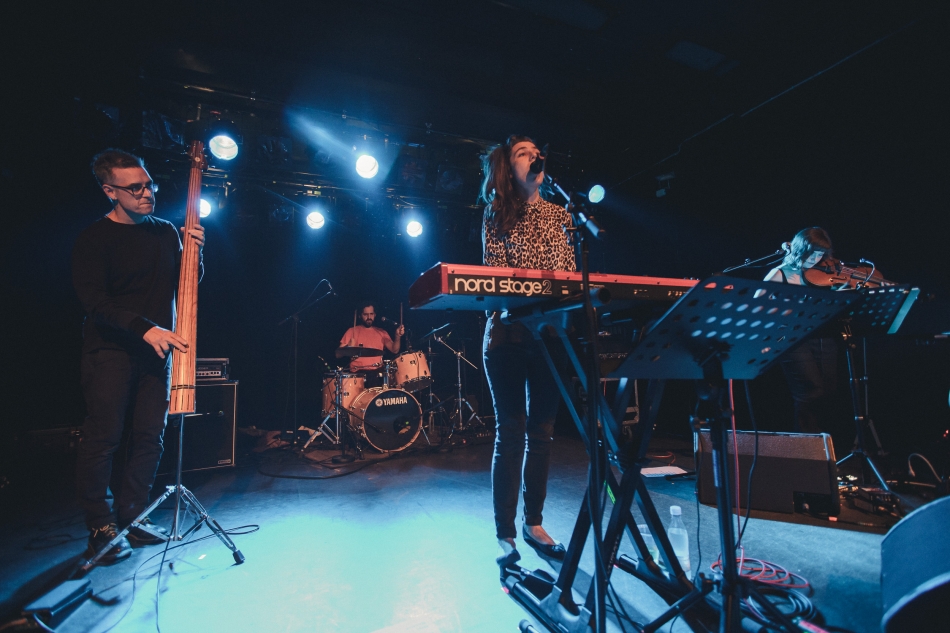 After some initial technical difficulty, the band begins with a song “about dying on an island,” as Holter herself puts it. The song in question, “Lucette Stranded on the Island”, is full of quiet, lush melancholy, showcasing the band at their sweetest. No matter how dark the subject matter might be, Have You In My Wilderness is without a doubt the brightest of Holter’s work, epitomized by the bobbing bass line and drums of “Feel You” (which, we are reminded, does not sound completely unlike the word “failure”).

There are other moments of brilliant dynamism, particularly on the song “Horns Surrounding Me”. Though the horns in question are nowhere to be found, the ominous, driving piano riff does a good enough job of evoking the paranoid desire to run away. As the drums pick up on the alternate beat to the piano, the pace seems to increase, and the viola starts to wail. But the real highlight of the evening is “Marienbad”, with its haunting opening arpeggio and medieval-sounding vocal harmonies. There is an escapist element to all Holter’s music, albeit an escape into something disquieting, but the minimalism of this song seems to highlight the space in the room. Have we escaped back into the present?

*Yes, I am aware that she has released records prior to Ekstasis