There was a question looming of how Julianna Barwick’s atmospheric music would translate as a live performance. Her ethereal voice, largely wordless lyrics, and airy songs are so unobtrusive that it never seemed likely that Barwick would overwhelm a room with the force of her personality. And standing behind her keyboard, reaching across to twist knobs on her sampler and occasionally swaying behind her microphone, this is the case. Her accompanist for most of her set, guitarist Scott Bell, is equally benign.

It is interesting to watch Barwick build a track, looping layer upon layer of her own voice, and how effective her sporadic piano playing is. What is evident is her overwhelming vocal control, and the strength and clarity of her voice, which is necessary for her loops to work at all. But the fascination wears off before too long. 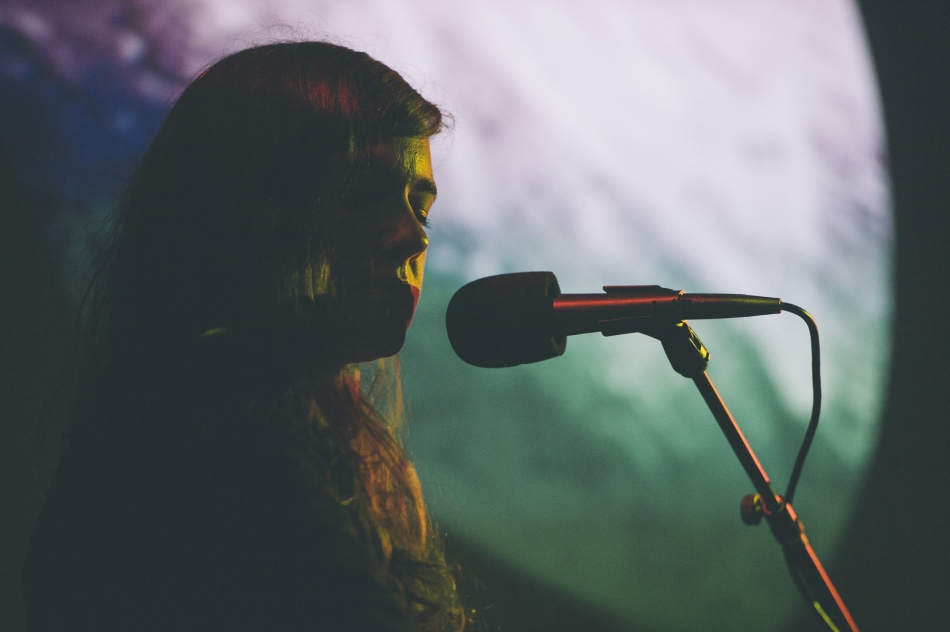 It is not unreasonable to believe that her voice is compelling enough to make her live show worth seeing, in spite of her physically stagnant performance. What is achieved is a sort zen-like state, conducive to meditation — or truthfully, were the chairs more comfortable, to sleep. It’s very peaceful and very pretty, but there is a limit to how engaging it can be.

With this in mind, Barwick has video rolling on a screen behind her. The images — of a seagull, of waves crashing, of a woman (possibly Barwick herself) clad in a lace dress, floating in water, tangled up in tulle — though intriguing, are incidental. The footage keeps rolling even between songs, and begins to repeat itself three quarters of the way through her set.

Her set is brief, coming in under an hour, including the encore. But it’s sufficient. If you missed it, you’ll likely get just as much pleasure out of buying a copy of her latest album, and curling up at home with it, a cup of tea, and a good book.

With all the whispers that Shabazz Palaces were something akin to hip-hop meets
No one expected a flashy set from Julie Byrne. It was anticipated from
The Black Heart Procession broke a three-year silence to mount a modest European