“This is the wildest thing! We haven’t even got an album out and still you are here”. MØ is excited. She is half way through a sold out concert at Store Vega, a legendary venue that holds around 1500 people; she has been crowd surfing; her band is fantastic; she and her band has played 120 twenty shows in 20 countries this year and still Brazil is waiting. Her excitement is easy to understand.

Last time I saw Karen Marie Ørsted was a couple of years back when she played at Loppen with Mor – the elecro-punk duo she and her friend, Josefine, started as teenagers in 2007. I don’t remember that night as crowded.

Now she is close to the hottest thing Danish.

The first sign that told me that MØ could meet the expectations of the audience, was when I saw three horns, a trumpet, a trombone and a saxophone, lurking around on stage prior to the concert. Another early sign was when I recognized the drummer (Rasmus Littauer), who I had the chance to experience and who really impressed me with his precise and raw drumming, when we recorded our sessions with Reptile Youth and Broke. 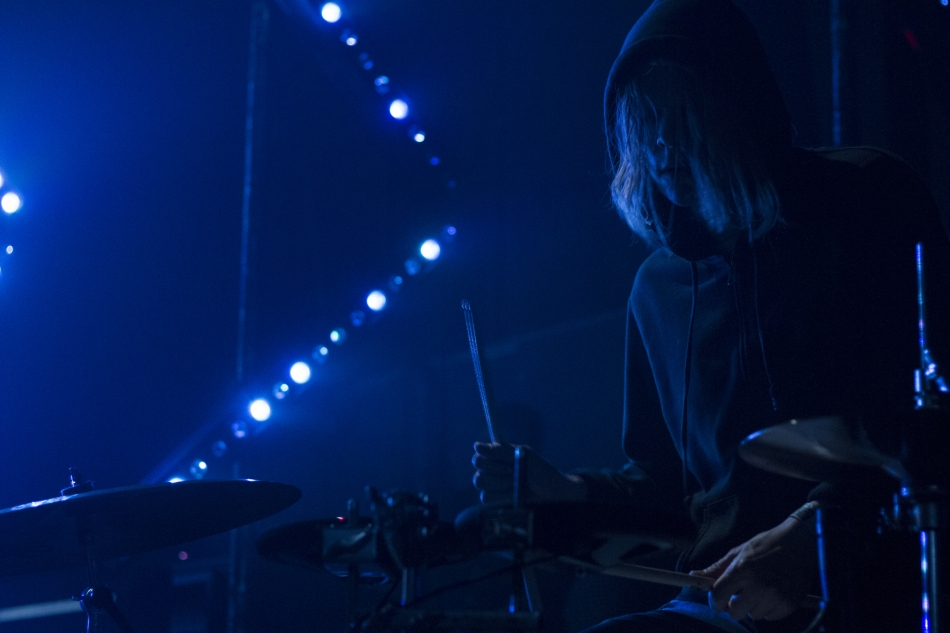 The band was apart from the above mentioned put together of synths (and more) and guitar, but they were dark figures while a follow spot kept MØ in focus all through the concert. Her appearance was energetic and raw – her rise towards stardom did not seem to have tamed her in any way. The performance felt both confident and honest.

As a backdrop there was some really impressive visuals projected on a canvas spanning the whole height of the scene. It was in large part a mix of landscapes, archival footage and triptychs of MØ performing the backup vocals to her songs. Everything was kept in a rough black and white aestethic at times reminding me of the one pioneered by photographers as Daido Moriyama from Japan. The interplay between and the visuals and the live performance worked really well.

MØ played a full set and considering the fact that there is no album out yet, that is quite extraordinary; it basically meant that even the most die-hard fans probably only knew five or six songs. The concert could then be seen as a dress rehearsal – a promising one indeed.