Four months ago, The National sold out Loppen. Capacity: 400. This evening, they sold out Forum, reputedly their biggest venue to date. According to the website, Forum can hold 8500 people. Though this is obviously a considerable milestone for the band, something is lost in a venue this size. Despite the name, the National, even in their most grandiose moments, have always channelled their power with intense intimacy.

Openers This Is the Kit are the first victims to the room. The volume is too low, and the band has to fight against the chatter from the back with nothing more than banjo, bass and guitar. This doesn’t seem to faze lead singer Kate Stables at all, as her voice slowly starts to fill the place with impressive power and delicacy. “Earthquake” in particular has a great groove that thumbs its nose at the stupidly big venue.

The introduction to the National is a giant projection, a live-stream of the band hanging out in the dressing room, before casually strolling towards the stage. I’m not sure if this is cleverly self-deprecating or insulting the audience, who impatiently look on as lead singer Matt Berninger checks his phone. 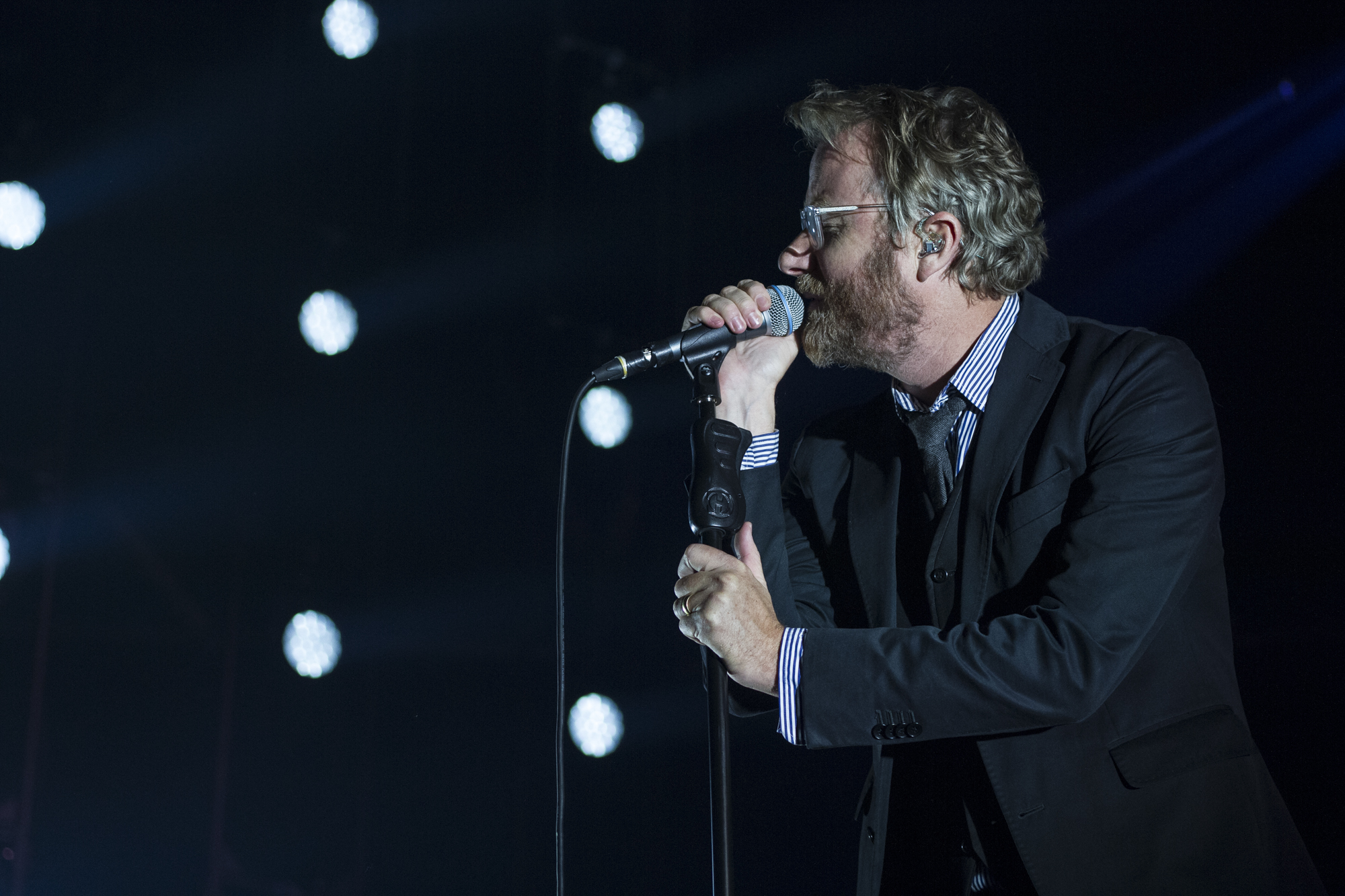 This is a gig of two distinct parts. The first half left me cold, partly because I am not a fan of their latest album, Trouble Will Find Me, but certainly also due to the weirdness, which the band openly acknowledge, of playing in Forum. Opener “I Should Live in Salt” has people singing along, but it feels diluted, like another band trying to write a National song. But the evening picks up rapidly as they move on to material from Boxer and High Violet, and as Berninger downs more and more wine. Everything centres on him, and it becomes apparent that he has decided on a way to counteract the lack of intimacy, and it involves broken screaming and liberal misuse of liquids.

I’ve been waiting most of the evening to hear “England”. It is probably the most suited to the surroundings, a heavy burden of a song, which takes flight thanks to a small brass section. A string quartet lurks in the back, inaudible, for which I am thankful. Towards the end Berninger, still singing, takes a walk among the crowd, followed by a cameraman and some guy from security awkwardly trying to drag the seemingly endless mic cable. You have to hand it to Matt, for all his moody walking to and fro on stage, he understands how to overcome any barriers with his audience.

As the band closes with an acoustic rendition of “Vanderlyle Crybaby Geeks” (“This is probably the largest venue we’ve ever tried this at”), the strangeness of the concert is at its most apparent, but so is its ultimate success. The National are a good band. One slightly boring album and one huge venue won’t change that.

Tags: The Nationalthis is the kit

With the disappearance of Trailer Park and Vanguard, Copenhagen has been missing a
It has been a busy year for Here Today. During 2014 our photographers and
Photos from Northside Festival 2014 by Morten Aagaard Krogh (including Arcade Fire, Pixies,