If what you want is high energy rock music, it’s hard to do better than Courtney Barnett. Her blues-driven slacker rock with big choruses is perfect for jumping around and wailing along. You could take ready cue from her bassist, who spends much of the set flinging his body from side to side like Muppets are made to when they’re dancing. Add to the to that the background projects of weird but amusing cartoons and there’s the feeling of a subversive kids’ show for adults. 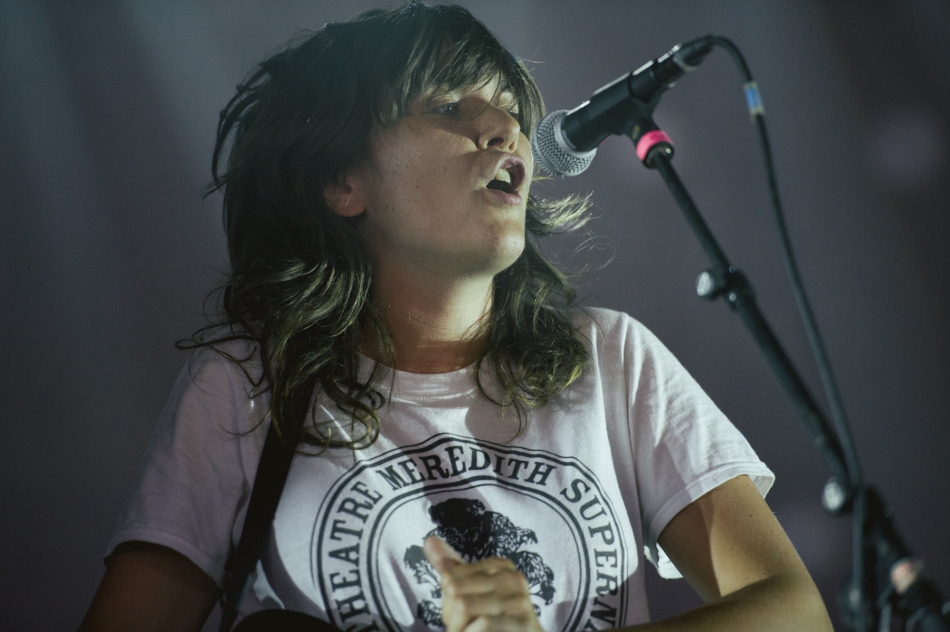 It’s also clear where Barnett’s comfort zone is. It’s well into her set before she says anything to the crowd, though this is a kind group who’ve heard “No One Really Cares If You Don’t Go to the Party” on the radio a hundred times and are singing along to “Depreston,” a song about gentrification and property values. But when she plays a solo her body turns into a rubber band and she loses herself in something ecstatic.

It’s easy to imagine a day when Courtney Barnett will be headlining festivals. She has the songs and she has the energy. The ability to command a stage is still forthcoming, but you can see that she knows it’s something she has to work on. It’s growth we can look forward to seeing. — AF

PJ Harvey knows how to make an entrance. She walks out onto the Arena stage with her band in single file, including a mini drum procession, with her saxophone in hand and wearing an amazing black feather vest.

The Arena stage is filled from end to end with her band, no mean feat, and the crowd is spilling out from the tent. If Polly Jean doesn’t say much between songs, it’s because she has the sort of presence that allows her to get away with saying so little. The profundity of hearing songs like “Let England Shake” and “The Words That Maketh Murder” a week after the UK’s referendum is not lost, even if she doesn’t call direct attention to it. 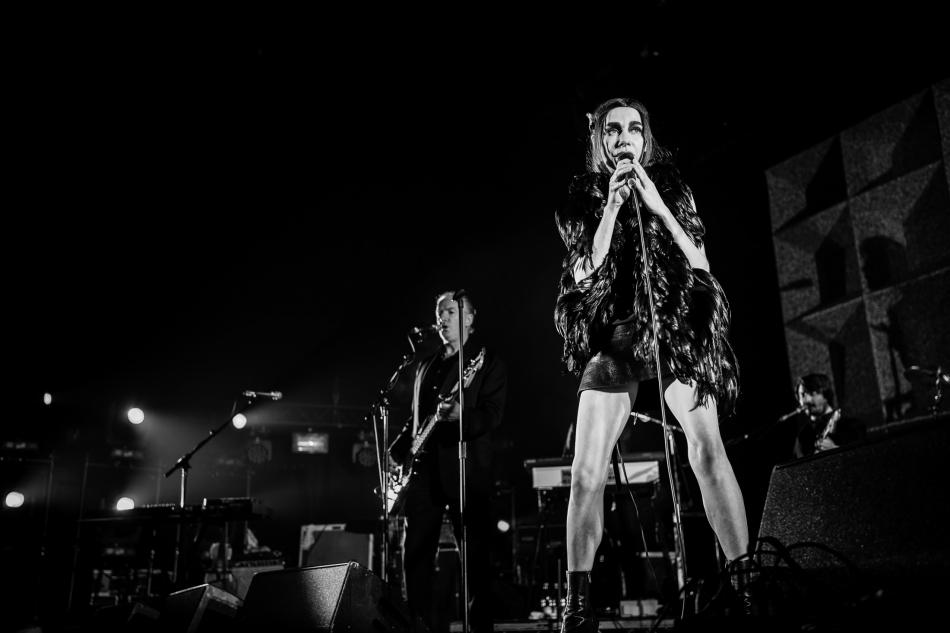 It’s not as the PJ Harvey is someone you go to see for lightheartedness. The shift away from political drama to songs from To Bring You My Love, including the title track and “Down By the Water” fills the space with a dark energy.

She closes with “River Anacostia” from her latest album, The Hope Six Demolition Project. Slowly, her band join her in a perfect line, singing the final lines together in a communion that’s almost spiritual. Though the crowd lingers, cheering for more, it’s too perfect an ending to follow up. — AF

We went out to see Tenacious D thinking it would be a laugh, and it absolutely was. Jack Black on stage is essentially the guy from School of Rock, and Kyle Gass is the guy who is not Jack Black, i.e. an excellent straight man who deals with Black’s over-the-top emoting. For goodness sake, there’s a guy in red body paint and pair of furry trousers playing the part of Satan.

It’s 10 years since the release of The Pick of Destiny, and the set features heavily from the record. A rare outing for “Master Exploder” turns into a somewhat elaborate Milli Vanilli joke, and the segment culminates in “Phoenix,” which acknowledges that sales for The Pick of Destiny were less than stellar. Even if it’s heavy handed in the way that only main stage acts can be, the display of performance is admirable (Black’s repeated mispronunciation of “mange tak” is less so, but points for trying).

Despite the duo’s best efforts not to be serious at all, the crowd is definitely taking them seriously. This is typified in the mass singalong of “Tribute,” which explicitly states that it’s not the greatest song in the world. But if you can’t get in on the joke, what’s the point? — AF

It starts with a resounding “HU!” from the crowd. These days there is something special about everything from Iceland thanks to their football teams’ success at the Euro 2016 and their now legendary HU!-cheer. This event is no exception. Júníus Meyvant, on stage preparing for the first song, seizes the opportunity and gets the whole tent to roar “HU!”, and so a pleasant afternoon begins in the best possible way.

Június Meyvant has brought quite an orchestra to the setup. Eight people in all, including three of them playing wind instruments, kicking off with a surprising instrumental take, indicating that Június Meyvant has much more to offer than the soft, folky tunes from his celebrated first EP. The likes of “Gold Laces” and “Color Decay”. We got those beauties, of course, but the red-bearded Icelander takes the audience new places from song to song. Hushed tunes, full-blown orchestral compositions and solo appearances with only Júníus Meyvant on stage with his guitar.

At the center of it all, his trademark voice, both smooth, raspy and raw, adding some edge to the folky softcore. In between the melodies — during the sometimes too long breaks — he entertains with a profound sarcasm that stands in contrast to the songs, many of them taken from his forthcoming debut album. After this afternoon, that also ended with a “HU!”, expectations are mile high. JG

There really is no one like Bisse. He blew up Gloria with a high voltage performance, making a clear statement: he is one to watch in the next few years.

He enters the stage as colorful and powerful as his music would lead you to expect. Glitter on one cheek, painted oversized eyebrows on the other, red lipstick, red nails, circular sunglasses, and — when he took the glasses off — a determined, piercing stare under the blond hair. And backed by a tight, intense three-man-band he delivered his shouting, rattling songs; this blend of rage, light, darkness, tenderness, new-wave and punk, that is nowhere else to be heard. 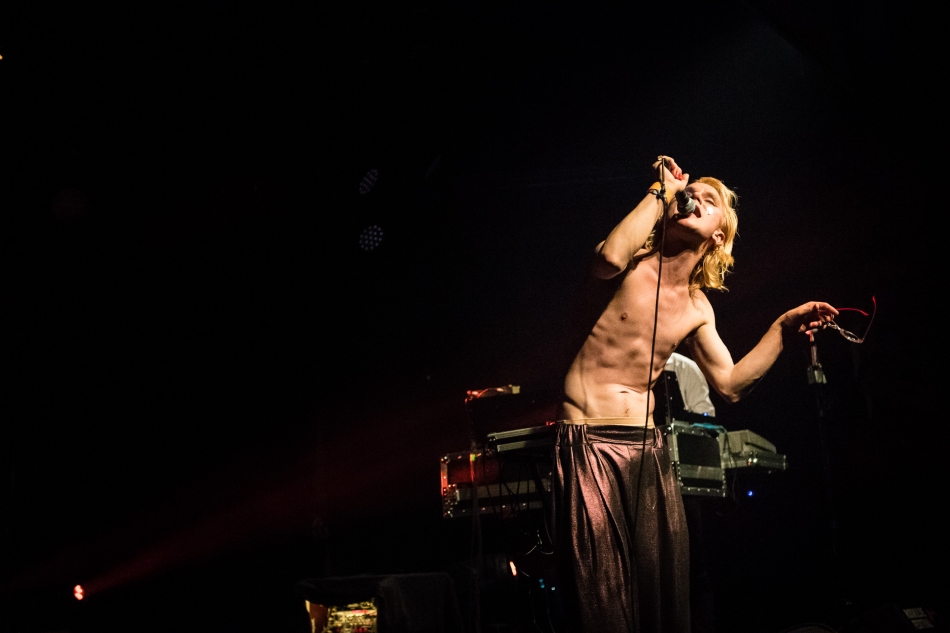 Bisse shouts more than he sings, flitting around  the stage, changing dress three times and dancing with a naked torso, sexy and edgy at the same time. And he has a lot to say to the world. He has released four albums in a single year, and though their quality can fluctuate a little, and though it often was hard to distinguish the words from each other in Gloria, he gives everything he has, an artist at his most beautiful, leaving the room breathless. Even when he announces that he is about to do some ballads, it takes only a few seconds before the first ballad turns into a raging roar.

I adore Savages. I adore lead singer Jehnny Beth, the black intensity in her eyes, her explosive moves and unbreakable voice, and this Thursday night she and her three bandmates underlined what has been obvious to the world the last three years: Savages is a ripping, gripping and ruthlessly beautiful live act. 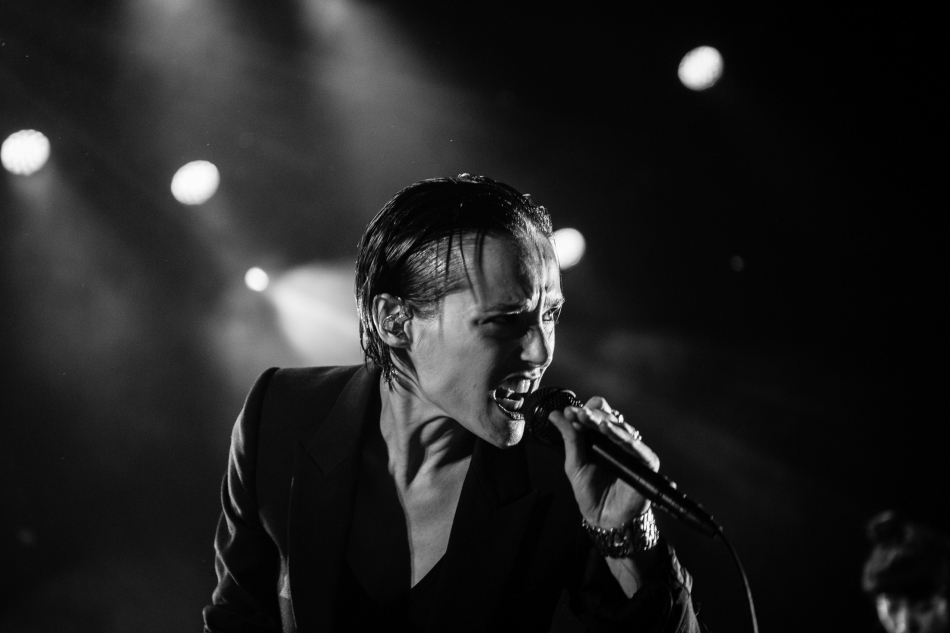 Jehnny Beth is above all the mesmerizing star. Pitch-black backslick, red lipstick, pale skin and dark suit. When she stares or points, she leaves a mark of latent danger. She is known for her interaction with the crowd, crowdsurfing and crawling over them — I last experienced it this April in Boston, USA — but that dimension was unfortunately missing at Avalon.
That said, Savages lit the tent up with their energetic darkness and songs about anger and love turned bad, both in their ballads and in their tight punk explosions. JG