An hour of two drummers doing there thing sounds like a hard sell. What on earth would they possibly do for all that time?

But Greg Fox and Kid Millions are two of the best drummers in New York. Their day jobs in Liturgy and Oneida respectively constantly push them outside of your standard rock drumming, and they’re not afraid to let things get a little weird. They spend the first twenty minutes of the set sat on either side of a snare drum with a backing track fading in and out over them, Kid Millions with a serene, trance-like expression on his face the whole while (Fox is a bit more fidgety, though it’s impressive watching him get up and shift around without it affecting his playing). 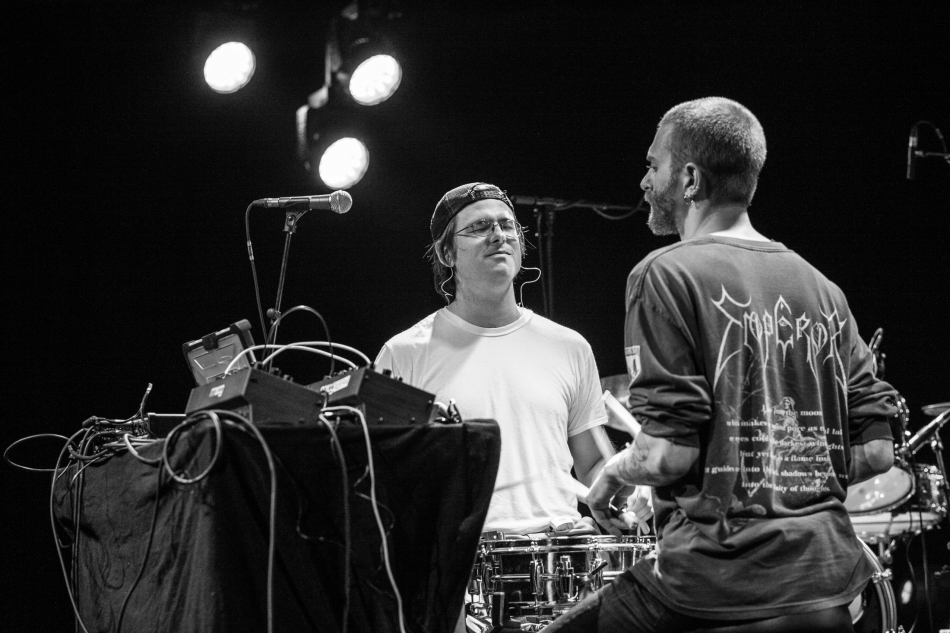 Watching each man at his own drum kit has a different feel. The delirium of the first song has evaporated from Kid Millions, and he’s now pulling faces as though it’s his college roommate sitting across the stage. The two communicate through a series of nods, with a synchronicity that is boggling. They are so in synch, at one point they each cast an empty water bottle on the ground at the same time.

If experimental music can lack an organic element, the Fox Millions project makes up for it. Maybe you can’t dance to it, but this has pretty much killed the gimmick of having two drummers for any other band to come. — AF

I arrive at the edge of the Arena tent, coffee in hand, tired from work, desperately needing a lie down. Not the best mood to dispassionately review a gig. The crowd is immense, and a good third of them looking like carbon copies of Mac himself, so no chance of seeing much. Mac and co take to the stage (or rather, as the noise from the crowd leads me to guess that they are coming on), look at each other goofily as they tune up. “Get comfortable,” Mac tells us, and at that I realize that it’s Friday, I’m drinking coffee, I’m at a festival, and things aren’t quite the disaster I’d made them out to be. 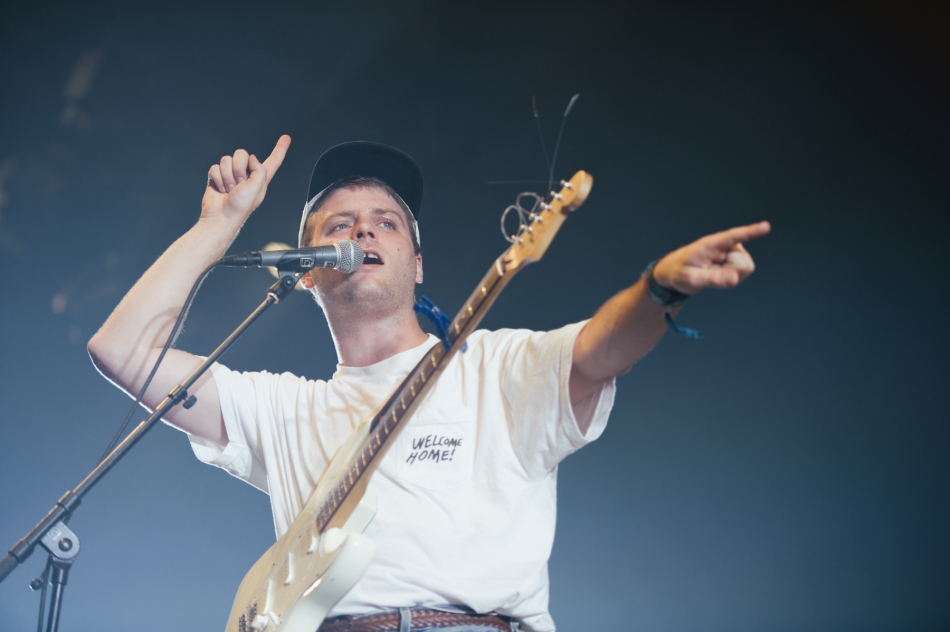 No matter what you think of Demarco’s output, he has charm. He stands before thousands of people as easily he would be jamming in front of a few close friends. But although there are plenty of people gushing with enthusiasm for renditions of “Salad Days” and “The Stars Keep On Calling My Name”, the predominantly casual crowd drown things out a bit. This is painfully obvious during the David Syvian-esque down-tempo love song, “Another One”. Given that Demarco’s output can be a little on the samey-side, these keyboard-driven tracks become among the most interesting. But the chatter in the crowd starts to drown out everything. I suppose that’s the danger of being so laid-back. — CC

Colin Stetson and Sarah Neufeld made names for themselves working with Arcade Fire and other indie darlings, but their work as solo artists does not approach those pop turns. It’s hard to even imagine the conversation that led them to decide that their instruments, bass saxophone and violin, were the two destined for a collaborative effort, but it’s for the best that they know better than we do. 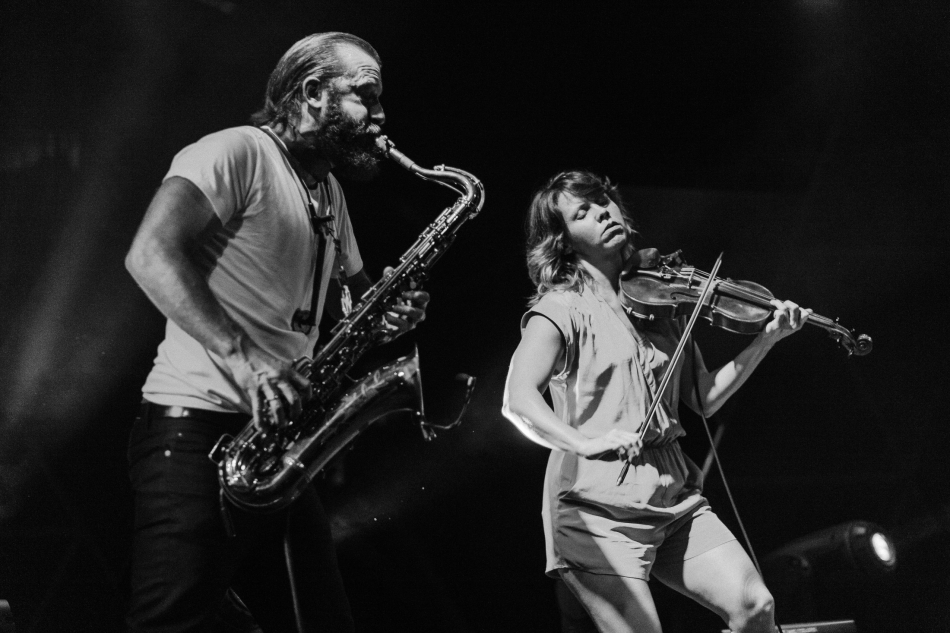 Neufeld’s violin playing feels like a series of loops, reflected in her own songs as well as her collaboration with Stetson, and it’s this light thread that acts as a guide through their compositions. Stetson, by comparison, offers more range, from the thin and reedy to a gut rumbling frequency, as on their final song, the title track to their album, Never Were the Way She Was.

It’s not only their joint album they play. Stetson provides sax for one of Neufeld’s pieces and each of them trading off in performing their own songs while the other sitting quietly to the side, setting a relaxed example for the assembled crowd. It’s weirdly perfect music for a rainy afternoon that has people taking flight into the sheltered Gloria space. The only way it could be better is if there was room to get rid of the wet rain gear. — AF

A muddy field is not really the right venue for an encounter with Peaches. Her confrontational brand of eletro punk is more befitting of a grimy basement. Her cartoon amazon warrior outfit, graphic in its anatomic detail, more than befits the stomach-churning stabs of bass that issue out of the PA. It feels more like an extreme form of interrogation than a musical act, but you get the impression that’s exactly what she’s going for. — CC 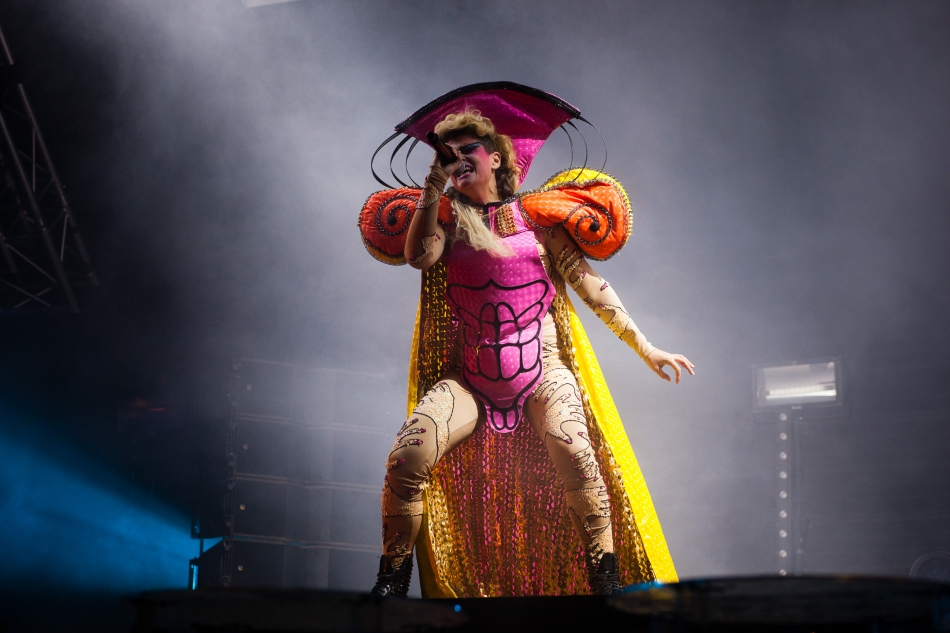 There are no two ways about it: it’s a bit of a dispiriting, wet day today. But over the years we have discovered a secret, albeit a fairly obvious one: when things are looking a bit down and dreary, go find a West African band. And Niger’s favourite band, Tal National, are precisely the people to save this rainy Friday evening.

Look, if you’re in the habit of reading several different Roskilde reviews, you are going to encounter a recurrent word in conjunction with Tal National: tight. Certainly a merited adjective, if not exactly the most descriptive. The core sextet (although reportedly the band can consist of upwards of thirteen musicians) are preternaturally in synch, weaving disparate rhythmic patterns together, stopping and starting without warning, keeping everyone on their toes. The audience, many of whom are in the Avalon tent mainly to shelter from the rain, take instantly to the skill and enthusiasm that is at the heart of this group. 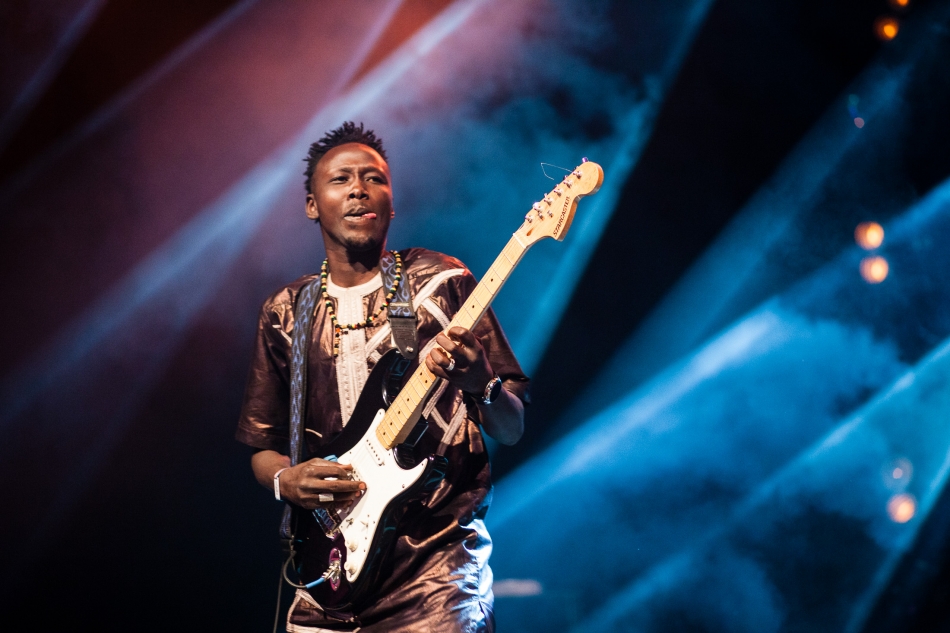 As they say themselves, Tal National are all about unity. Its members hail from every part of the country, come together to travel from town to town (while also holding down day jobs) spreading the music. One image from their set speaks volumes: the band’s defacto leader, Hamadal “Almeida” Moumine, picks up his bandmate’s drumsticks and shows them to the crowd. They are both splintered right through the center. “This happens every time, he is a very expensive drummer.” The man in question beams on, steam pouring off his bare shoulders. — CC