For a solo artist, little additions can make worlds of difference. As a folk singer with a belter of a voice, he could easily carry himself through a set alone. He proves this quickly when he swaps his guitar for a violin on the outro of “Short Life,” and when he manages to lead the audience in a sing along on “Way Go Lily” (whereas opener Rebecca Collins failed to get people to join her on a cover of “My Favorite Things”) — and these are only his opening two songs.

But Amidon isn’t alone. He has drums, bass, and assorted noise provided by Chris Vatalaro, and these additions do make a difference, sometimes by just filling in the bottom and sometimes by making a startling racket. And it allows for a sense of preservation of what — besides Amidon’s somewhat solemn delivery — is so alluring about the music in the first place. 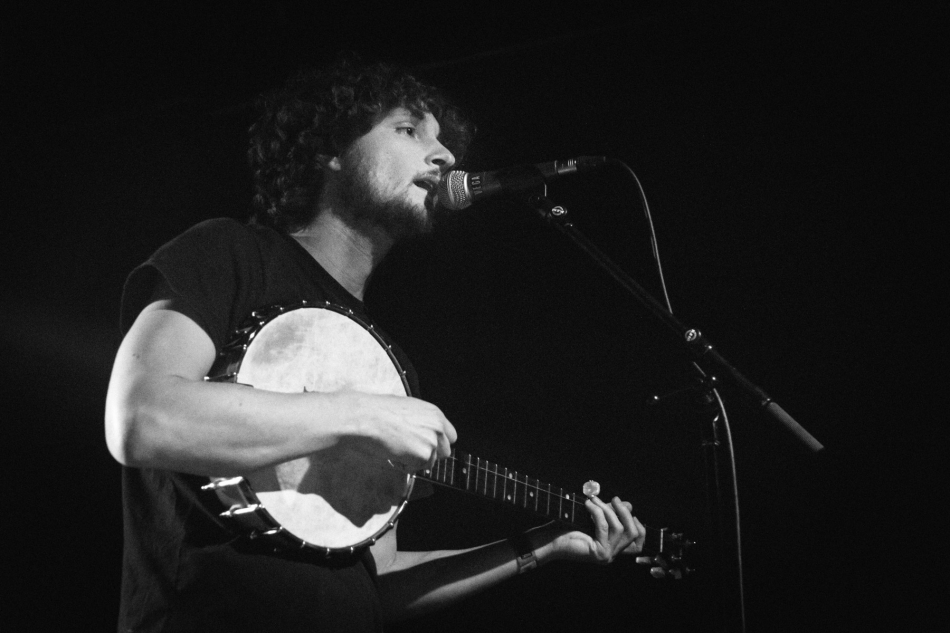 Aside from being a talented singer-songwriter, aside from him having that clear, crisp voice (with or without the countrified warble), much of Amidon’s performance hinges on an unexpected humor. There’s chatter about his latest album being inspired by Jimi Hendrix contacting him from the grave and telling him to make round music (what that means Jimi never qualified — which Amidon considers to be “an asshole move”). There’s a digression about Chet Baker’s “Do It the Hard Way” that turns into a further digression of scat. There’s a story about taking a nap and dreaming about using a tiny, fuzzy donkey as a pillow that lasts several minutes.

The humor is in the music, too: “My Old Friend” ends in a shrill scat following the Chet Baker musings. A jig played on the violin devolves into the sort of choked scratching any parent with a child learning to play the violin has heard a hundred times over — but Amidon is making eye contact with a laughing crowd as if wondering for how long he can get away with it. And it’s in a perfectly earnest cover of R. Kelly’s “Relief,” in which he leads another success sing along, but still finds time to mention that he is thankful that R. Kelly has “written a song with a shifting relationship to reality.” Much like Amidon doesn’t need Vatalaro assisting him with the music, he doesn’t really need this bizarre humor either. But his performance is certainly more special for both of these features.