“My hair looks like shit today,” says Neko Case as she takes the stage at Bremen Teatre, “but I’m still going to play this show anyway.” It’s the sort of blunt determination you’d expect from a person promoting an album called Hell-On. Or someone who is coming up on 25 years in the music industry. Or maybe just someone certain enough in her ability to deliver that she can make demands of the audience to forget the photos and be present for an evening.

Neko Case is a presence, and what immediately stands out about her performance is the density of the sound. Nearly every song features three or four guitars and Case with two or three backing vocalists echoing her. This goes beyond being faithful to her albums and creates a richness that fills the entirety of the theatre. It can sometimes bury how powerful Case’s voice is, but her vocals come through full force when unleashed for “Maybe Sparrow” and after a slow build on “Halls of Sarah.” It’s to greater effect that her vocals are usually measured and she chooses to unleash them at particular moments.

This density of sound also highlights just how talented her band is. The harmonies don’t blend so much as ricochet off of each other in a hall of mirrors effect. Of the seven people on the stage, only the drummer and bassist play the same instrument throughout the set, and it’s nothing short of impressive that the band is so tight with that many moving parts (related: credit due also to Case’s very hard working guitar tech). Being so well rehearsed, it perhaps isn’t much of a surprise that there is a real sense of camaraderie among band, who trade barbs ranging from joking about who’s getting fired that night to the drummer somehow being bullied into break dancing before beginning the encore.

Case herself is warm and primarily self-deprecating when she talks to the audience. It works, though, because her jokes are just silly enough that they’re always funny instead of uncomfortable. “After that good time,” she says when it’s been revealed that her drummer is quite adept at The Worm, “we’re going to bring you down with this bummer of a song.” That bummer is the title track of the new album. No one in the audience seems like they’ve been let down. 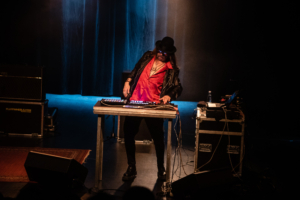 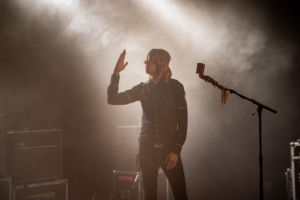