It’s hard to think of a band as fun, weird and childlike as Deerhoof as, well, old, but 20 years in the business is a pretty significant amount of time. With around sixteen albums crowding their discography, the San Franciscan quartet’s unique brand of ultra-hyphenated, off-kilter art-rock has undergone endless refinements. If any band deserves to share that famous trope of the Fall, “always different, always the same”, it’s Deerhoof, a band that could record an album using nothing more than kazoos and still be immediately recognizable.

Case in point: towards the end of their set, I am puzzled by an familiar, but unusually riff-heavy song. After a couple of choruses, straining my ears, I eventually untangle the words: “Pour Some Sugar On Me.” I defy you to go out tonight and find me another band worth their salt playing Def Leppard covers, but more importantly, to incorporate them into a set without it sounding completely bonkers. 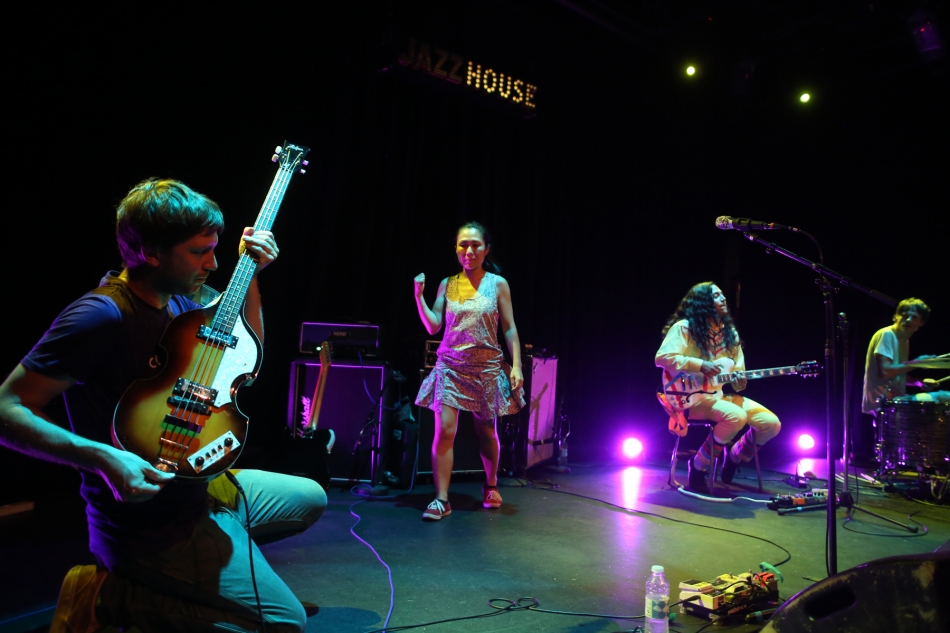 It helps of course that Deerhoof’s latest album, The Magic, comes closer to standard rock tropes than most of their recent records. But for every Ramones-channeling “That Ain’t No Life For Me”, there is still a piece of their patented balance of unhinged and deadly precise, a la “Kafe Mania!”. Unhinged is a fairly apposite descriptor of the set as a whole, with John Dietrich’s guitar losing strings every other song.

In these technical pauses, drummer Greg Saunier comes to the rescue. Channeling Crispin Glover and Steven Wright simultaneously, Saunier embarks on tortuous meditations on the heat in Denmark and how it might be affecting both the tuning and the life-span of guitar strings. A good portion of the audience is baffled, but I would be the first to buy Saunier’s HBO special should he decide to ditch the drums for a stand-up career.

For all their fun, there is a challenging element to Deerhoof, a wry art to their playfulness that can sometimes be at the casual listener’s expense. Returning to stage for an encore, flushed by a blistering set, singer Satomi Matsuzaki spends a good ten minutes teaching the audience a rhythmically-challenging call-and-response. Satisfied that we’ve got the gist, the band get going. The song lasts a minute. The band leave. Best ending to a set I’ve witnessed in a while.