Last time we saw East India Youth in Copenhagen, he was opening for Factory Floor at a more or less deserted gig at Vega. Already a year and a half ago, when all Will Doyle had to his moniker was the Hostel EP, we recognized an artist on an undeniable ascent. Now, after two albums and a nomination for the Mercury Prize, East India Youth is the main act.

As a live act, East India Youth is a testament to passion and virtuousity. Doyle stands alone on stage, surrounded by keyboards, laptops and drum machines, a bass guitar around his neck and drum sticks in his hand, like a sharply dressed Wizard of Oz, controlling his fantastical universe from the shadows. The set begins with “The Juddering”, a glitchy instrumental that slowly emerges from static into lush synth orchestrations, before transitioning into “Turn Away”, his latest single. Doyle’s voice soars above the background, reminiscent of the Pet Shop Boys’ Neil Tennant, clear like a choirboy. 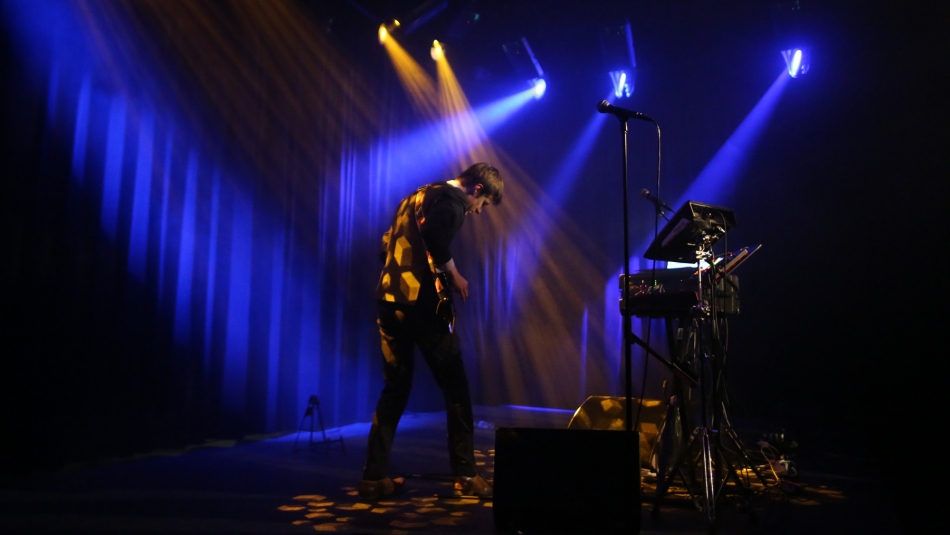 East India Youth shifts between the angelic and energetic, electronic and analogue, experimental and anthemic. There is a restlessness at the heart of his music, though that has evolved from Total Strife Forever‘s austerity into the warm colours of Culture of Volume. That transition is reflected in the live renditions of older songs like “Heaven, How Long”, which effervesce with random modulations.

It’s unfortunate that at the height of “Hinterland”, which has the whole room nodding and twitching, the sound suddenly cuts out. After a few minutes of jumbling around with wires, a chance for the audience to catch its breath, Doyle is back online, launching back into the track with even more abandon than before.

The set draws to a close after less than an hour, not nearly enough to do justice to the amount of material produced in the last 18 months. I am a little disappointed not to have heard “End Result”, my favourite track from the last album, or the wonderfully cheesy “Beaming White”, but that’s just an excuse to catch another East India Youth gig as soon as possible.

Copenhagen, I love you, but you’re bringing me down.

In the best of all possible worlds, I wouldn’t have to write this review. The city would have crammed into the smaller of the Vega siblings, and I could simply write the words “Factory Floor” and “East India Youth” for people to knowingly nod their heads and synchronise their inner bpm.

As it is, only the select few, the knowing or the fortunate, stick to the walls as Will Doyle, or East India Youth, poured waves of synth into the room. It feels like a scene from a film or tv, like Durutti Column playing in 24 Hour Party People, or even Julee Cruise stuck in that red bar in Twin Peaks. His set is constantly shimmering from one song to the next, full of brilliant melancholy and brash crescendos. Dom and Gabe from Factory Floor are listening in the middle of the room. “Pretty good, eh?”

Statistically, few of you readers will have seen him, so go buy Hostel, his latest EP, which as well as being a great record, also distinguishes itself for having been released by a strange new animal known as The Quietus Phonographic Corporation.

The yellow and blue glitch projections, as well programmes scattered around the place, are evidence of another in a long line of Factory Floor’s collaborations with visual artists. Tonight Dan Tombs is providing the sights, as part of CPH:DOX, the International Documentary  Film Festival. In the middle of the oscillating images, the band begin the same way their record does, with “Turn It Up”, which in this case is a direct order to the sound man.

I often misuse the word hypnotic, applying more or less to anything vaguely repetitive or psychedelic, but Factory Floor definitely induce some sort of altered state. The volume is fantastic, and Dom’s short loops gain urgency as they slowly modulate, blending into Gabe’s drumming, which manages to add an afro-beat flavour to the post-punk and disco beats. Singer and guitarist Nik lays on heavily effected vocals, unintelligible words, and harsh guitar stabs. It sounds rather ridiculous when described, but the discord of a guitar hit with a drum stick is given some sort of structure by the bassline, so that I start to imagine chords where chords are impossible.

Though I’m able to recognise the main synth line or sample from most of the album tracks, we are hearing something entirely different. It’s not that song structures are substantially altered, or that the band is improvising on the themes, but rather that each song consists of certain elements that, when played live, are allowed the space to enter and exit as instinct dictates. This is a band that has spent years crafting these sounds, and is able to fit them together each night in a way that is always different, but always the same, to paraphrase John Peel. When I interviewed them, they talked about wanting to keep the human element in electronic music, and it is that mix of perfectionism and human error that creates a concert like no other.

So get on the next boat to Oslo and catch up with them, or pick up the album, but for god’s sake, do something.

Photos by Amanda Farah Last time we saw East India Youth in Copenhagen, he was opening for
Night two of Sónar is a very different experience from the first night. If the opening night
Since its beginning in Barcelona in 1994 the electronic music festival Sónar has expanded to over 46
Go to Top