The evening’s proceedings were scheduled for a late start Tuesday night, with LLNN kicking things off at 21:30 as the first supporting act. A spiritual offshoot of The Psyke Project, which disbanded in 2014, LLNN retains guitarist/vocalist Christian Bonnesen and drummer Rasmus Gajhede Sejersen, who have more than 20 years of experience between them playing the Danish hardcore scene. Bolstered, and in a way guided, by the addition of Sejersen’s little brother Ketil on synths, the group takes a measured approach to rhythm and tempo, which gives their re-appropriation of hardcore staples like red-faced screams and crunchy guitars that sound like they were strung with rusty chains a fresh sense of urgency and weight. The way LLNN does it, those abrasive elements are coming through clear; doused in reverb and tremolo, their suffocating bigness is not the kind that wears on you, but one that sets the mood. 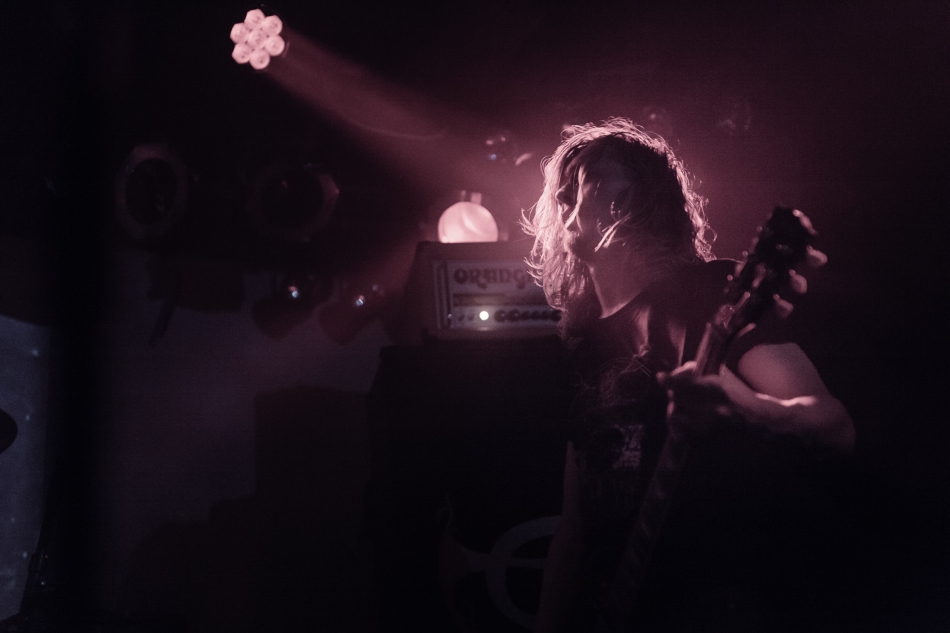 Tombstones, the program’s second supporting act, are interested in a more classic breed of rock. This Norwegian trio still believes in the guitar riff, unabashedly chugging power chords with the palm-muted drive of an icebreaker. Appearance wise, they fit the mould of a throwback, modestly bedecked in Chuck Taylors, tight pants, and shirts ranging from T, to sleeveless, to none. In a context that’s otherwise licorice black (noting the cloaked mannequins at either ends of the stage), Tombstones inject a refreshing bit of regular hard rock into their visions of doom, featuring plentiful doses of sustained growls and droning distortion. This combination helps them build suspense and dread like the best horror movies, letting the audience fend for itself in the dark before the cathartic upswing of a groovy bass lick.

“Guitar strings are not meant to last” quips bassist Ole Christian Helstad at the expense of his six-string counterpart, whose instrument failed him on the previous song. Still, we all cheered when it roared back to life. 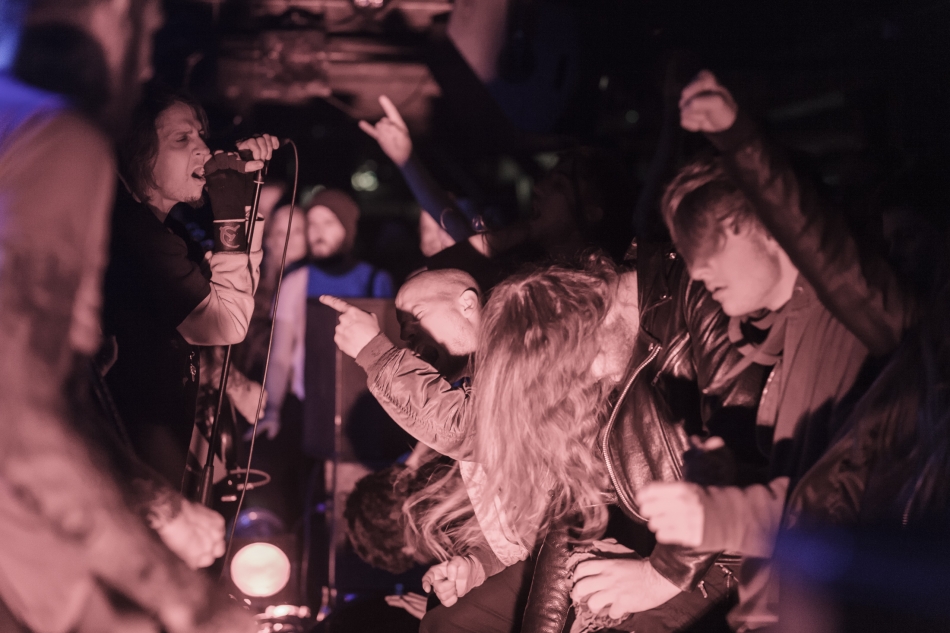 A half hour before midnight, Eyehategod unceremoniously take the stage, futzing with their instruments for a couple minutes. For singer Mike Williams, who’s double fisting a couple beers, that means putting one down to take off his backpack, contents unknown, while drinking the one he’s still holding. At one point Queens of the Stone Age’s “Tension Head” plays over the house speakers: “I’m feelin’ so sick—no more.” The self-canceling proclamation of misery in that lyric is inherent to the very act of singing the blues—by singing about something that makes us feel bad, we feel better. With all the bad stuff that Eyehategod are about to unload on a room full of people, however, that Queens song couldn’t be more wrong.

If you reversed the sound of a giant, rusted-out machine grinding to a halt, you’d get the opening number “Agitation! Propaganda!” The guitars of Jimmy Bower and Brian Patton whine between fits of aggressive chord chomps while Aaron Hill explodes off the drum set like he’s dropping bombs. The drummer matters here, as the gears turn and the machine gathers speed. Williams isn’t as much singing as he is retching, unable to spew more than a couple throaty syllables at a time. The violence of the music reflects the activity at the front of the stage, which seems to liquify into a mess of thrashing bodies. 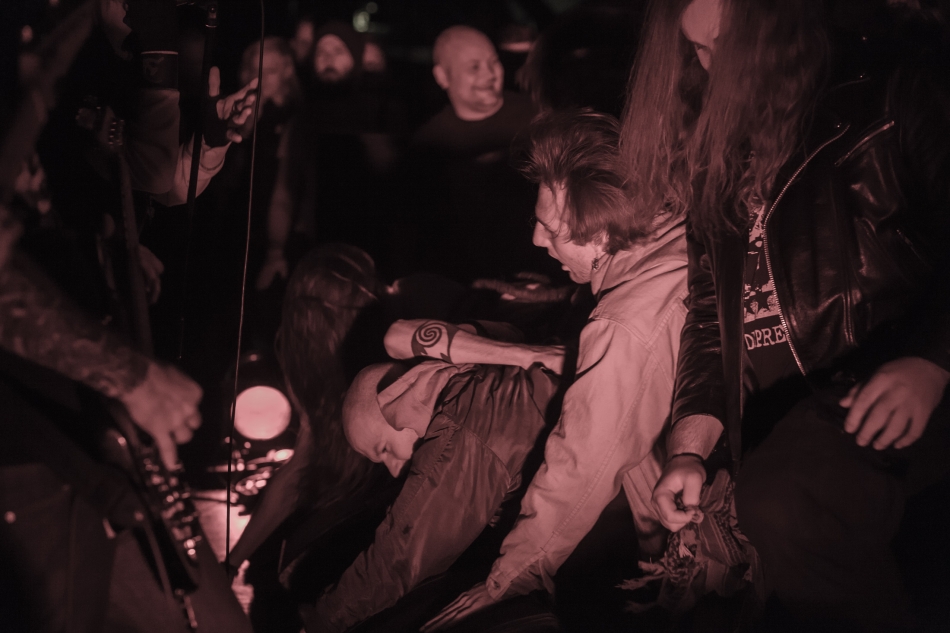 Things don’t settle down exactly. It’s more that you get on Eyehategod’s level, where the stickers on Gary Mader’s bass reading “THIS IS LA. / NOT L.A.” begin to make sense. “New Orleans Is the New Vietnam” is a power-to-the-people rager with an infectious central groove reminiscent of Rage Against the Machine back when they were first coming up in Los Angeles during the early ‘90s. Where both crackle with a fire for social justice, the difference is that neither Eyehategod’s production nor message cleans off the ashes: “Shoes don’t fit, you don’t fit / This shit don’t quit, we don’t fit.”

As they rattle off bangers like “Medicine Noose” and “Zero Nowhere”, Eyehategod make an impressive show of ending songs on a dime. It’s like they haven’t lost a beat in the prolonged absences of them playing together as a group over the years—they’re still as tight as ever. And this is all in spite of the fact that Williams is tying one on, big time. There’s a moment when the band nags him to decide on a song. Williams takes his time, mugging for the crowd a little bit. Eventually he agrees with their choice, “Revelation/Revolution”. Who knows if it’s an act. It’s kind of charming though. We want the guy to rock on.

You know you’ve been drinking the Kool-Aid when the crowdpleaser is a song called “Sisterfucker (Part 1)”. For as filthy and destitute as Eyehategod’s themes can be though, their music is fun. In a live setting, it’s obvious that this is the result of a total partnership between friends. As we near the end of the 90-minute set, the songs go nameless, but they’re no less anthemic in their sense of triumph.

Huh, I guess they were singing the blues. 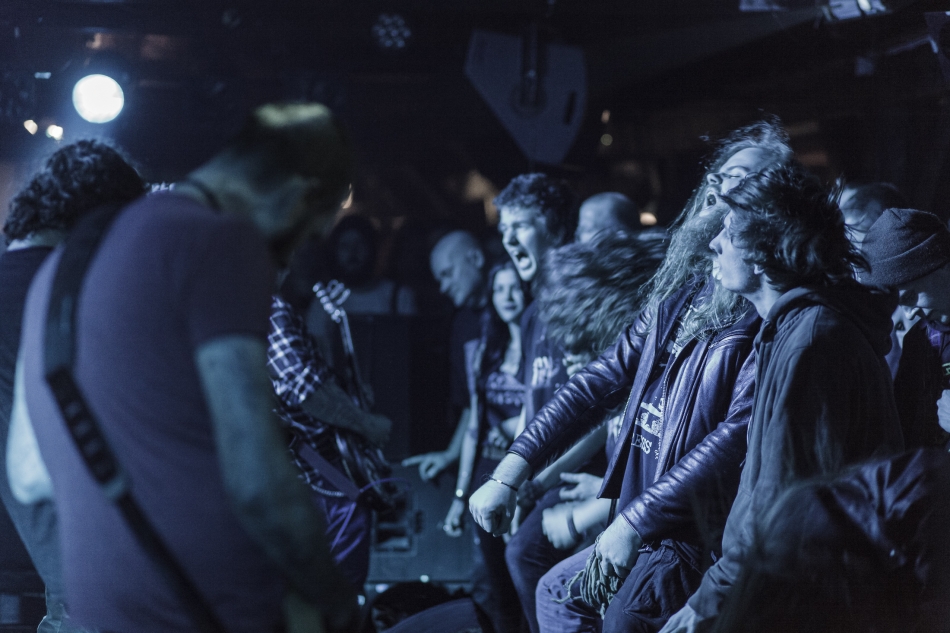