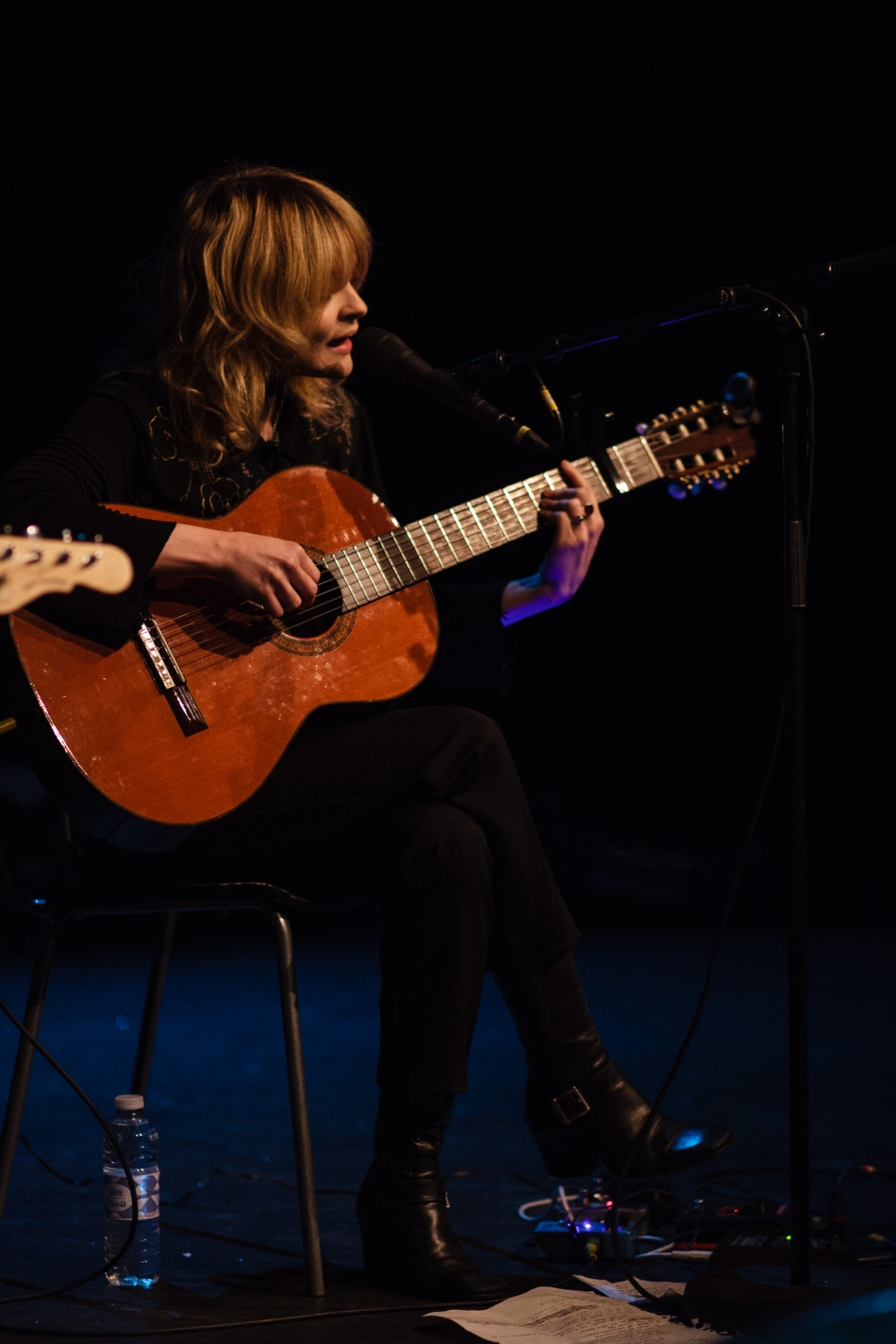 Although the heavy wear on the floorboards shows that this space is more than a jar for fireflies, the size of Spillestedet, Stengade’s main room, probably doesn’t exceed that of your average middle class apartment. For Jessica Pratt, whose recent LP On Your Own Love Again was almost entirely recorded in her bedroom, it’s a good setup.

Same goes for warm-up act Cian Nugent, an instrumental guitarist out of Ireland. It feels like a school dance with a wide open space in the middle of the floor as Nugent steps around a cute couple sitting on the edge of the stage to begin his acoustic set, which garners little reaction, if any, from anyone. This is partly due to the fact that Nugent is a noodler — a highly skilled one, but a noodler nontheless — and it’s difficult to tell whether he’s actually starting something. He specializes in vast-feeling folk compositions that occasionally get lyrical accompaniment but are more often built upon with these impressive technical flourishes. One moment he’s picking through the spectrum of a particularly pretty chord and the next he’s ripping a brassy tone straight out of the Chuck Berry book of licks. And in those moments it may be a secret that his songs do follow some sort of blueprint. I only get smart to it 25 minutes in when I notice myself hanging on every note. Nugent eventually gains the respect of the room, which is about three-thirds full by the time he politely says, “See ya later.”

If you weren’t near the front row just 15 minutes later, you probably didn’t see Jessica Pratt take the stage because you couldn’t for the head of someone’s boyfriend who decided to stand directly in front of you. At this point the place is packed and stays that way for the rest of the show.

While Pratt’s set is certainly one you want to be there for, it’s one of those shows you can content yourself with just listening. Pratt is “the darling in a hidden shroud” from her opener “Wrong Hands,” both in text and performance. The minimal lighting amounts to the stage being washed in a dark green cloud of dry ice. In the middle of it is Pratt, plucking away at patterns “in my mind, in my mind.”

But that doesn’t mean she’s simply turning over recorded material for us. She’s joined by Cyrus Gengras, another musician quietly based in Los Angeles. On “Night Faces,” the clean sound from his electric guitar swells to bring out the warmth of Pratt’s intricate acoustic phrasing, which could otherwise just as easily fade into the knot of some emotive chord. It’s dream pop at the ground level, where the reverb is still cave deep and the melodies clear like emeralds. But you can’t deny the tenderness with which Pratt and Gengras hold every note. That’s where we are, through to the end of the set, in the palms of their hands. Listen and you’ll hear it, during the encore, in the very last song, “What I have in my hands is, it is worth a million in gold.”