It’s been close to a whole three years since the last time we caught up with Moor Mother, Camae Ayewa’s solo noise and spoken word project. In the meantime Ayewa has been keeping busy, releasing records with Irreversible Entanglements, ZONAL, and last year’s Moor Mother release, Analog Fluids of Sonic Black Holes. One thing that has very noticeably changed in the intervening years is the size of the crowd, which has doubled since that night in 2017.

The sonic pallet is still dark, twisted and pained, opening on a distorted, bassy synth drone, and accompanied a lonely, skittish violin. Ayewa’s vocals are low and urgent, more declamatory than rhythmic. “After Images” breaks into a martial kick drum, and marks the tension point between the punk confrontational part of Moor Mother and the gothic, reflective part.

Samples are also an integral part of Ayewa’s music, but they aren’t used in the looping manner of hiphop or techno. Instead the voices of the likes of Paul Robeson appear as ghostly presences that sit uncomfortably next to the noise. They could appear almost nostalgic next to the apocalyptic cacophony, if it weren’t for the obvious histories from which they speak.

The emphasis on time having stopped, of time being “held captive”, is embodied in those clips from spirituals and blues, and appears to situate Moor Mother very much in the Afro-goth tradition outlined by Leila Taylor in Darkly: Black History and America’s Gothic Soul.

But as mentioned above, there’s also a great physicality to Ayewa’s performance. Towards the end of the set she disappears into the crowd, purposefully stumbling into people, tying the crowd up in her mic cables. But that confrontational side is also tempered by empathy, a quick “are you ok?” as soon as the track draws to an end.

As if to disprove any assertions of bleak pessimism, Ayewa ends the evening by completely turning face, with a very short impromptu DJ set. Something like an exorcism at the end of this industrial séance. 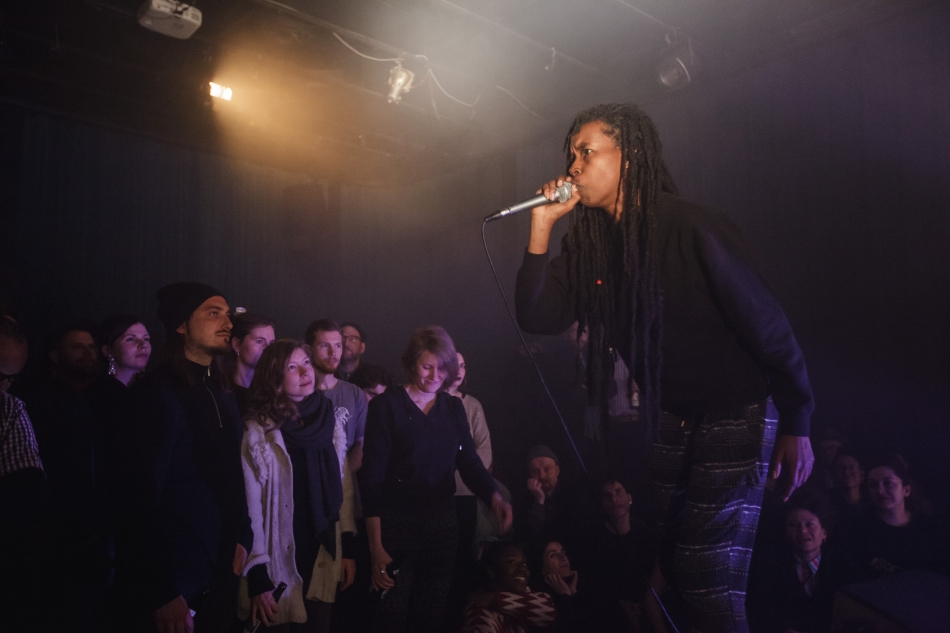