Copenhagen’s newest ambassadors of brooding and theatrical indie rock may have a pun for a name, but their music is inspired by the straight-faced sincerity of bands like The National. Songs like “120” hark back to the grungy power-pop of the 90s and early 00s, whereas their newest single, “Undertaker”, – reportedly inspired by Soren Kierkegaard – sees them going for a more anthemic approach, with a very clear Scandinavian angle. Having supported the likes of Kellermensch and The Floor is Made of Lava, the Awesome Welles are poised to receive their own share of the limelight.

On a sweltering spring afternoon the trio (who play as a 5 piece live) arrived at Black Tornado studios on Refshaleøen to lead us through new single “Out Of The Woods” and two tracks “Wisdom” and “Factory” from their soon to be released debut album. 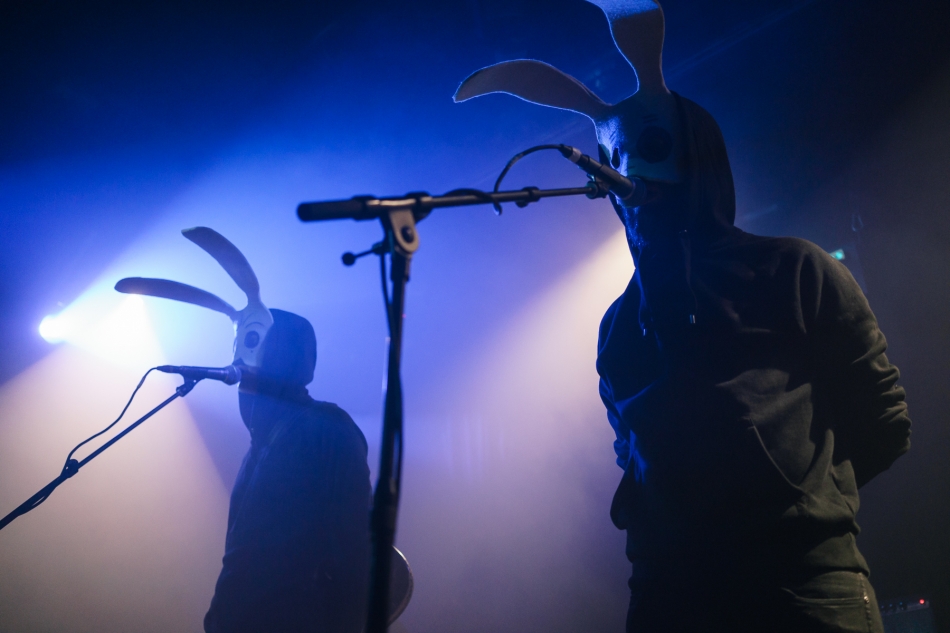 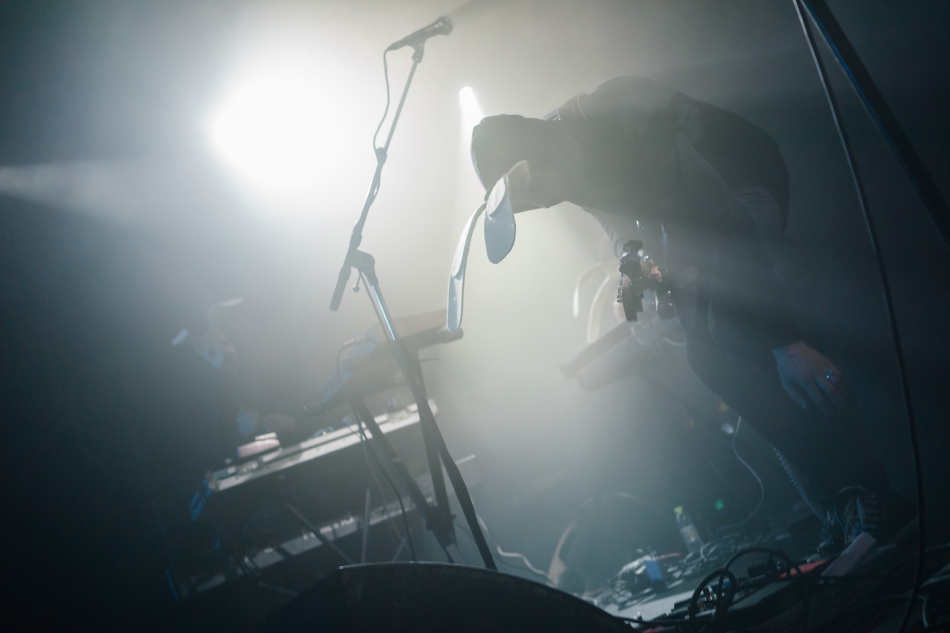 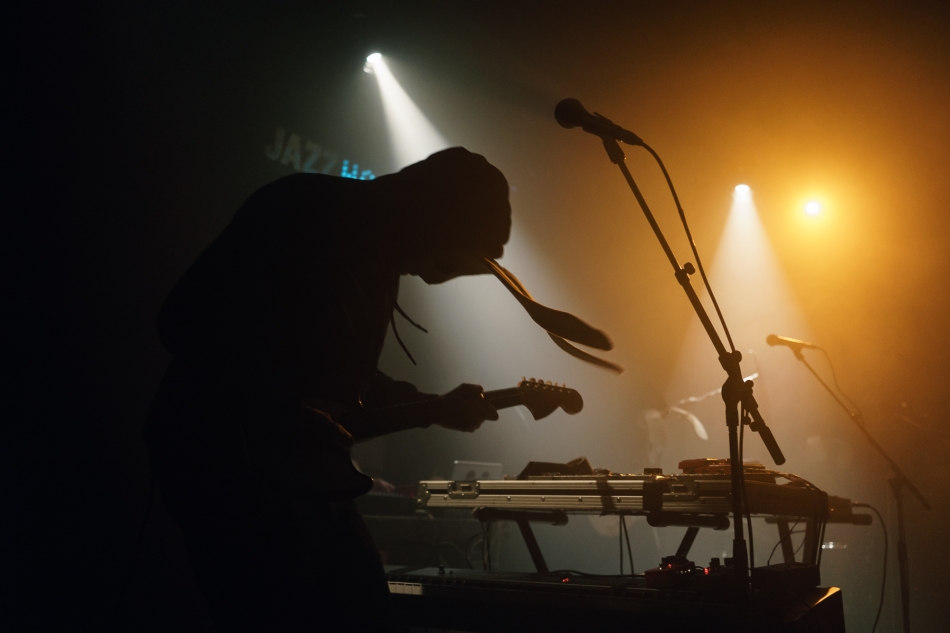 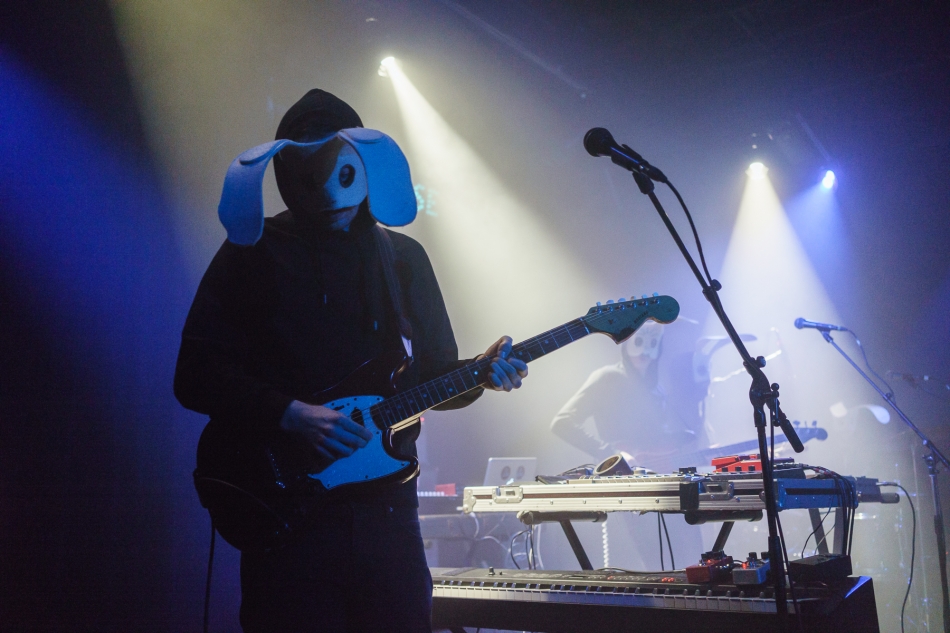 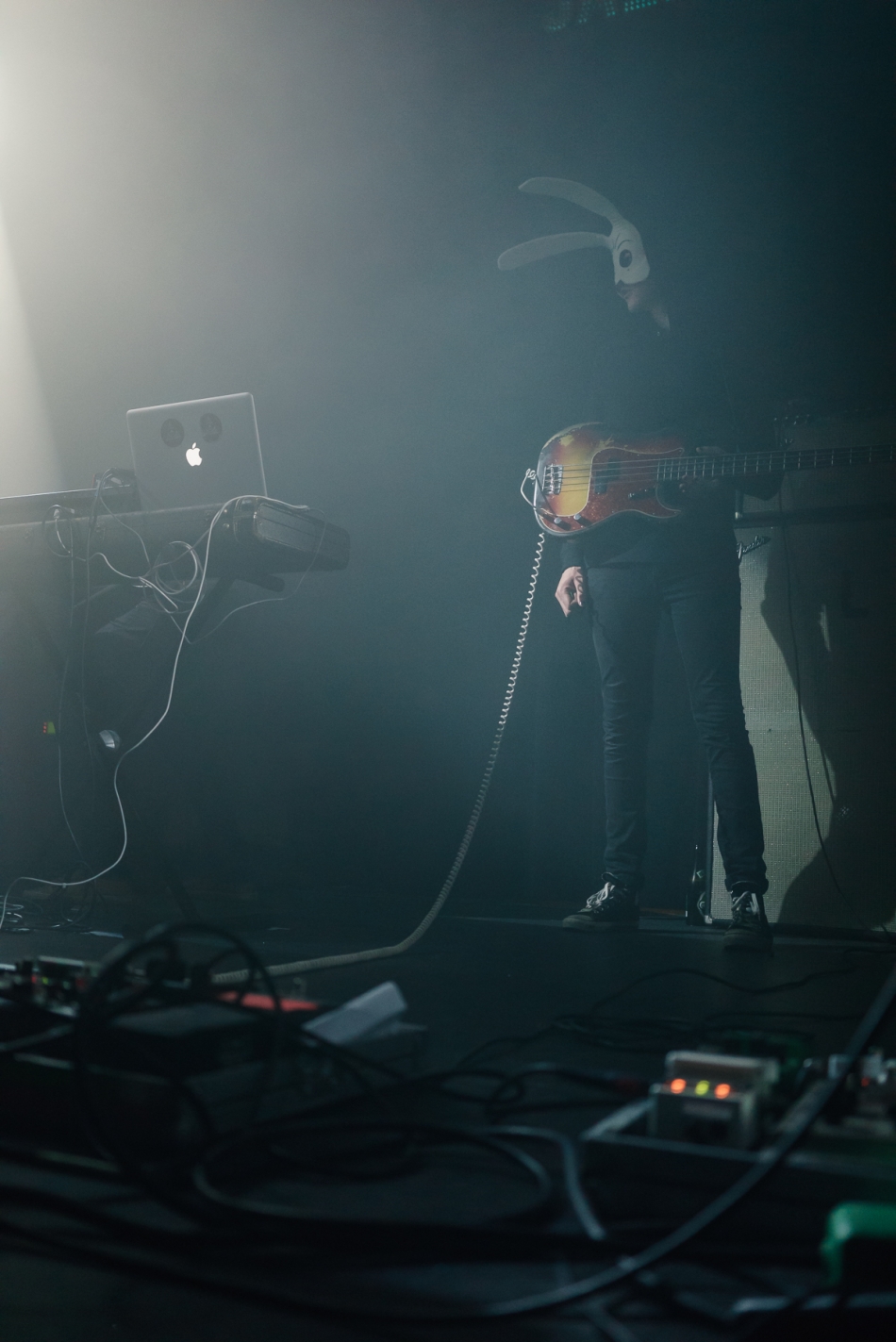 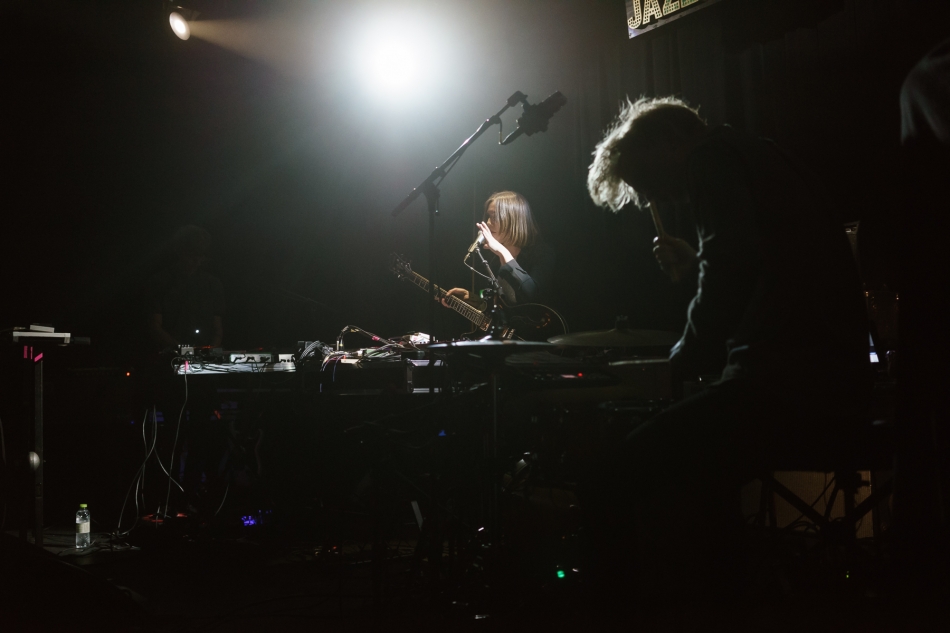 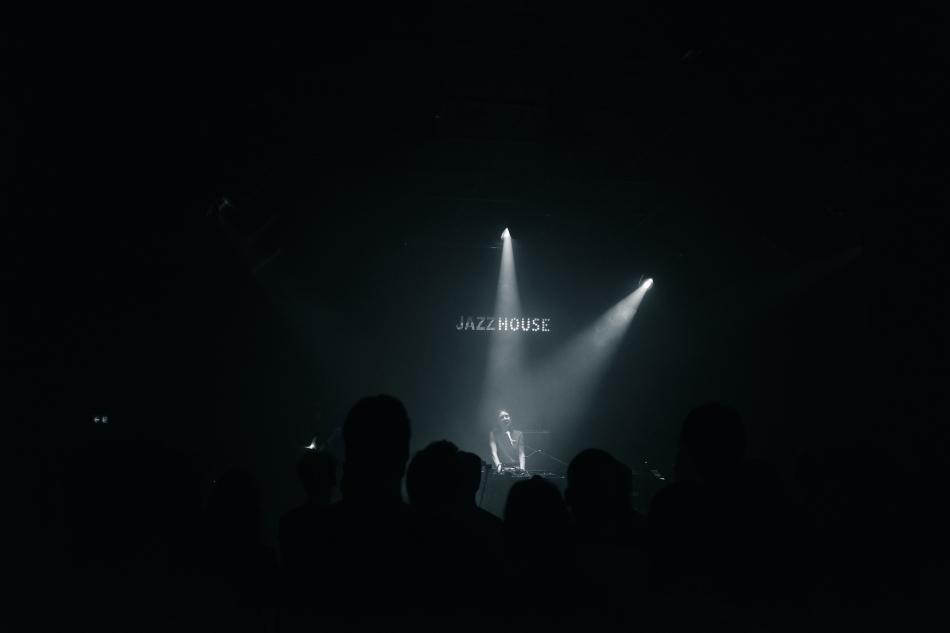 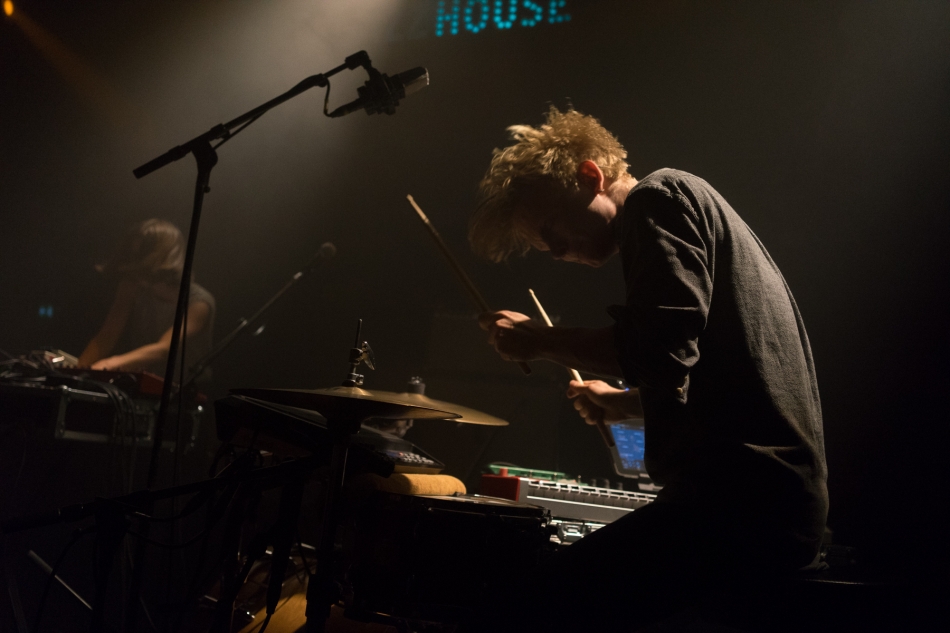 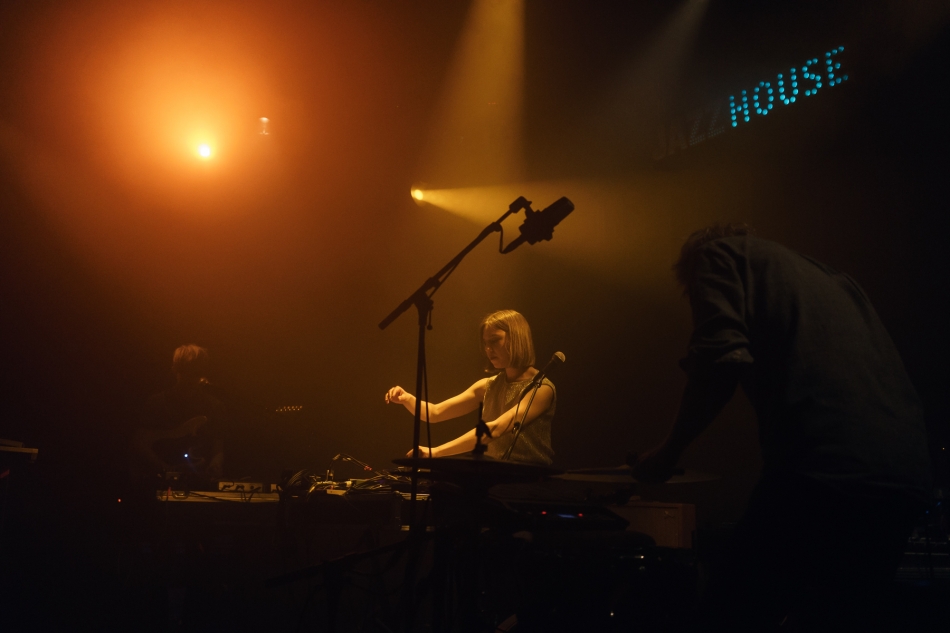 Swans – To Be Kind After thirteen studio albums, Swans have not diluted their power or talent one bit.
It has been a busy year for Here Today. During 2014 our photographers and journalists covered Roskilde Festival, Northside Festival, Trailerpark
Two acts that Here Today has championed since the start of their blossoming careers, Ice Cream Cathedral and

Before arriving at Store Vega it’s like the show has already begun. As the sun shines from a clear blue sky, the heat puts you in a snug and dazy mood – the same that vibrates in the universe of The War On Drugs. The tunes on their newest release Lost In The Dream seems to be the perfect soundtrack to the sunny season that is approaching. Being relocated from the smaller stage at Lille Vega to its big brother Store Vega, is a proof that a lot of the Copenhageners feel the same way.

The lights are dimmed as the six piece band walk onstage to the simple rhythms from a drum machine. The band falls into the groove and opens the night with ‘An Ocean Between The Waves’ from the new album. When the song ends its difficult to raise my hands for applause; the room is simply packed to the rafters. The first part of the show consists mostly of songs from the new album with a clear and loud vocal at the forefront. Lead singer Adam Granduciel is known for his way of slipping out of tune from time to time (in a charming way), his performance this night is flawless. And so is the guitar playing – numerous of guitar solos appears here and there through out the concert and at times it is so epic that even the guitar heroes from the 80’s would fall behind.

The band seems to enjoy their spot on the big stage and the energy is evident, especially while performing hit single ‘Red Lights’, colouring the entire stage in a sharp red veil in the process. As a part of a daily ritual Granduciel brings his polaroid camera on stage and takes a photo to immortalise the evening. Although that turned out being a useless act as Granduciel shows the audience the pictures – theres nothing but blurred lines! This little break isn’t the only respite during the concert – guitar tuning and amp adjusting takes up quite some time which at a point makes Granduciel so frustrated that a firm kick sends his amp to the ground. “I’m sorry for my little..eh.. everything’s alright now” he says after finishing the melancholic and slow ‘Suffering’.

The set is a long one, around two hours, which is plenty of time for the band to play a bunch of songs from the previous album Slave Ambient. Particularly ‘Your Love Is Calling My Name’ works strikingly well. The backing band deserves some credit for a tight and well played performance, of which the saxophone player is worth mentioning as the creater of a beautiful soundboard in many songs. But it is not up for discussion that Adam Granduciel is the main figure in The War On Drugs. When the band finishes the last encore and makes a sincere “Thank you!” the room is filled with a warm ambience (partly caused by the high temperature) and I feel a special appetite for taking over the summer with The War On Drugs as my soundtrack. 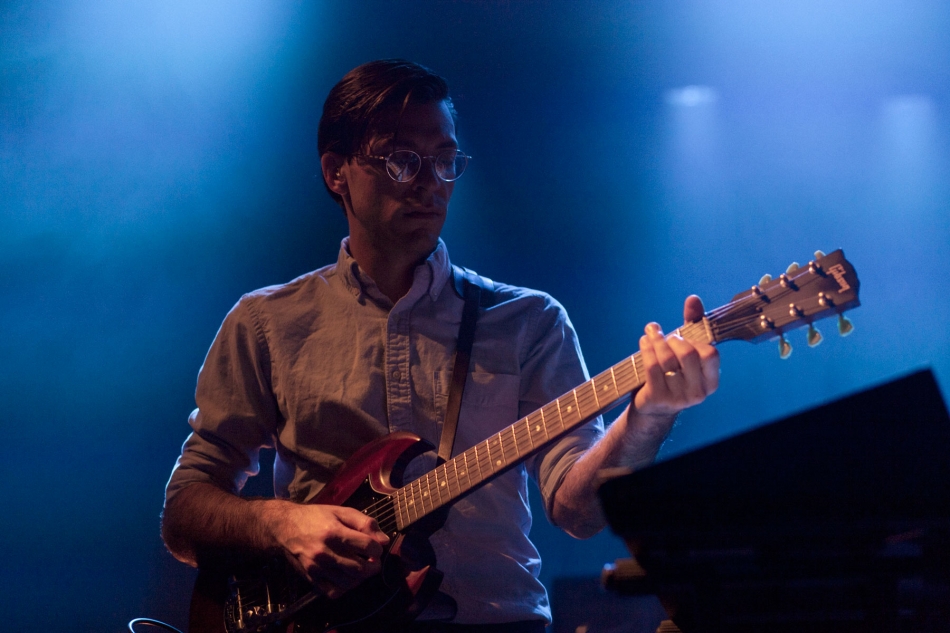 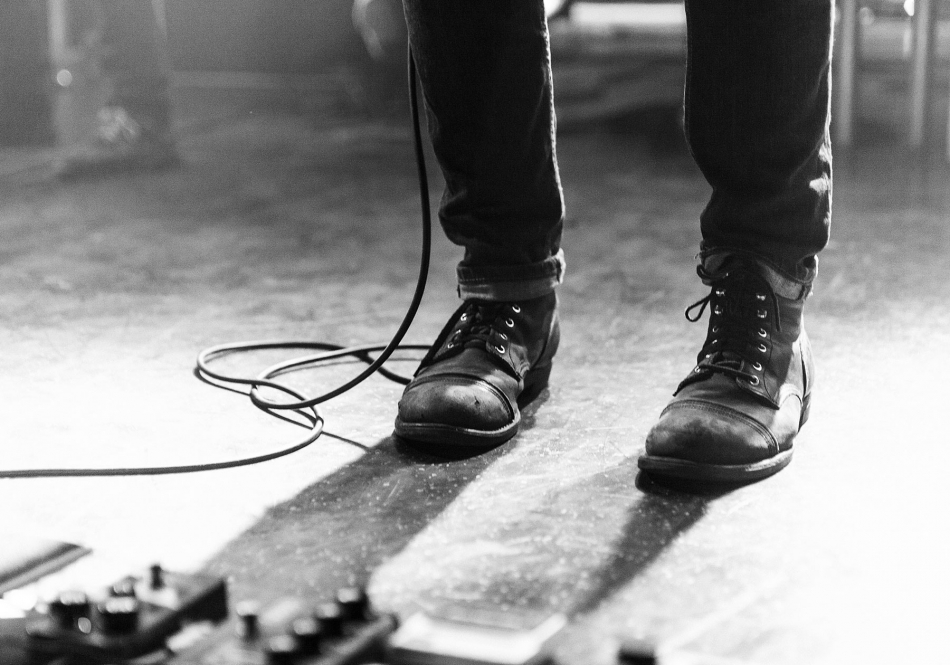 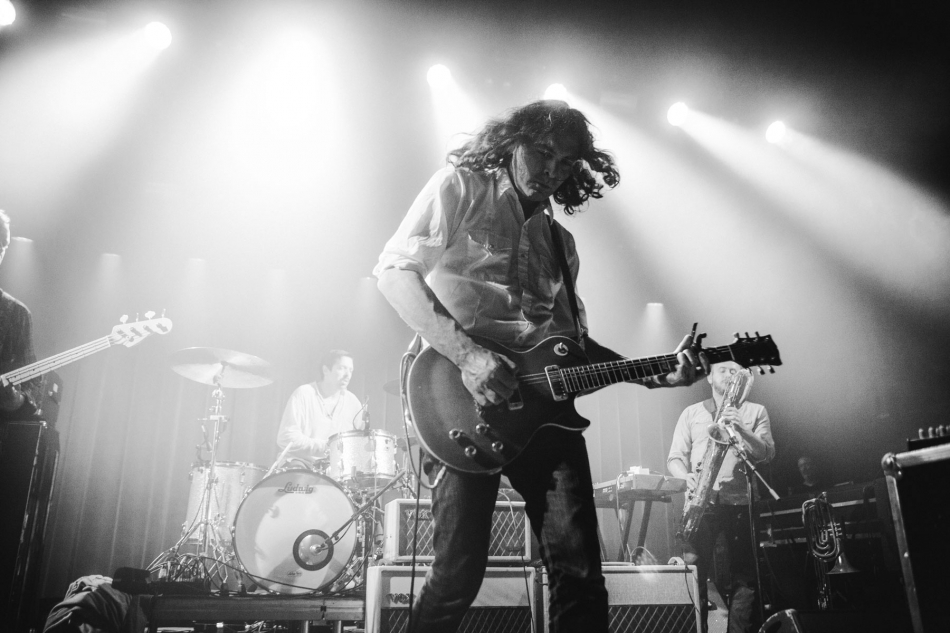 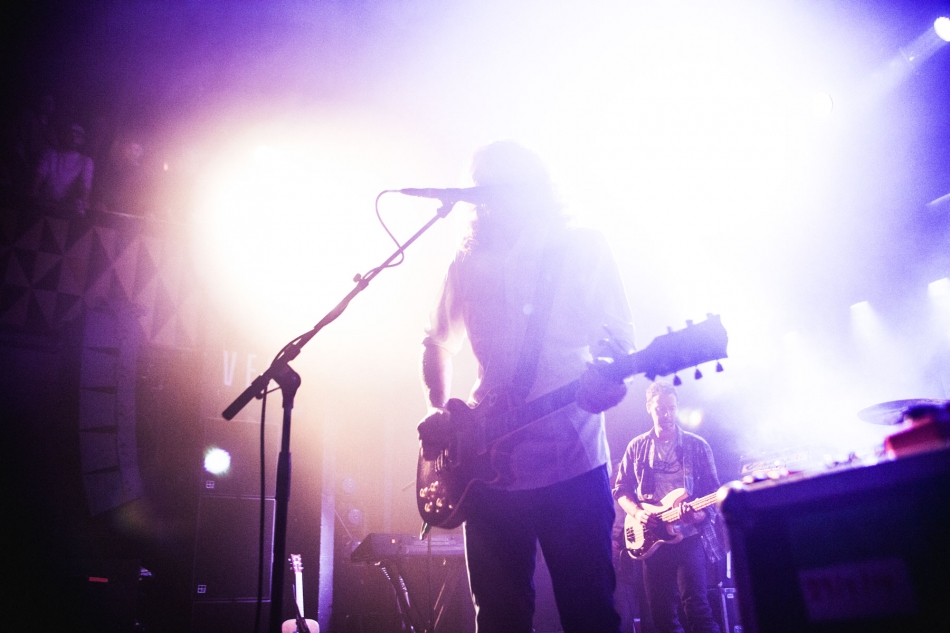 Ønskeøen has just released a new video for ‘Sleeping Is Free’. The Copenhagen based band was formed last year at Musik I Lejet and features members of Cody, The Rumour Said Fire,  From Sarah, and Sleep Party People. The video was made by Brian Batz of Sleep Party People.

Swans – To Be Kind After thirteen studio albums, Swans have not diluted their power or talent one bit.
It has been a busy year for Here Today. During 2014 our photographers and journalists covered Roskilde Festival, Northside Festival, Trailerpark
Earlier this month we had the pleasure to premiere RA ‘Prism (Trentemøller remix)’ from their latest EP

On a damp Wednesday morning at the Swedish embassy in Copenhagen, we meet up with Danish and Swedish artists Kill J and Linnea Henriksson (respectively), along with string quartet Vindla. Each artist are set to perform solo with Vindla, who play together as a quartet with various acts, also covering popular music tracks, in the warm up they treat the audience to a rendition of Michael Jackson’s “Billie Jean” before Kill J and Linnea Henriksson step onstage to give spine tingling versions of their tracks “Bullet” (Kill J) and “Halmstad” (Linnea Henriksson).

Jónsi (Sígur Rós) has shared a new track “Where No One Goes” from animated movie soundtrack How To Train Your Dragon 2.

Listen to “Where No One Goes” below:

Robyn & Röyksopp have shared a new video for their single “Sayit” via H&M’s YouTube channel from their mini-album Do It Again, released May 26th on Cherrytree/Interscope. The video was directed by Sandberg & Timonen and Kacper Kasprzyk and features Robyn & Röyksopp in the Do It Again outfits along with a dog mouthing the lyrics to the track.

Watch the video for “Sayit” below:

As the sun shines and gives us respite from a day of chill and damp, Aldous Harding
Earlier this month we had the pleasure to premiere RA ‘Prism (Trentemøller remix)’ from their latest EP
Premiere on RA - 'Prism' (Trentemøller remix), the first single from RA's latest release Remixes.

If Ideal Bar is feeling a little too chill and empty for a gig on a Saturday evening, Ratking make it their business to get the room working for them. The New York hip hop-trio—MCs Wiki and Hak, and producer Sporting Life (which, until proven wrong, I insist is a Gershwin reference)—are touring Europe, promoting their debut album, So It Goes. On record they sound punchy and fresh, full of strange samples and clever wordplay, and feature guest-spots from the likes of King Krule.

This being an often tricky genre to pull off live, and with contemporaneous gigs going on in both Vega’s larger venues, it’s impressive to see Wiki and Hak scrap together a good crowd out of the initially scattered audience. Right from the beginning you can observe their dynamics, the way Hak will gentle coerce people at the back to stand up, while Wiki positively vibrates at the other side of the stage, tensed for the hook to hit. Ratking work by feeding off each other’s differences: Wiki’s exuberance and aggression, Hak’s laid-back reserve, Sporting Life’s obvious intensity and focus. The scruffiness of the sound ends up making them more endearing, three punky kids elated to be playing around the world. 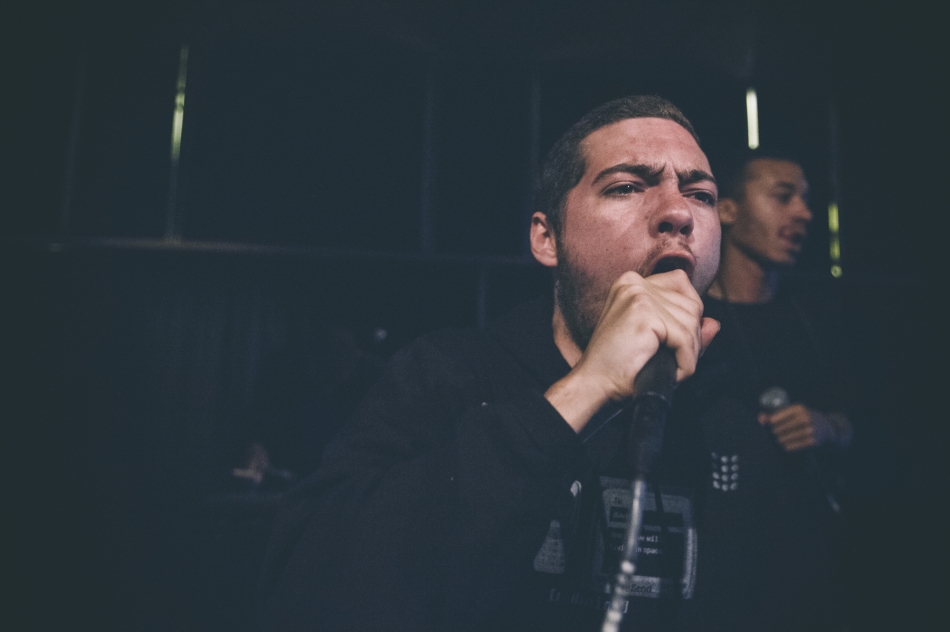 Tracks like “Snow Beach” are great to pick apart, layers upon layers of tropicalia, shoegaze wash and cheap drum samples. It almost sounds like an Animal Collective remix, until a saxophone appears from nowhere. And the lyrics are grounded, explorations of New York, utterly devoid of obnoxious posturing. The sound is that of a thoroughly internet-immersed generation (the names Wiki and Hak should make that clear enough), for whom genres are nothing more than tags on last.fm, rather than the rigid, tribal boundaries they once were.

It’s a short set, the length you might expect from a hardcore act, but Ratking release us back into the streets of Copenhagen vibrating at a slightly higher pitch, somehow a little less cynical. 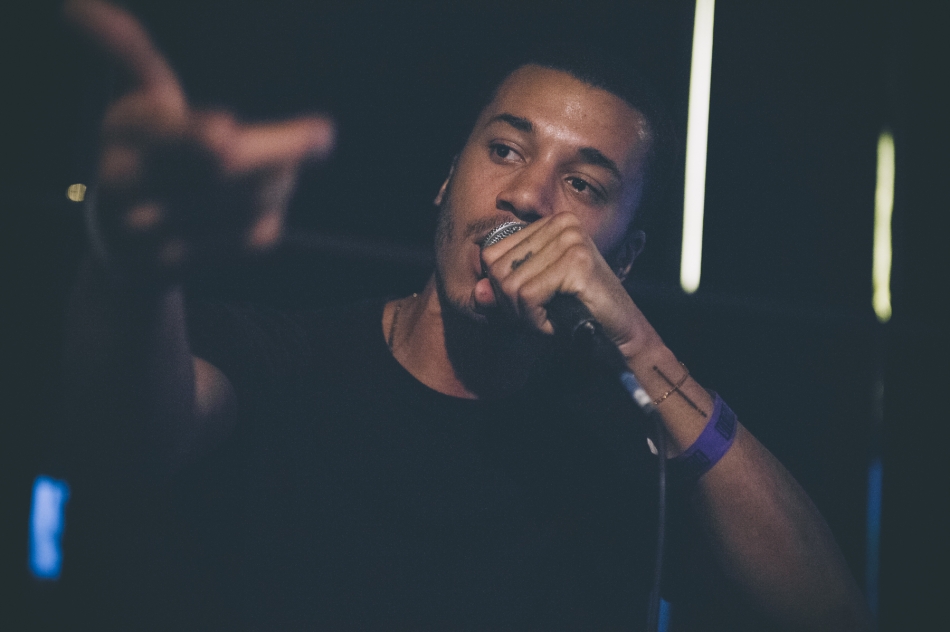 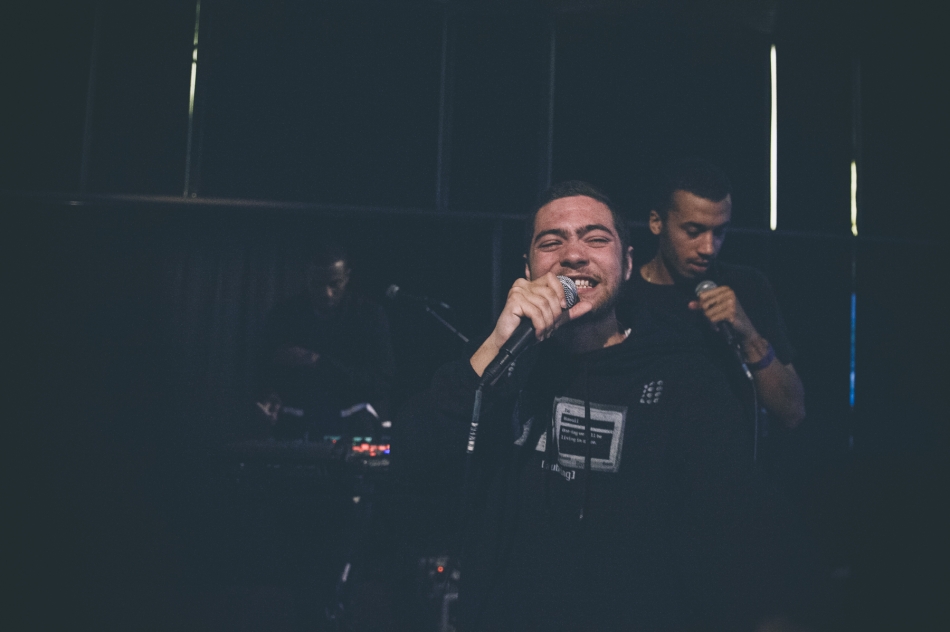 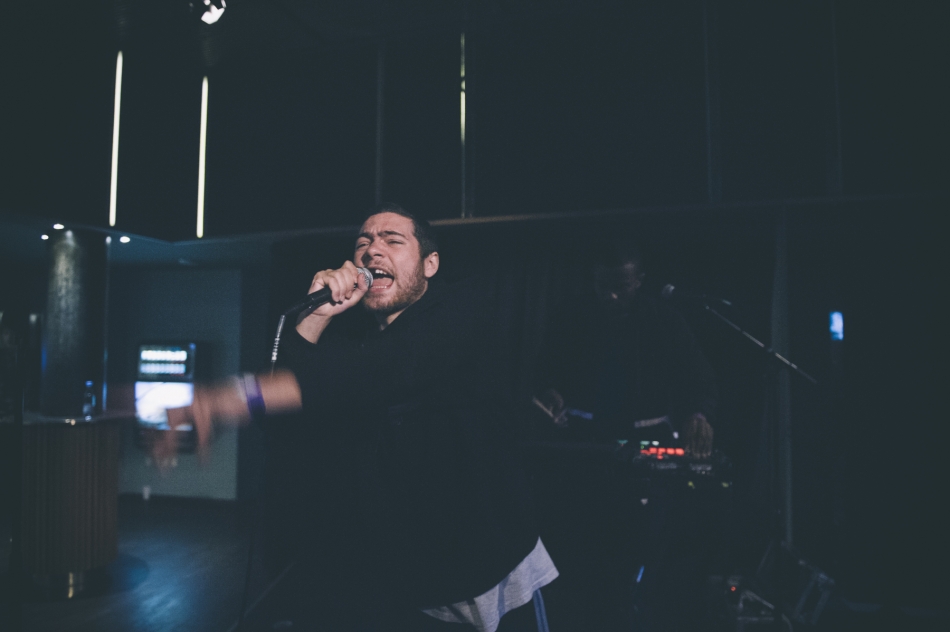 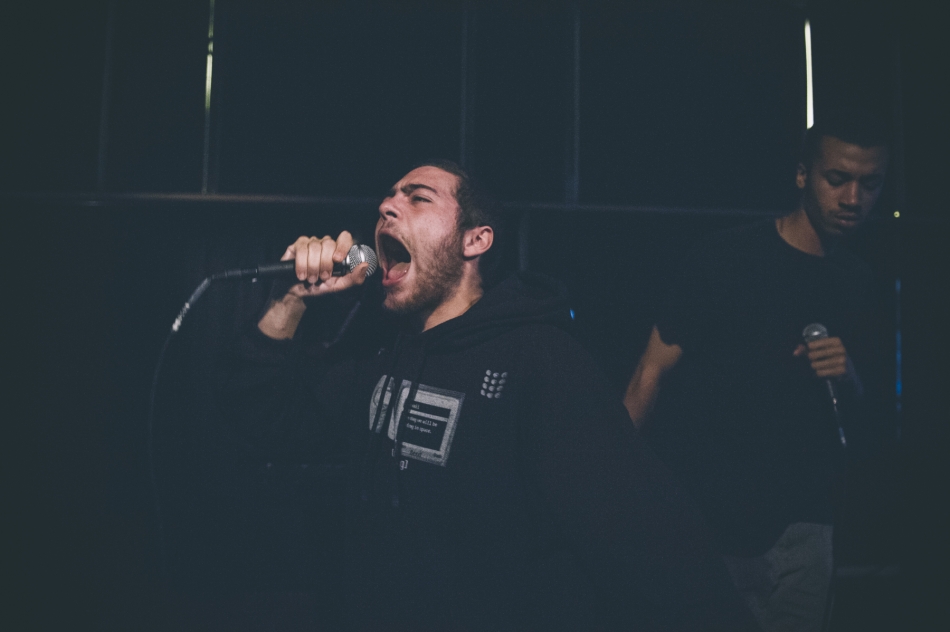 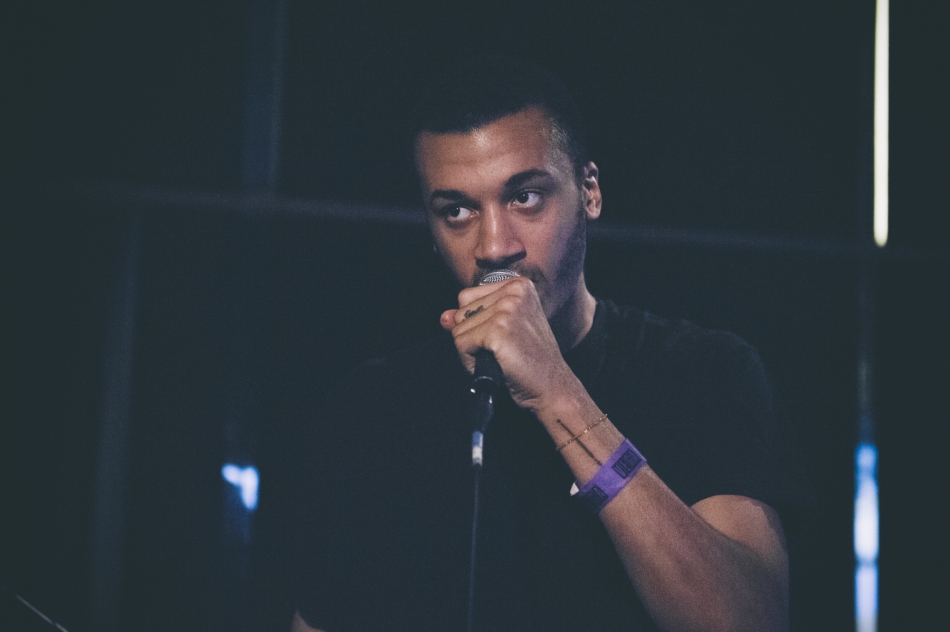 Bob Hund Communions Ratking Noel Gallagher The War On Drugs Father John Misty St Vincent Foxygen Perfume
Photos by Morten Aagaard Krogh (mortenkrogh.com) and Tom Spray (tom-spray.com) Bob Hund Communions Off! Ratking Noel Gallagher
Roskilde 2015 is gearing up, and as half of the population of Copenhagen migrates towards the festival
1 2 3 Next
Go to Top