Low frequency sounds and thunderous bass aren’t always associated with relaxation, but Anna von Hausswolff’s sold out Jazzhouse performance could have been billed that way. From the beginning of opener Berg’s set, the evening was one filled with a resonance humming mildly in the air, lulling the audience into a meditative state (though Berg might have taken it too far by burning patchouli incense on stage).

But it’s not a smooth transition to Anna’s set. She takes the stage with her band in an unassuming way, situated on a platform, sitting behind her organ, far removed from anyone in the audience. This means that when she crouches behind the instrument, we can’t see what she’s doing. And it seems like she’s ducked down for a long while when she finally announces that her sub-bass has blown out, and she’ll be back in about 10 minutes, leaving us with a light drone.

True to her word, it is only 10 minutes, standing in pulsating blue lights that remind you of being in an aquarium. While the glitch has robbed Anna of any bold introduction, the now-repaired sub-bass has the shock value of making your teeth rattle in your head. Despite this, it’s very soothing. Because there is so much emphasis on the lower end, the guitars are a whispery afterthought; the myriad pedals before the two guitarist contribute nothing to noise.

Anna herself can shriek like a banshee, but it blends so easily with the arrangements that, regardless of her pitch, there’s no harshness. And the way that she sways — in big swooping motions with her hair trailing behind her — suggests a different atmosphere and a different music, a playfulness and nonchalance out of step with the avant garde.

Given the technical delay, this is one night when the perfunctory leave-the-stage-to-denote-an-encore could have been skipped. Von Hausswolff returns very quickly for a solo performance of David Bowie’s “Warszawa” before her band rejoins her for the final number. It’s an up-beat, almost pop number, different from the rest of the evening that she closes her set with. It’s past midnight, and there’s an air of fatigue in the room now, but it’s a wise decision to send us off with one last burst of brightness.

It’s hard to know what to expect of a Laibach show, even halfway through a Laibach show. Despite over 30 years as a band, they are a group whose reputation has surpassed their work and music, who are synonymous with fascist satire and singer Milan Fras’s strange headwear. Their performance at DR Koncerthuset was more minimalist than expected, and grandiose because of the pageantry managed with such a barebones set up. 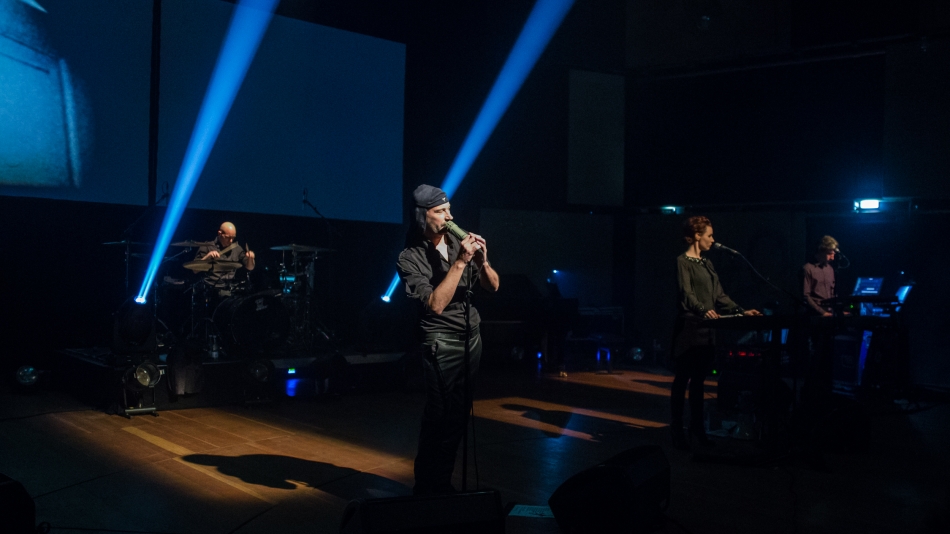 The focus of the drama is obviously Fras and his voice that sounds more than anything akin to Tuvan throat singing, especially when contrasted so extremely with Mina Špiler’s soprano. It’s in their movements: standing stock still when not singing, holding out their arms when they are singing like church choir directors, or the drummer crashing cymbals together with huge flourishes.

The first half is sweeping, slightly spacey ambient electronic, splintered by the vocal pairing. It’s unexpected when it’s interrupted by a fifteen-minute intermission that leads to, in the words of their pre-recorded voice over, something completely different. Let’s hand this over to John Oliver for a moment:

It was an overstatement to bill the night as “Laibach play The Sound of Music,” as the posters did, when this was limited to four songs. And it was a little predictable that they were all arranged as Špiler accompanied by a piano before synth, drums, and Fras joining in (with the exception of “My Favorite Things,” which Fras sang alone while the items he describes in the song flashed on the screen behind him in the most consumerist manner possible).

But then things shift back from this strange diversion — as it really can only be thought of, whether or not it was what was advertised — to Laibach’s own work. Though a song like “the Whistleblowers” could fit in just as easily as a weird showtune (in the context of what we’ve just seen), there’s still the feeling that we’ve shifted to somewhere else yet again. Not ambient, not militaristic, not overtly satirical, and the most fascinating part is, if this kept going all evening, surely the tone would continue to change. 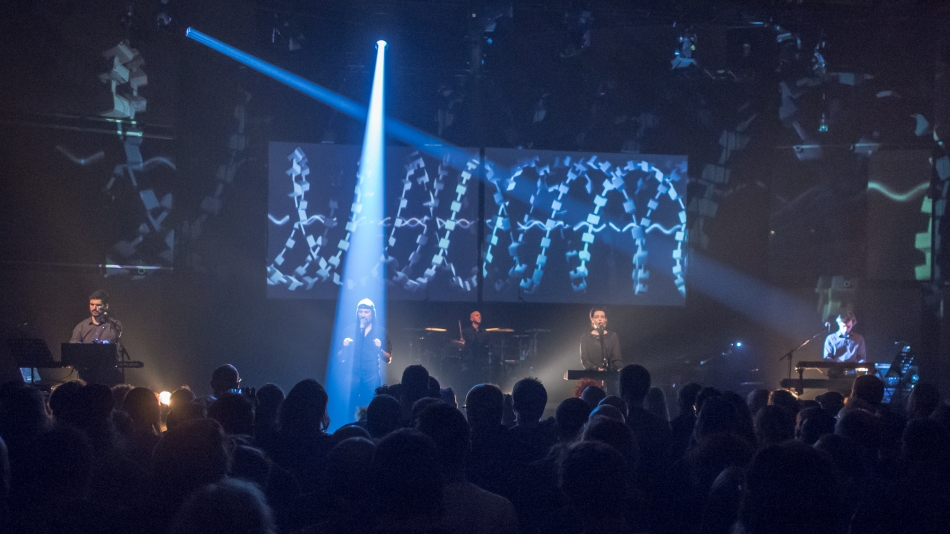 After the encore, and before people can quite get through the studio doors, the John Oliver clip flashes up on the screen. It’s intercut with the band presumably in North Korea, and the suggestion that maybe their trip didn’t go especially well. But we’ll find out soon; the documentary will be out later this year.

First Hate are ready with the long awaited follow up to 2014’s self-titled debut EP. Today (January 14th), it was announced that they’ve signed to Copenhagen label Escho and will release their second EP ‘The Mind Of A Gemini‘ on March 4th 2016. As one of the most hyped acts of 2015 was a busy year for the band touring Europe with Iceage, summer saw them play a number of festivals and they finished off the year with their own European headlining tour. Now they’re back with what has to be one of the most anticipated records of 2016. They’ll be back playing live at the beginning of March playing Lille Vega, Copenhagen (04.03) and Tape, Aarhus (05.03).

Get tickets for the Lille Vega show HERE

‘The Mind Of A Gemini‘ tracklisting: