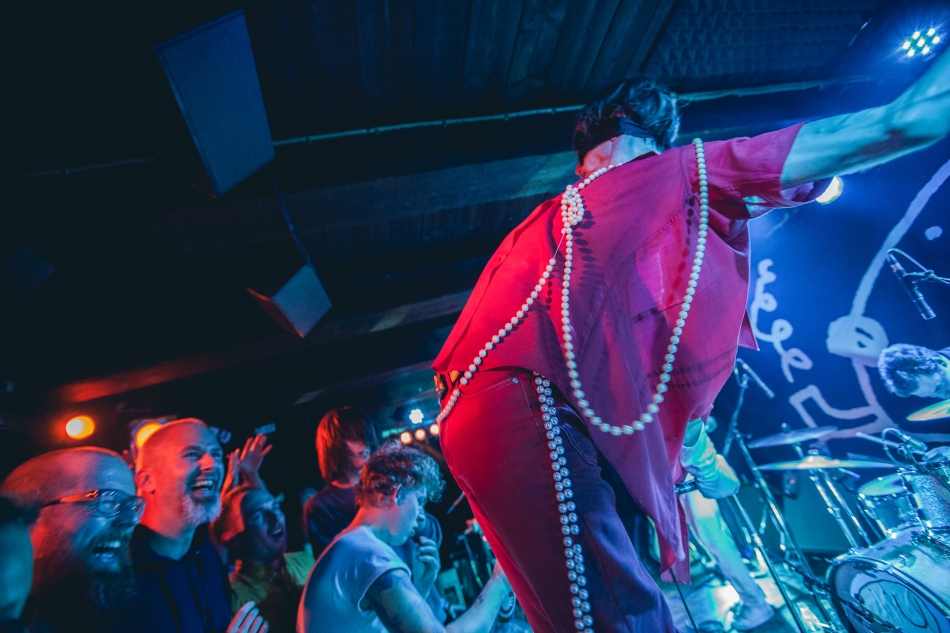 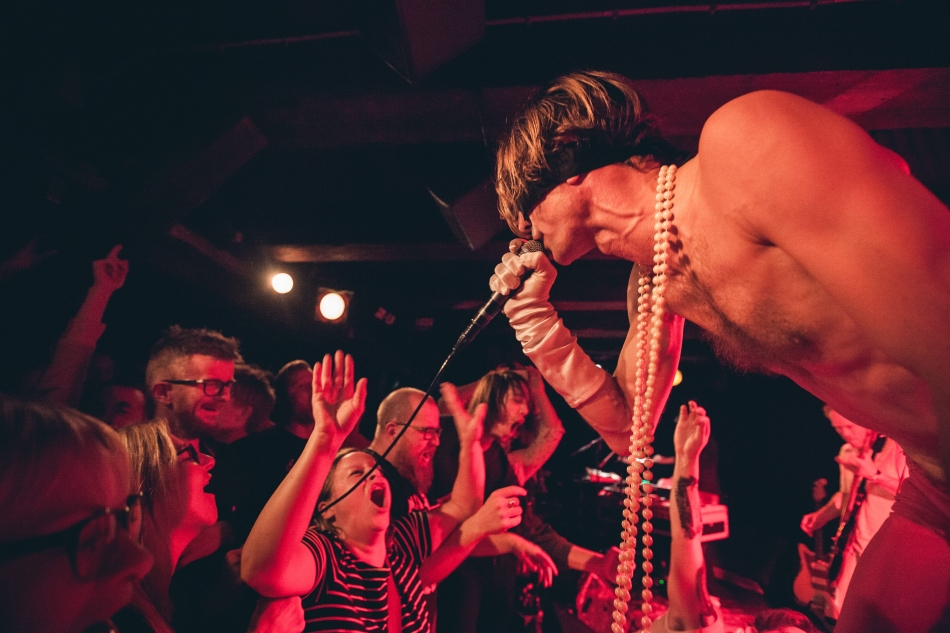 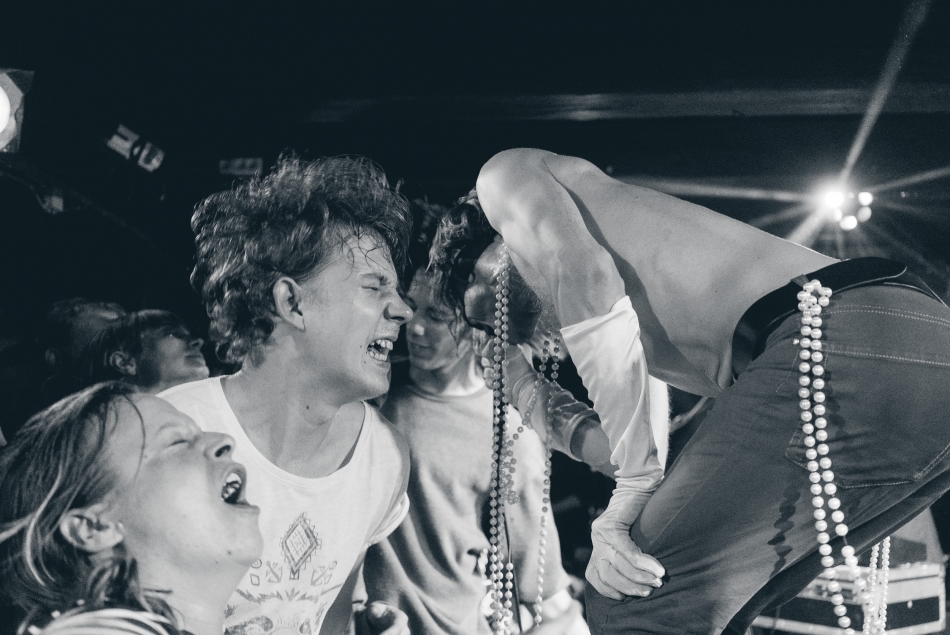 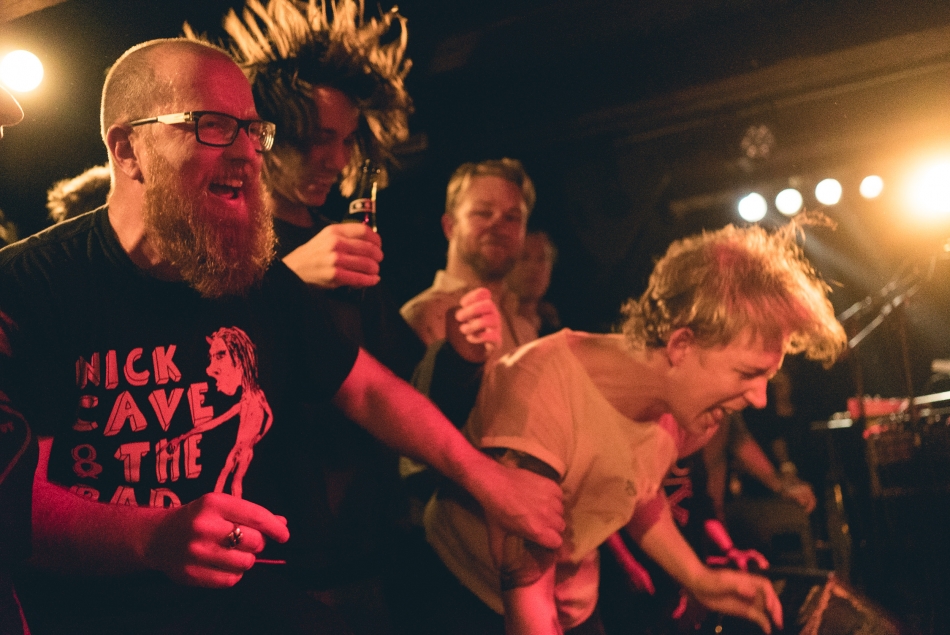 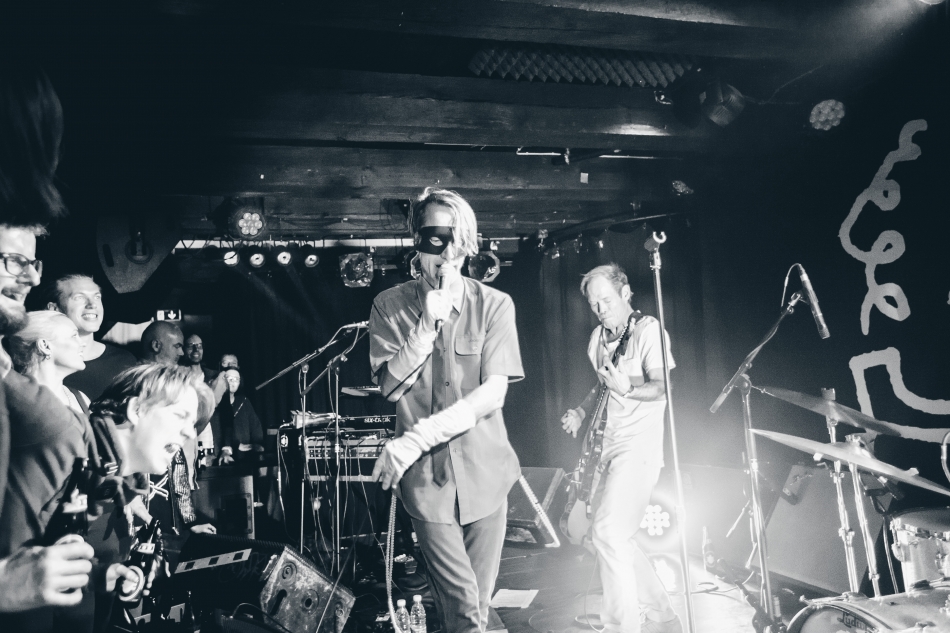 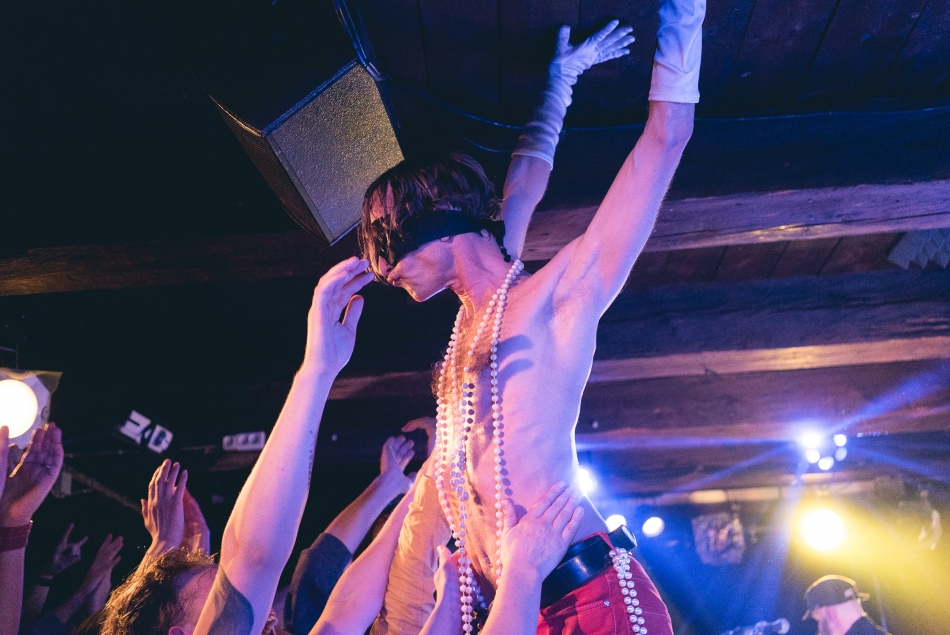 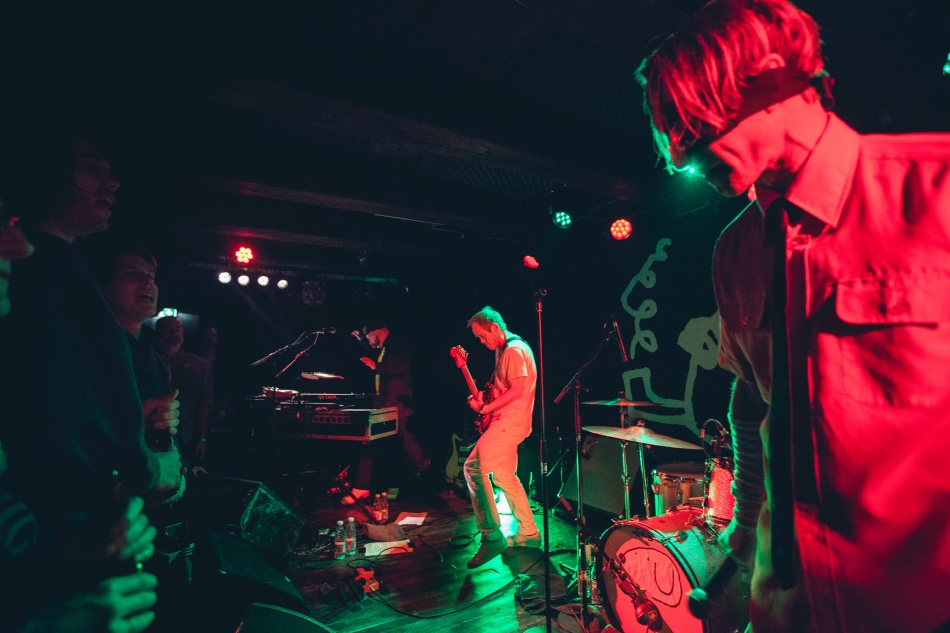 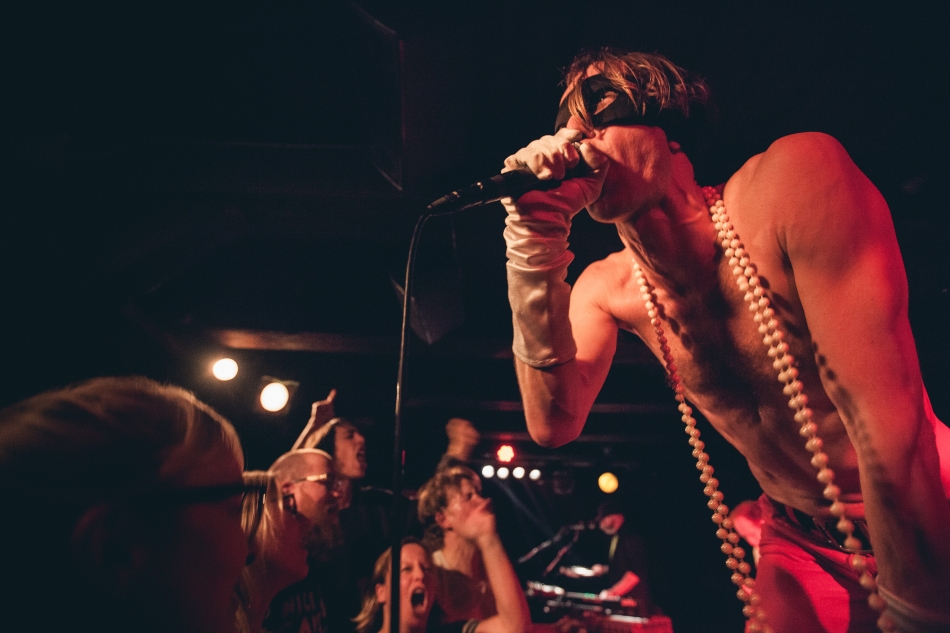 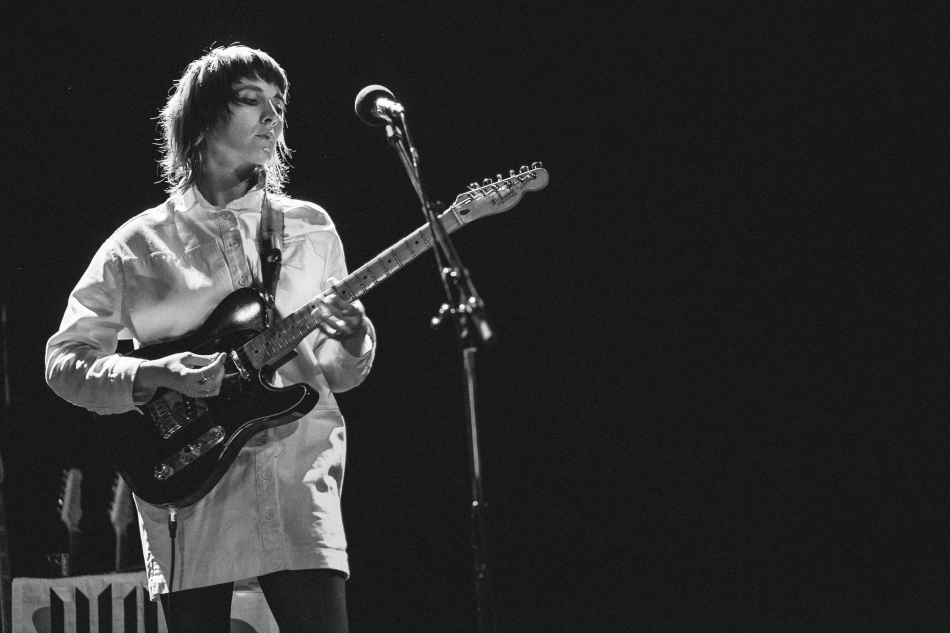 Behind iridescent projections of cityscapes stands a still figure with a guitar and cowboy hat. Dressed in gear that could have been purloined from Gram Parsons’ wardrobe, Jackie Lynn might be looking out into the candle-lit tables of Jazzhouse with a slight nod of approval. Hers is very intentionally loner, dive-bar music, a hybrid of lumpen proletariat country and Suicide-esque electronic minimalism.

We should be more precise: Jackie Lynn is in fact the avatar of singer-songwriter Haley Fohr, until recently best known for her doom-laden folk act, Circuits des Yeux. There is still plenty of darkness to Jackie Lynn, and Fohr’s distinctive low vibrato cannot be masked, but there is also an unmistakable playfulness to the very concept of this project. Accompanied by a carpet of lofi drum machines and bleepy synths, provided by members of the gloriously-named Bitchin Bajas, Jackie Lynn strums her guitar and tells her tale of love, coke dealing, and “jocks and their tiny cocks.”

For what sounds like a conceptually overwrought mix of country and electronics, the Jackie Lynn project manages to sound perfectly natural, a glimpse of an alternate world, a micro-culture just barely out of reach of the internet. The briefness of the album, under half an hour, adds to the mystery, but the real power of Fohr’s persona is felt when she is there before you, almost, but not quite, accessible.

Not too long ago, ‘being a fan of ambient music’ would be classified at around 7.8 on the Social Dysfunction scale, just below ‘owning seven cats and two human skulls’, or ‘commenting on news websites’. But these days ambient is rougher, darker, and louder than its predecessors. If it looks to Brian Eno at all, it is the twisted Eno that makes up much of Adam Curtis’s soundtracks, rather than the one who composes lullabies for air passengers. Ambient is also, it would appear, much more popular now. At least enough that one of its main ambassadors, Tim Hecker, can quickly sell out a medium-sized venue like Jazzhouse.

Not that this is all Hecker’s doing. The evening is a double bill with an altogether more eclectic character, Tyondai Braxton. Formerly of Battles, Braxton is the cerebral experimenter to Hecker’s romanticism. The difference is as much visual as it is audible: the projections behind Braxton glitch and fragment, the everyday nightmare visions of garbled technologies; Tim Hecker is instead surrounded by rather ecclesiastical rows of pastel-coloured LEDs.

But for all their care in creating compelling visuals to reflect their music, both acts appear to inherently question the need for us as an audience to be standing like this, all facing the stage as if expecting interaction or entertainment. The intermingling tracks from Hecker’s latest LP, Love Streams, positively pour from the speakers, reverberating through bodies and rattling the fillings of teeth. You’d do as well to swim through this than absorb it standing. It is the much-discussed vocal elements of Hecker’s recent work that add a little light to what would otherwise be an unremitting textural piece, and perhaps he is aware enough of the side effects to cut things short: after a pedantically-precise 60 minutes, the lights go up, and those of us who forgot our earplugs began to regret our life choices.

Lille Vega is a nice venue: It’s a comfortable size, the sound is decent, and the décor is at the least completely inoffensive. According to Holly Golightly, the venue is also quite “grown up.” It’s hard to say exactly what she means by that — perhaps she’s never outgrown her scrappy punk years with Thee Headcoatees — but it’s a term she comes back to again and again.

It’s a positivity that comes in handy when the room is only about a third full. And it’s reflected back from the crowd; though blues and country-inspired rock songs aren’t the most obvious songs to dance to, people are dancing (or “jigging around,” as Holly prefers). But because there are so few people in the room, there’s plenty of space for it, and it’s nice to see couples busting out the moves they learned in that one dance class they took together when they first started dating.

At times the evening has the feeling of an elaborate pub gig, not least because Holly has spent most of the last 15 years subtly shifting through different, adjacent genres. And through the evening her songs traverse predominantly blues tracks into Americana and, on the stripped down “My Love Is,” a bossa nova-flecked jazz. Though Holly has long since stepped away from her noisy, garage rock beginnings, there i still a girlish, cheeky quality to her vocals, and she is adept at choosing styles that suit her voice.

And given that these styles are less raucous than her earliest projects, it’s a bit surprising when, late in the evening, she once again cites the grown-up nature of Vega and says,“Usually people are throwing things by now.” It’s possible that Copenhageners are especially polite, or it could be that the fight doesn’t go out of a performer just because she turns the volume down.