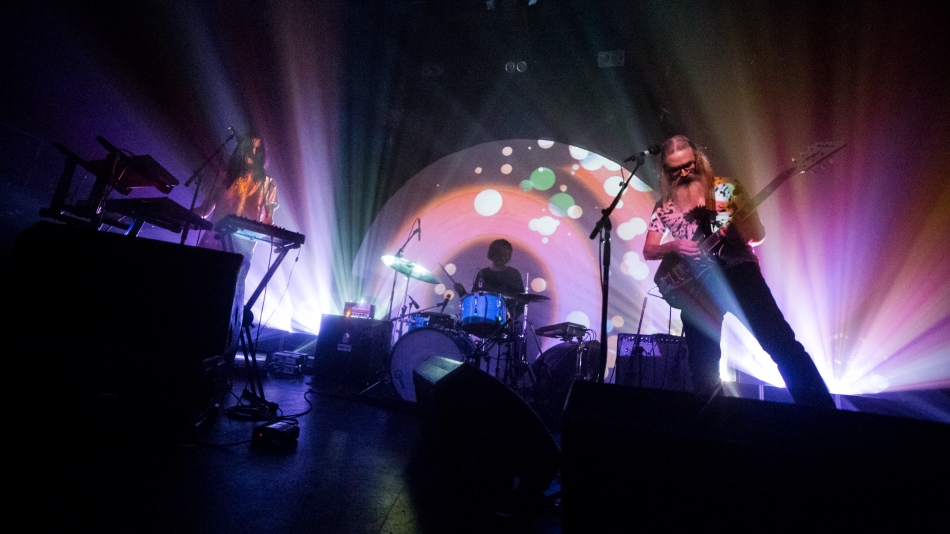 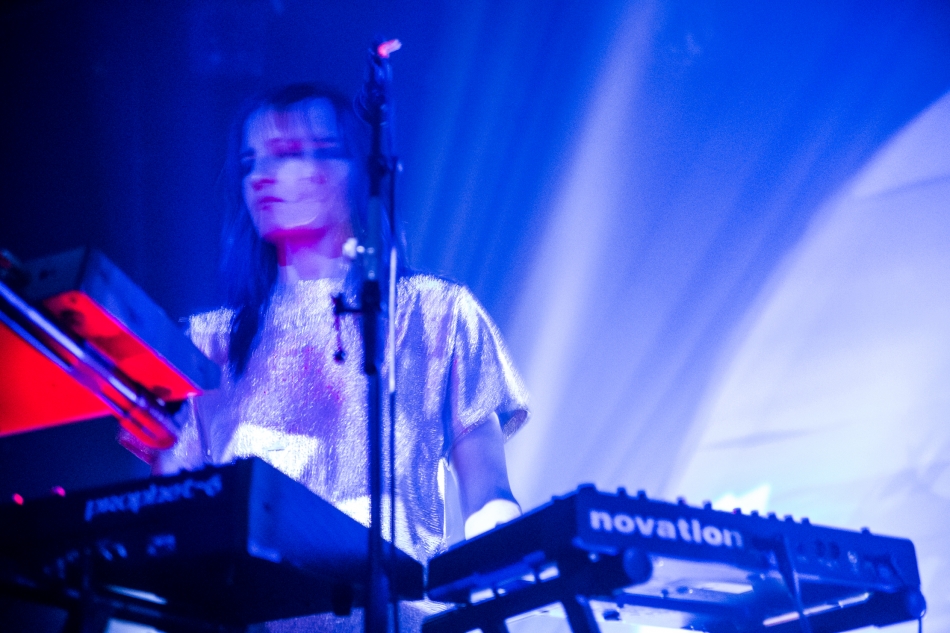 The Black Heart Procession broke a three-year silence to mount a modest European tour celebrating 20 years since recording their debut album, the pre-search engine era 1. If you didn’t know this going into their set at Jazzhouse, then you didn’t find out until after they had made it through the album and were into the encore. They’re not a band to make a fuss or really chat all that much between songs.

Opener Sam Coomes, touring his debut solo album, brought a glitchier version of his work with Quasi. Perched on an amp in lieu of a piano bench, he’s got an analogue drum machine, loads of twiddly knobs to twist between songs, a stuffed vulture mounted on his mic stand, a rotating mannequin head with LED eyes, and more pedals underfoot than seems logistically reasonable — including an air synth, which effectively acts as a theremin he can operate with his foot. It’s more visually stimulating than you’d expect a guy at a keyboard to be.

It’s not a competition for obscure objects to trot out during the show, but the Black Heart Procession begin their set with frontman Pall Jenkins playing a saw. And while it’s a neat party trick, it’s also a detail that demonstrates why 1 has aged so well in 20 years. The current line-up of the band, augmented by accordion and violin as well as drums and synths, is mostly built around organic arrangements not subject to technology’s fads or evolution. It also emphasizes the band’s range of dynamics in a way that is lost on their albums: Everything on the recording always sounds very mellow and delicate, and it’s surprising just how loud a song like “Release My Heart” can be.

The encore is less orchestrated: “A Cry for Love” (because it’s curiously popular on YouTube), “The War is Over,” and the treat of an unnamed new song. The new song is introduced with a brief speech from Pall, who explains that the song is about borders and refugees and how the rhetoric in the US is uncomfortable for two guys who grew up near the Mexican border. And while the Black Heart Procession doesn’t seem like the sort of band to get political, the new song is undoubtedly one of theirs. If this marks a new direction, it won’t take fans far off course.

It’s an interesting choice for an artist, especially an established artist, to start a show with a cover of someone else’s song. That Emmy the Great chose to start her gig at Ideal Bar with the Cranberries’ “Dreams” in Cantonese was an interesting artistic move, a moment for everyone who recognized the tune to feel clever, and a talking point about how the hallmark of a song’s popularity in Hong Kong is the number of Chinese cover versions of it (apparently there’s a techno one of “My Heart Will Go On” that we should all either seek out or avoid like the plague).

It’s a quirky but competent beginning, one that sets the tone for Emmy (née Emma-Lee Moss) to tell stories about songs and a childhood in Hong Kong. She’s alone on stage with her guitar and a pocket-sized synth set-up, but clearly comfortable with chatting about herself in a way that’s self-deprecatingly charming, at telling you little facts about songs that meander just the right amount.

In this solo set up, it’s interesting to see how much her style has changed from her debut album, First Love — written primarily for solo acoustic guitars at a time when everyone was drooling over Bon Iver and plotting to move to a cabin in the woods. Her work since then has come with more complete band arrangements, relying less on finger-picking, and when it’s played by her solo, it’s in a stripped back form. It’s clear that she has given thought to how she would perform them — even the requests she takes from the audience (she can only play half of them — one fellow is particularly bad about choosing songs she can remember).

The evening is best represented by Moss’s latest single, “Mahal Kita,” an upbeat pop song about foreign domestic workers in Hong Kong. It’s a final look at the personal history she’s shared all evening and how it radiates beyond her. It looks beyond the exploitation of workers and focuses on what they do to reclaim their senses of self. Moss is marking out a next phase, beyond the super-personal songs, beyond just guitars, toward something ever more ambitious.

It is a confessedly jet-lagged Hamilton Leithauser and band that take the stage at Lille Vega, but as a performer who seems to revel in a certain rootsy journeyman-musician persona, this could turn out to be an asset for him. His latest album, I Had a Dream That You Were Mine, a collaborative effort with ex-Vampire Weekender Rostam Batmanglij (present tonight in spirit only), reached a fair few ‘Best of’ lists last year, confirming Leithauser as more than simply the frontman of The Walkmen.

Judging by the impassioned singalongs in the front rows this evening, a good portion of the audience is here on the strengths of the solo work alone, and might not even be familiar with the band that gave us the perennial indie club night banger “The Rat”. The wiry texture of those Walkmen records is softened in Leithauser’s later work, which replaces their ironised distancing with more direct romanticism.

The energy this evening comes mostly from that voice, the pained howl that somehow manages to modulate into a croon or a Dylanesque sneer. The tension generated by that upwards strain can be thrilling, although perhaps an hour is just about the limit at which it can sustained. In fact my earlier characterisation is incorrect: you don’t, in fact can’t, really sing along with Hamilton Leithauser, even if you know all the words, at most you sing beneath him.