It’s only eight months since we saw Amalie Bruun’s debut performance as Myrkur at Roskilde, which was notable for its fanfare and how much attention was drawn to it being a debut. But her performance at Amager Bio has a lower key, hometown vibe to it. There’s a Danish flag draped on the drum kit (we assume in a charming, celebratory way and not a nationalistic way like black metal bands from other countries might) and Solbrud’s Ole Luk comes out for a song.

Bruun herself is sticking to her evil sprite character, emphasizing her haunting voice whether paired against a piano or heavily distorted guitars. She does have her metal moments — the shifts in drum fills, the separate, effects-laden microphone — but she’s best described as a hard rock act with particularly pretty vocals. 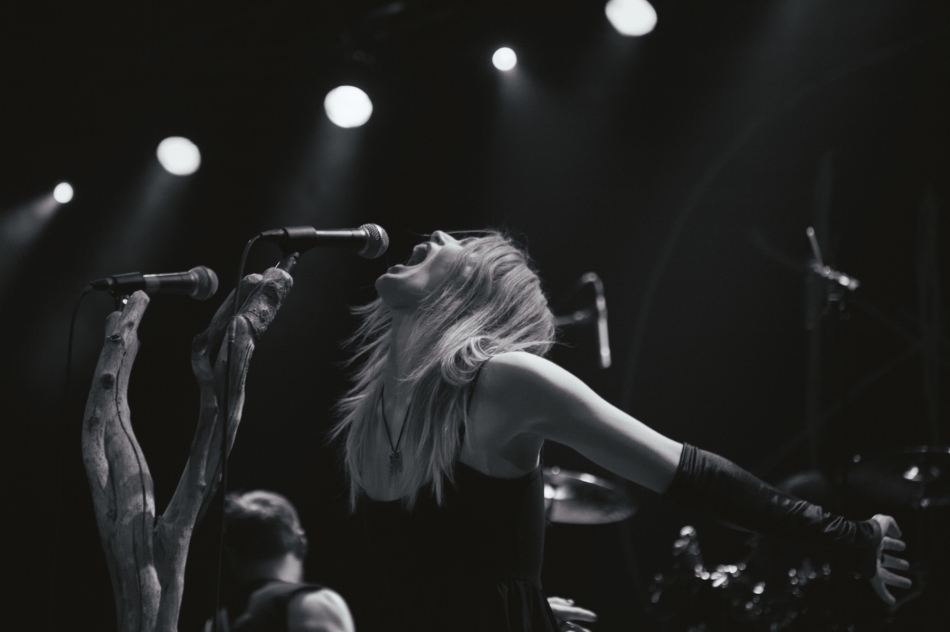 Compared to Myrkur, who plays up the pretty aspects of her music, Deafheaven actively work to hide the fact that their music can be quite pretty. In their quieter moments, you could be forgiven for thinking they’re an indie rock band, so strongly do their shoegaze influences come through, and even though singer George Clarke is shifting and stalking like a caged animal. You can’t fault him for energy, though it’s clear that he doesn’t always know what to do with it. He beckons fans to come closer, though no one tries to climb up on stage.

It’s really a rather curiously polite crowd considering the music and considering the singer’s own thrashing energy. It’s not until the encore, “Sunbathers,” that there’s any semblance of a mosh pit. But then the artier impulses of Deafheaven play to this; their new album, New Bermuda, follows a less predictable song structure than their previous work. It’s difficult to mosh when the aggression suddenly falls out the bottom of a song. But this decreasing predictability also makes them as exciting a live act as any of Clarke’s thrashing.