After the opening salvo from her masked backing band, Gaye Su Akyol arrives on stage in an iridescent cape and a mission: “We have come from Istanbul to bring you peace, love and rock and roll!” A bold statement, but amply backed up by the mix of surf, garage punk and Turkish psychedelia that they produce. The first track from her latest album, both titled İstikrarlı Hayal Hakikattir, starts with a 50s horror themed synth riff, before deploying the signature guitar sound: a mix of Dick Dale and traditional Turkish bağlama, punching straight through each song.

Of course Gaye Su Akyol herself commands most of the attention, with the psychedelic theatrics that recall her earlier career as a painter, and of course her gravelly voice, equally sultry and defiant. The venue is packed out and the bilingual stage patter gets whoops of approval as Gaye introduces both her own songs and cover versions of Turkish hits from the 70s.

Beyond the capes, masks and fun, there is also a strong political element to Gaye Su Akyol, who talks about having to pay a visit to a police station because of one of her songs. In recent years classic Turkish psychedelic rock has begun to become more widely known in the world, thanks to its commanding combination of funk and hard rock infused rhythms with woozy synths and vocal melodrama, but tonight Gaye underlines the political and social context of these, drawing evident parallels with the present. 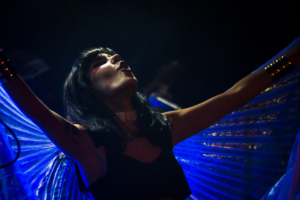 Its especially helpful to learn some of the context of her work, as otherwise the rather bewitching nature of this music can quickly have you imagining some abstract version of Turkey in which Anatolian shepherds have been playing Black Sabbath and Parliament Funkadelic on their saz since the stone age. It’s a fun thought, but it doesn’t do justice to the richness of the musical and cultural traditions from which Gaye Su Akyol draws her material.