Whenever artists make an off-kilter record, it’s always exciting and a little nerve-wracking to see how they will perform it. In the case of Jenny Hval, whose latest album, Apocalypse, Girl, combines spoken word with muted electronics and some odd-ball pop songs, there are any number of ways her performance at Jazzhouse could go wrong.

The show, however, is far beyond a concert and more along the lines of performance art. It’s pure entertainment, the kind you recommend and don’t worry about whether or not other people will find it strange. [inlinetweet prefix=”null” tweeter=”null” suffix=”via @heretodaydk”]You’d have to be completely joyless not to find humor in Hval’s avant garde fly girls[/inlinetweet], who play with an iPad that projects onto a screen on stage, or gyrate in the shadows of a backlit screen, or momentarily take over to sing a karaoke version of Britney Spears’ “I’m Not a Girl.”

Hval herself angles for subtler performance, wearing a reddish wig for no apparent reason, allowing herself to be jostled by the fly girls, and pausing slightly longer during “Kingsize” when she declares “I am one-fourth Danish,” to allow the crowd to cheer (which they do). 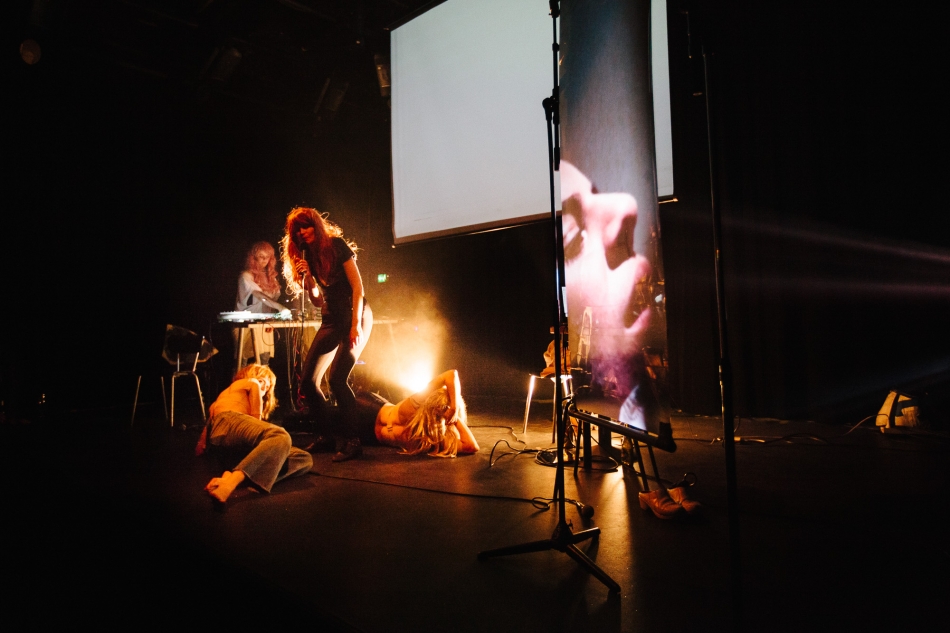 Hval never seems to exert herself when she sings; no matter how far she stretches her voice or her range, her body is languid, lax, her posture somewhat lazy. She balances this nicely with projections of a woman smoking, sped up just enough to make it twitchy whereas Hval is anything but.

The visual aspect of the set is a tremendous counter to the fact that the music side of the performance doesn’t differ at all from the recordings. But you could never argue that you haven’t been given a real treat. For how casual the evening feels, it’s clearly choreographed down to the wigs being pulled off at the end of “The Battle is Over.” Hval has to apologize to the crowd that there won’t be an encore, that they haven’t prepared one. And after the spectacle of the last hour, it’s better that she walks away than offers anything less.