People who come to see Tori Amos play in 2017 know her well. It is not only the type of environment where you hear people talking about how many times they’ve seen her before, but one where you hear talk of what time their flight got into Copenhagen that morning so that they could be at the show.

Concerts by veteran artists in venues the scale of DR’s Koncertsalen give the impression that it isn’t possible to be a casual fan. The people there don’t just want to hear the new album and the early stuff; it’s a space where the person shouting for the obscure B-side from the ‘90s has a good chance of being indulged.

Amos understands her role. She scurries to the front of the stage in sky-high heels to greet people before taking her place sandwiched between her grand piano and three keyboards neatly stacked on top of each other. It’s a rare occasion to see a pop concert in this room in the round, and Amos does her best to look to the audience at the back of the stage throughout the evening (though as she shifts between her instruments — often mid song — they always see her back).

It is not an especially young crowd; it’s clear that most of the audience was introduced to Amos in their teens and have continued to see her over the years. Some are now bringing their own children with them. They are reverentially quiet through almost every song, to the effect that the man next to us goes to great lengths to hold in a sneeze. 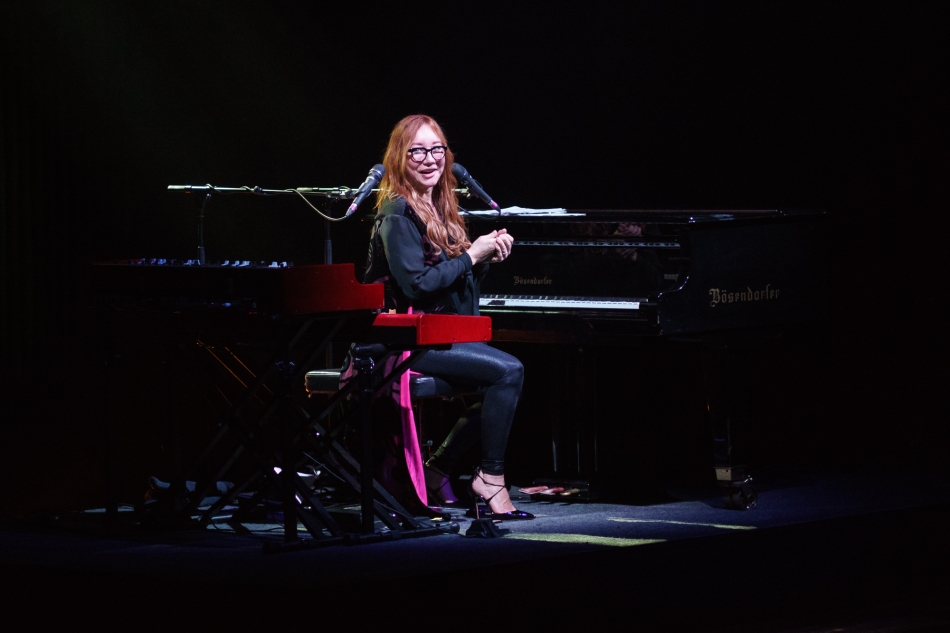 This quiet is appreciated as Amos is alone on stage. Though the occasional backing track comes in, it’s mostly just her and her pianos. This means that her set is flexible, adjusted according to reported requests that came in earlier. It also means that songs often take on a completely different feeling from their recordings, whether it’s a different arrangement or a non-linear rendition. Lyrics are reorganized, repeated, changed completely. It doesn’t make for any easy singalong, but this isn’t a singalong kind of crowd; they’re more likely to be pleased to hear something different in a song they’ve heard played before.

As the tour is meant to promote her new album, Native Invaders, the single “Reindeer King” makes an appearance, but the set is an unpredictable mix of songs from throughout her career, including non-album tracks “Ruby Through the Looking Glass” and “Garlands” that everyone still seems to know.

Amos has always been one to include covers in her set. This tradition has taken on the form an interlude which features “Fake Muse” projected onto the organ in Koncertsalen, looking suspiciously like the Fox News logo. This evening’s selections are “Let It Be” and, following an electronica reinterpretation of the intro to her song “God,” “Running Up That Hill” (Amos was surely tipped off to its frequent radio play here). These are received with the same enthusiasm as the now decades-old “Crucify” and “Winter.”

The quiet reverence comes to an end with the encore, when those in the orchestra seats squash themselves up against the stage and clap along to the backing track of “Sorta Fairytale.”

They stay put through new single, “Cloud Riders,” which, with an oblique reference to “raisin girls,” sees Amos shifting her body towards the grand piano and playing “Cornflake Girl,” picking it up from its bridge. It’s impressively timed considering the backing tracks, but the pre-recorded backing vocals are a little too loud. While Amos’ live vocals leave something to be desired for the first time this evening, the energy and borderline violence with which she plays is exhilarating. It’s a strange note to end the night on, but the sentiment in the room is that everyone is satisfied with their Strange Little Girl.