Vinicio Capossela has been a mainstay and an oddity in the Italian music scene since his first record, All’una e trentacinque circa, in the year of my birth, 1990. Borrowing from traditions as disparate as the troubadours, the folk music of southern Italy, Greek rebetiko and dixieland jazz, Capossela’s work fluctuates between the theatrical and the antiquarian, digging up old songs and embodying them in his performances.

Tonight, sitting by the piano in his captain’s hat (the first of many headwear choices) and dusty black suit with shell finishings, he looks halfway between Desire-era Dylan and an extra in a Visconti film. He’s accompanied by his “banda della Cupa”, named after his most recent release, Canzoni della cupa. 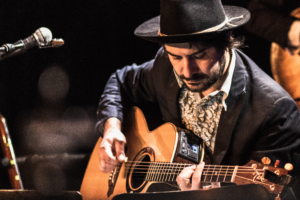 But this evening is far from limited to these songs, with a selection spanning most of the highlights of Capossela’s career. Conscious of finding himself in the land of H.C. Andersen, Capossela picks some (very literal) siren songs, the playful swing number “Pryntyl” and the more meditative “Le sirene”.

There’s a party atmosphere in Alice tonight, a semi-official meetup of Italians in Copenhagen, lots of familiar faces and loud voices. The slow numbers give way to tarantelle and more costume changes. Towards the end, with Capossela’s most famous song, “Che cossé l’amor”, it becomes a veritable singalong.

During the encore, the sweet lullaby “Il paradiso dei calzini”, you can see and hear the Italians turn to their Danish friends to amusedly explain: this is a song about lost socks. A surprisingly sad one at that, but that’s just what Capossela excels at, mixing playfulness with nostalgia, social history with theatre.