Amager Bio is close to full this evening, people travelling here from Gothenburg to witness Volcano Choir’s first gig in Denmark, and first tour in Europe. As expected at any event concerning Justin Vernon, the beards are out in force.

One of the most locally well-known beards belongs to Cody, opening tonight with a solo acoustic set. Without his six companions, his 20-minute set is squarely folk, with the easy charm of someone on home turf.

The seven-piece begin with “Tiderays”, the opener from their latest album, Repave, and already the dynamic of the band is established. Justin stands centre stage, behind a podium, a preacher largely mute in between songs. Stage banter is left to guitarist Chris Rosenau, who enthuses about Copenhagen and the audience at every opportunity. The rest of the band remains nondescript, beneath a textured backdrop that, under red lighting, appropriately mimics lava.

The band unveil two new songs, which sit at either end of the spectrum of styles and genres Volcano Choir swim in, with some post-hardcore basslines and a verse so reminiscent of Animal Collective’s “Also Frightened” that I find myself singing along to the Collective rather than the Choir. This isn’t, in and of itself, a criticism, but for every great rendition of “Acetate” or “Byegone”, there are moments when things do not completely coalesce, as if Volcano Choir are still struggling to move away from being a Vernon™ project. 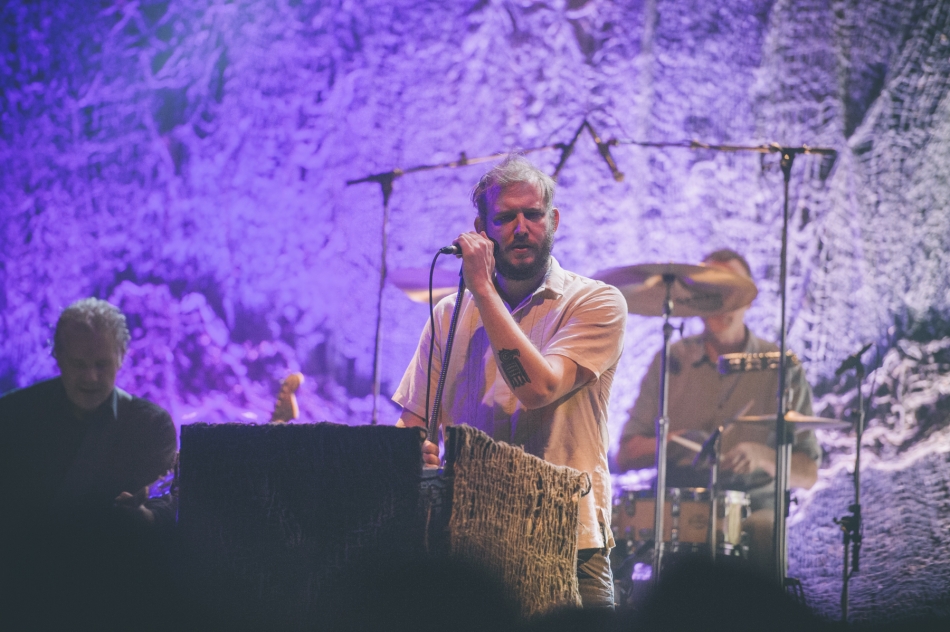 “Still”, a deconstruction of “Woods” from the band’s first album, ironically is one of the strongest demonstrations of what they are capable of as a unit. The layering of vocal samples cleverly anticipates the phrasings by a beat or two, as if to show how precise Bon Iver’s sound really is, precisely tied to specific frasings and chords. The song is also an example of Justin’s role within the live setup: not simply “lead singer”, but a musician working with the modulations of his own voice.

Whatever stylistic reservations I have, and however allergic to earnestness I may be, the intensity is undeniable, and the pulsating “Almanac” shows a band that can pretty much do and play whatever they like.