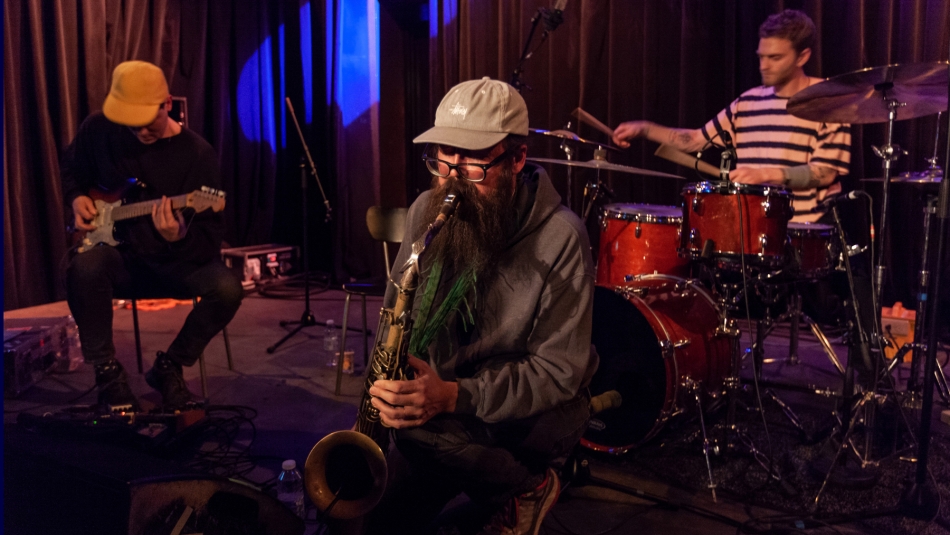 In principle, watching a guy play drums for 45 minutes doesn’t sound like it would make for the most interesting concert. But in this case, the guy is Greg Fox, a drummer you could calibrate your metronome to. We’ve been repeatedly spellbound by Fox’s contributions to Liturgy, Guardian Alien, and Ex Eye, but how would his work hold up as a solo performer?

The premise of his most recent release, September’s Gradual Progression, is that Fox used Sensory Percussion — his kit feeding into modular synths via a MIDI — to create a fully-fledged ambient work. Woven with samples of saxophone and guitar, most of the sounds he’s working with are high pitched and mechanical, but the tenor of the set lacks much of the aggression of the other projects he’s involved with.

It’s difficult to tell if or how the sensors play into his live set; to the casual eye, he could just as easily be playing along to a backing track on the laptop set up next to him. But without other band members to distract or be physically set up in his path, this was the best opportunity to appreciate his skill. Fox seems to enter a trance when he plays — his eyes are rarely open — and it’s difficult not to feel meditative in his presence. If you couldn’t see the sweat flying from his face, it would all look completely effortless.

The intimacy of the evening isn’t underscored until the encore, when Fox returns to the stage to provide more insight into his latest work. Listening to him speak without a mic closes the space in and brings a human side back to the autopilot of his playing. He introduces an “experiment” — possibly to be found on his next album — which triggers a series of bird songs among the drumming. It’s whimsical and weirdly charming and guarantees that we’ll track down whatever he works on next.

Drummer Greg Fox is the sort of performer whose name comes up in a variety of contexts. Though perhaps most often associated with Liturgy, the human drum machine is also currently playing with Guardian Alien — his one-time solo project, which is currently a duo including Alexandra Drewchin of Eartheater — and Ex Eye, a new band formed with Colin Stetson. He also has an ongoing pairing with fellow drummer Kid Millions of Oneida known as Fox Millions Duo.

It probably shouldn’t be surprising that Fox’s appearance at this year’s Roskilde Festival wasn’t limited to one set. But when you consider how exhausting a festival can be for a mere spectator, Fox’s three performances over as many days with as many bands is damn impressive. Unsurprisingly, Fox was difficult to track down between sets, but he answered a few questions for us via email after the festival.

How was your Roskilde experience?

I enjoyed Roskilde. It is a huge, overwhelming festival, so luckily the backstage area for artists was very hospitable. The food was great and it was easy to relax back there.

How do you prepare for three days of shows with three different projects?

Regarding preparation, there isn’t much to it, really. More than anything I try to prepare for presenting a full set for the audience. Seventy-five minutes is longer than most sets I tend to play, so there was some thought and planning given to what material to play and how to structure the sets. The nature of Fox / Millions duo and Guardian Alien involve more improvisation within a predesigned structure, so clearly outlining those structures was the main aspect of the preparation. For Ex Eye, it’s a matter of playing the material we have been writing, so not much to do before that set besides stretch!

How did you end up playing with Ex Eye?

Colin and I had been talking about doing a “heavy” project together for a while, both of us being fans of what you might consider various forms of extreme music. Shazhad [Ismaily] has been a longtime friend and collaborator, and one of my favorite people to play and travel with, so him being in the project was a no brainer, and Toby [Summerfield] is an old friend and collaborator many times over of Colin’s, so at his suggestion Toby came on board. That’s it really. We just wanted to start a new project, so we did!

Fox Millions Duo is a fairly unique set up. What inspired the project?

What inspired the duo is mainly just Kid and I really enjoying each others’ playing and company. We have a good time together. We were asked once to do a “drum off” as an opening act for a Lightning Bolt show, and instead we decided to come up with something collaborative. And it just went from there. I think we will definitely be making another record soon.

Guardian Alien has been through a few incarnations now. Is it going to continue to evolve?

I don’t know if i can speak to any kind of permanence regarding anything at all, so it’s hard to say – but I definitely enjoy the current duo lineup of Guardian Alien. Yes we have been working on new material, using new instruments and technologies, and we are very excited about what we have been creating together.

How is Guardian Alien different from your other work?

Guardian is different than other work that I do because Alex is my partner in the non-musical realm first and foremost, so the collaboration is obviously different than it is with other people. We know each other extremely well, for better and for worse, and we also love each other very much — and we share our lives with each other. So in many ways doing Guardian as a duo with her is really joyous and fun, and in other ways it can be very challenging. But I think that challenge makes for better creative outcomes.