Welsh indie poppers Joanna Gruesome have had a busy 2015:  They’ve released a new album, Peanut Butter, original singer Alanna Mcardle left the band, and they’ve gained two new vocalists in Kate Stonestreet and Roxy Brennan. The new line-up played their second-ever show on the Pavilion Stage at Roskilde, and they answered a few questions for us before running off to see Nicki Minaj.

Watch the video below to hear their thoughts about the new record, nudity at Roskilde, and the genres of imaginary bands with pun names:

There are some bands that are compelling for the racket they make rather than the performance they give, and Girl Band are one such band. The four boys from Dublin play loud, blistery post-punk of questionable aptitude — not a lot of proper chords, and lots of beer bottle slides — with curiously serene expressions on their faces. Their singer has perfected both a throaty yowl and a pose where he grabs hold of the mic stand and pops his hip at a sharp upright angle. Aside from his constant, aggressive tugging at his shirt, it’s all very casual. Even the between-song chatter betrays a friendliness or at least an as-yet undeveloped ability to talk to the audience without breaking character. But it doesn’t matter how chilled out they look when they play or harmless they seem when they talk when there’s a constant thud-thud-thud making people give themselves whiplash while standing in place. — AF

To the casual observer Joanna Gruesome’s lightning-fast set at Pavilion is simply a welcome moment of fun, noisy jangle-pop from an impressively down-to-earth band. But simply counting the people on stage is indication enough that something up: billed as a five piece, today Joanna Gruesome consists of six people. Behind the feedback and sweet melodies there is the story of frontwoman Alanna McArdle’s departure of the ban–citing mental health issues–and the subsequent inclusion of Kate Stonestreet and Roxy Brennan. But other than being a little cramped on the small stage, everyone is working well together. The three vocals work well, melding sweetness with harshness in tandem with the guitars. Later on in the day we learn that this is their second-ever gig as a six-piece, which explains some of the initial awkwardness, but mainly proves the dedication every band member, new and old, to succeeding in spite of adversity. — CC 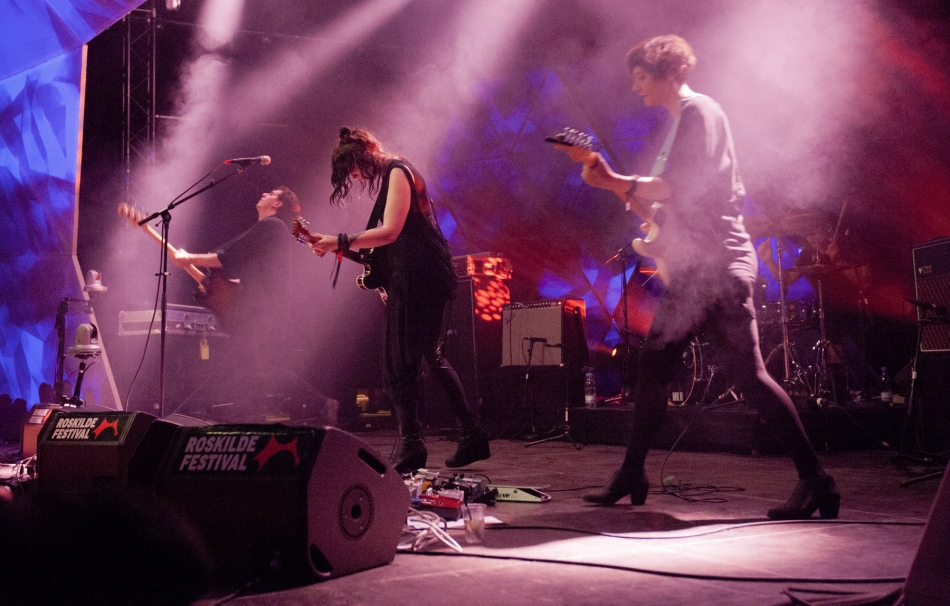 The slightly oppressive darkness of Gloria seems to suit Chelsea Wolfe, adding another surreal texture to her brooding, quasi-doom compositions. Drawing from material from her 2013 album, Pain is Beauty, Wolfe and her band do a good job of making you forget the sun outside. Guitars drone and snarl under her delicate vocals, while the drumming is absolutely impeccable. On songs like “House of Metal” they appear to contract and expand the time of the song, resulting in a hypnotising series of rhythmic waves.

Wolfe herself is on the quiet and reserved side, thanking the audience a couple of times, but otherwise remaining within her aloof persona. Then again, hers is an act that draws precisely on that theatricality. A real standout moment is the song “Iron Moon”, which manages to sound more like PJ Harvey than most recent PJ Harvey records do. It sounds like a lazy analogy, but those vocals are pure Polly Jean, and at any rate, the guitar tone alone is enough to earn Chelsea Wolfe a reputation as a must-see performer. — CC

As the bassline of “Ob-La-Di, Ob-La-Da”—the runt of the White Album, and possibly the worst thing McCartney has ever done—wafts over from Orange stage, Deafheaven have come to provide some welcome relief. The San Franciscan five-piece has been a mainstay of hip European festivals for the last two years, bridging the gap between black metal and shoegaze revival, and gathering considerable critical praise. Their set at Beta last year confirmed their reputation as an intense and skilled live act.

As they tear through material from Sunbather and Roads to Judah, the band demonstrate themselves to be the perfect act to help push us into the small hours: intensely energetic, uplifting in a gently melancholic sort of way. Slow instrumental tracks like “Irresistible” allow a little Red House Painters-esque reprieve from an otherwise blistering set. Frontman George Clark is in fine form, throwing himself into the crowd, beating his chest and contorting his face into grimaces that fail to disguise his boy-band looks.

But as usual it is the compositions of Kerry McCoy and the effortlessly precise drumming of Daniel Tracy that really stand out. And sure, sometimes the songs do sound quite a lot like Slowdive, but is that really such an awful criticism? — CC

It’s a tall order for a band to make their live debut at a festival the size of Roskilde, but that is what Amalie Bruun, the woman behind Myrkur, has done. The project is described as black metal, but Bruun has done a good job prettying things up; she has a strong, beautiful soprano and is backed by a chorus of women. It’s in sharp contrast to the machine-like drums and fractal short circuiting of the guitars. Bruun holds her own as a screamer as well, and her dual-microphone stand encased in a tree branch is delightful in its own right.

There are the usual first show glitches, and it’s understandably not the tightest set. Though Paul McCartney is still playing through her set, Pavilion is full. Perhaps the only way to compete with a living legend is to put up a hometown girl backed by a choir of hometown girls. — AF

Africa Express–less a band than a mini-festival in itself–is a chance to catch a lot of bands such as Songhoy Blues and Jupiter and Okwess International who performed earlier in the festival, as well as trying to spot celebrity guests amongst the line-up. Spotting Graham Coxton in the wings messing around with a Telecaster instantly upped the excitement of these two Blur fans.

There are times when the camera pans to Albarn when it really could have stayed focused on other performers or DJs. It’s a subtle reminder of who is considered the priority instead of who is ostensibly the star of the show.

Ultimately, we couldn’t make it through the set, checking out sometime in its fifth hour. It was disappointing, because it was exactly the kind of late night party you want to end a festival with, and as we hear more and more about the artists and songs we missed out on. But if this train rolls through again as an evening with Africa Express, we’ll be at the front of the queue. — AF

The fourth and final day of Roskilde 2019 greeted us with a one-two punch of positivity and
As the sun shines and gives us respite from a day of chill and damp, Aldous Harding
Every Roskilde Festival includes the weather debate. Ideal weather for a festival isn’t as straightforward as it
Go to Top