If there was one flaw in the Africa Express set from last year, it was timing. The four-hour performance started at about 10pm on the last night of Roskilde, and as marvellous as it was, we simply didn’t have the energy left to stick it out.

So Africa Express presents the Orchestra of Syrian Musicians with Damon Albarn and Guests (not the snappiest title, to be honest) was a wonderful way to open the Orange Stage. And with this set running only two hours, there was no threat of Albarn being carried off the stage again, though of course it was mentioned.

This night was not about Albarn, though. Aside from an extended version of “Out of Time,” where Arabic string arrangements melted the song into something romantic and beautiful, and a cover of the Beatles’ “Blackbird,” sung with the Syrian choir and Julia Holter, he remained in the background. Even from the perspective of a longtime fan of his work, that’s fine, because the best moments of the set belonged to other performers.

Mounir Troudi not only floored us with his voice, but is so delightful to watch in his performance with his enormous smile and fanciful dancing that it’s almost unbearable. Someone please bring him to Koncerthuset so we can enjoy a full concert. Lebanese/Algerian artist Malikah, performing with both Noura Mint Seymali and with Bu Kolthoum, has us realizing that we need more Arabic hip-hop in our lives.

And lest anyone doubt the political nature of this performance, Albarn opened the set by declaring “keep borders open” and ended it with his fellow musicians leading the crowd in a chant of “Syria.” Well said. Welcome in. — AF

Standing there in her thin black dress and golden jacket and shining with her pale, smiling face, obviously grateful for the people crowding this years’ first concert at Pavilion. And then she starts singing, Aurora Aksnes, 19 year old from Norway, and nothing is stronger than the voice from this young, tiny woman.

She really can make some unbelievable sounds with her voice, both on record and not least live at Roskilde, that just fits her gripping, explosive electro pop-songs somewhere between Björk and Sia. That was the formula from the minute she entered the stage until she left only 40 minutes later, leaving the crowd hungry for more of her pop songs that have this cold Nordic melancholy underneath it all. 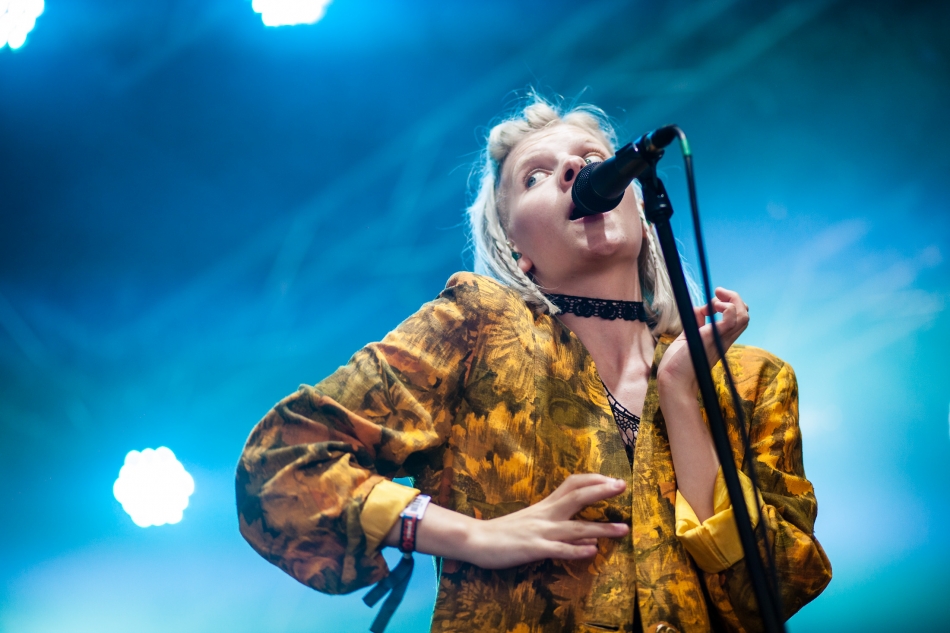 This really was a lively concert, but that was also the weakness of her performance. It was too much the same pop formula, and that was a shame. Aurora is so, so talented, and she makes adorable pop songs like the irresistible “Running With The Wolves” — which also lifted the concert to pure magic — but she is also very interesting, when she is vulnerable in a more acoustic setting, and that side of her could have varied the show.

Instead she chose the safe path. It also left her too bound to the microphone — and therefore dancing too little to her own beats, making her performance too static. Because she did dance, especially during her last few songs, and when she did it all went ecstatic and made the crowd wonder, why she was only on stage for 40 minutes. Way too short for such a gorgeous singer. — JG

At the Drive-In — Arena

The archival footage of At the Drive-In from their initial run (which ended in 2000) shows a band that could easily destroy a stage and possibly themselves. Sure enough, within three songs, an amp head has been lost, a speaker has been toppled, and frontman Cedric Bixler is scaling the rubble and making life difficult for whatever poor manager is responsible for repositioning their abused equipment.

It’s what was hoped for, but it’s not sustained at that level. Though watching Bixler swing his mic stand around during “Invalid Litter Dept.” makes me afraid for the safety of the band members around him and anyone within throwing distance of the stage, the mid-set song list slowly devolves from crunchy to spacier tracks that would likely appease any Mars Volta fans that had wandered in. 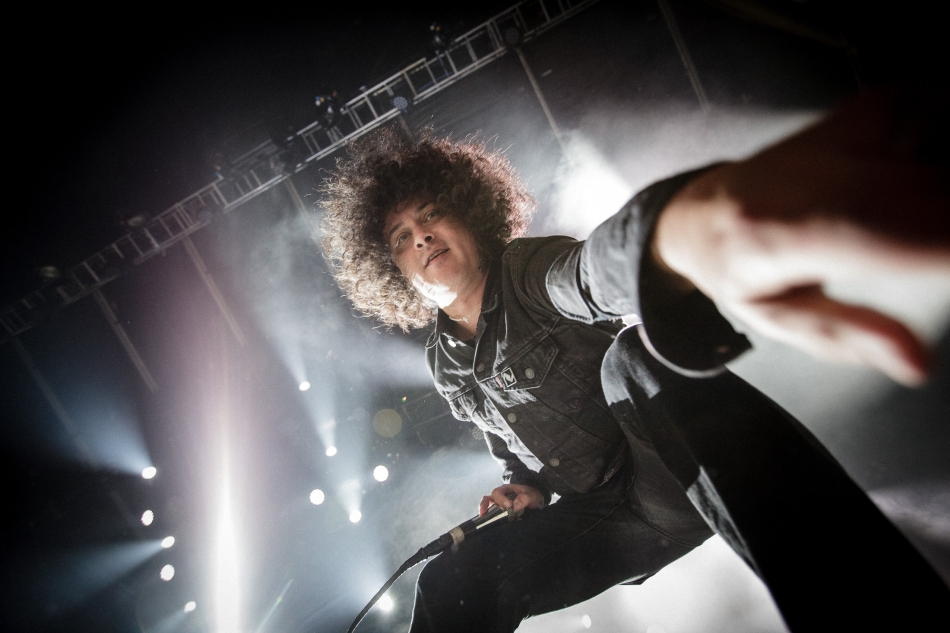 Bixler’s between song banter is as unpredictable as his physical performance, with comments ranging from the abstract to the inspirational anyone-can-do-this to the reflective. Whether or not it’s a standard line of his, it’s seems genuine when he thanks the crowd for caring about a band that broke up 16 years ago and never played venues of this size.

That’s the note on which they launch into “One Armed Scissor,” the only song they could end their set on. And it sounds way tighter than any of the old videos ever suggested. And all of the energy they started with is there in droves. If the new material that’s been rumored ever surfaces, you can’t blame us for holding it to this standard. — AF

The ingredients are simple: You take a soulful voice. You take some intriguing beats and some guitar. And then you mix it with raw energy and a utterly talented performer. In the bowl you get Alex Vargas, who made a mind-blowing performance in a totally packed Gloria, leaving hundreds of people disappointed outside.

His voice goes from deep and rootsy to precise falsetto, without any sign of uncertainty whatsoever, and complemented by overwhelming visuals in the dark room of Gloria. These features transformed the room into a feeling of music, of rhythms, of pureness and art. And it lifted the concert to heights that are be revealed on much larger stages in the coming years for the 28-year-old, gifted Danish musician. For sure. — JG

Hinds are fresh off their appearance at Glastonbury, and apparently they had a rough time of it. As such, they’re rather happy to be at Roskilde, and the packed Pavilion stage seems just as happy to have them.

The Spanish quartet combine a little surf with a little rockabilly, some very pretty vocal harmonies, and a whole lot of party. There are plenty of surf revival bands out there, but Hinds knows how to sell it, bouncing around with endless energy, posing like a hair metal band, and singing so sweetly it almost seems like a con. 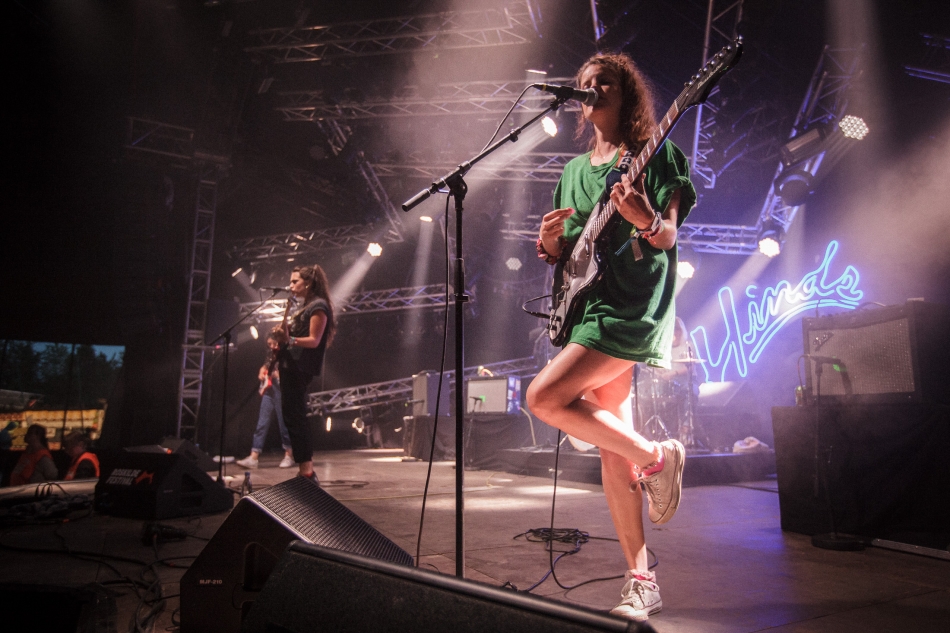 They ended their set by coyly relating how their final song usually prompts stage invasions, before a ready volunteer presented himself and one of the guitarists launched herself into the crowd. If we see any other band this festival with as much sheer joy as Hinds exudes, we’ll be very lucky indeed. — AF

One question rose above all in front of the Orange stage this beautiful evening: Would Red Hot Chili Peppers make up for the disaster of their last visit?

It’s fair to say that the headlining concert had a pre-history after Anthony Kiedis & Co made their scandalous bad performance on the same stage nine years ago, leaving the crowd and critics stunned, some even asking the festival to get their money back. And the answer to the question is a clear and profound no.

The reason is a lazy and limp performance, especially from singer Anthony Kiedis. To be fair, it actually seemed that the rest of the band tried to put in an energetic performance. Flea was Flea, a purple-pink-haired dynamo circling around the stage in a suit that made him look like some gear from outer space. And both the permanent John Frusciante-replacement Josh Klinghoffer, guitar, and Chad Smith, drums, seemed to invest themselves in the songs, with  Klinghoffer notably putting some soul in the strings. But it all faded in the light of Kiedis and his Bermuda shorts. He went on and off the stage and looked like someone who did not know why he was on that stage this evening. And somewhere between the sing-alongs “Scar Tissue” and “Californication”, the dull jam-sessions and songs from their latest, quite excellent record The Getaway, the question appeared: Are they really happy being up there on stage?

In their 90 minutes set, the iconic band did not do much to convince that they have a future in such big venues. And when their past with so many strong and even immortal songs plays such a small and weak part in their setup, the answer to all this is even more doubtful — and the performances of “Under The Bridge” and “Give It Away” were oddly trivial.

It just seems that Roskilde Festival and Red Hot Chili Peppers are a bad match, and the festival should have no intentions of getting them back on that stage. Ever. — JG

The last show of the evening was a journey with three space cadets of trance rock. These guys do live what they do on record, delivering repetitive, looping ten minutes moods, slowly building towards the climax and echoing krautrock-explosions, when they stepped out of the dark shadows on stage. Föllakzoid suited the venue and the after-midnight-atmosphere perfectly, transforming the Pavilion to a late night dance party that could just go on and on and on and on and never stop, before entering space in the dead of night, tired and fortunate. — JG